Please ensure Javascript is enabled for purposes of website accessibility
Log In Help Join The Motley Fool
Free Article Join Over 1 Million Premium Members And Get More In-Depth Stock Guidance and Research
By Lee Samaha - Oct 23, 2017 at 5:29AM

Looking ahead and analyzing the construction machinery company's upcoming earnings.

Caterpillar Inc. (CAT -0.26%) stock has soared in 2017, on the back of a string of consensus-busting earnings and analyst upgrades. The main reason has been its improving construction, mining, and energy industry verticals. Moreover, analysts have recently raised price targets for the stock in anticipation of a strong set of third-quarter earnings.

Clearly, the company has a lot of good momentum behind it, but can it continue? Let's preview the earnings report that comes out on Oct. 24 to see what investors need to keep an eye out for. 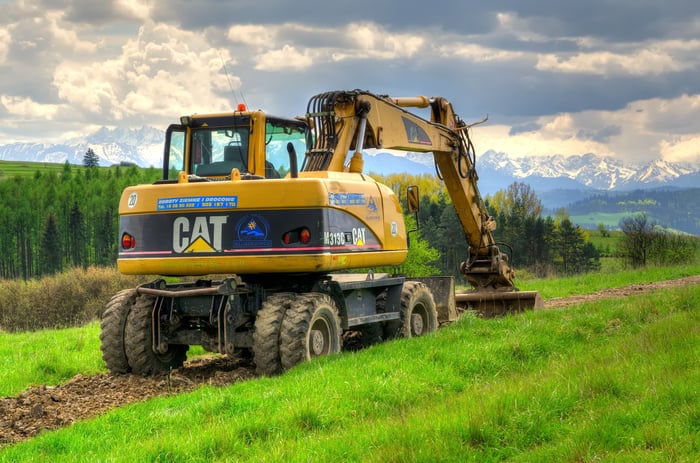 Here are some estimates for the full year 2017.

That said, the current analyst consensus is above management's guidance range, so the market appears to be expecting a guidance increase in the results. It's definitely something to look out for, because the stock could be at risk if management doesn't deliver a good sales growth and margin outlook. For example, Deere & Company (DE 0.72%) stock took a notable hit after the company's third-quarter earnings report disappointed with its margin outlook.

An analysis of how Caterpillar makes money reveals that construction is its key long-term end market. Although the cyclicality of its energy and resources revenue creates near- to mid-term earnings volatility that can be the swing factor in its stock-price movements, the health of the construction industry is still the long-term consideration.

Indeed, it's part of the reason some investors prefer Caterpillar to Deere, a company more focused on the agricultural equipment sector. Looking ahead to Caterpillar's upcoming earnings, we can see two reasons to believe in a Caterpillar surprise on the upside with its construction numbers and commentary.

Deere's full-year worldwide construction and forestry segment outlook has strengthened significantly as the year has progressed, from 1% full-year sales growth last November to 7% in February, 13% in May, and 15% in August. Note that Deere's last earnings came in August, compared to July for Caterpillar.

In addition, U.S. residential and construction spending continues to improve in 2017, while the market waits for a potential boost in infrastructure spending from President Trump. 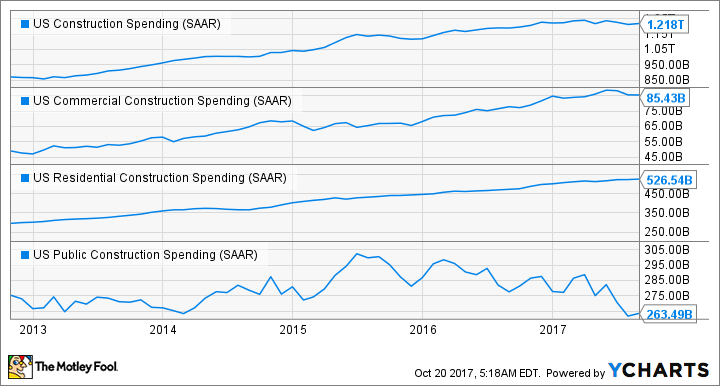 Investors shouldn't underestimate the importance of the country and the Asia-Pacific region on Caterpillar's earnings this year. There's no doubt that better-than-expected economic growth in China has positively affected earnings at industrial companies this year. For example, Caterpillar's segment equipment sales rose by 10% to $10.6 billion in its second-quarter, and a breakout of the numbers demonstrates the contribution made by improving end markets in Asia/Pacific in the quarter. Here's a look at the company's Q2 sales improvements:

The question is, what will China's GDP growth be in the second half of the year? In particular, will capital spending in its mining and construction end markets be as supportive to Caterpillar's sales as they were in the first half? It's something for investors to focus on, because many economic commentators are expecting China's rate of GDP growth to slow in the second half.

Whenever a stock has the kind of strong run-up in stock price that Caterpillar has -- up nearly 50% in the last year -- it usually makes sense to keep a close eye on developments. I would argue that Caterpillar's stock needs a guidance boost to keep going higher, along with a combination of strong U.S. construction spending and ongoing China GDP growth. These are three key things to focus on in the upcoming results.