Companies continue to pay a premium for commercials airing during football games.

The NFL is currently dogged by controversies involving player safety and politics, but companies are still paying big bucks to advertise during its televised football games, according to Ad Age's annual pricing survey.

Football took the three most expensive advertising slots for the 2017-2018 season, followed by three popular scripted shows: NBC's This Is Us, Fox's Empire, and CBS' (PARA 2.15%) The Big Bang Theory. 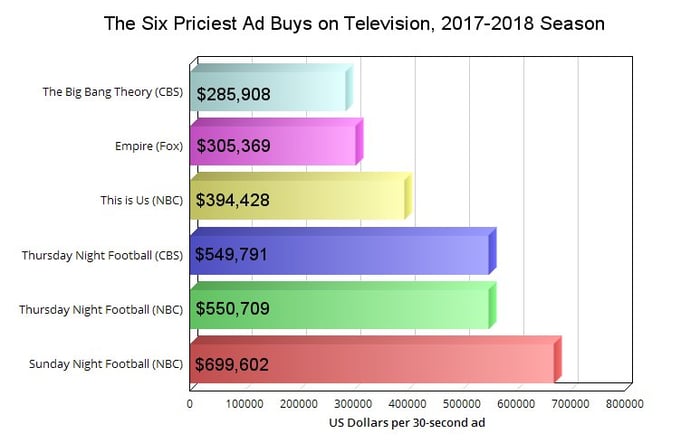 Advertisers also paid more for ads this season, with the average price of a 30-second ad on broadcast prime-time TV rising 6% year over year to $134,009. This shows that despite the rise of online advertising, prime-time TV ads remain a reliable way to reach millions of viewers.

However, viewership continues to drop due to cord-cutting and the rise of streaming platforms like Netflix. The top four broadcasters reported a cumulative 8% decline in prime-time viewership in the coveted 18- to 49-year-old demographic compared to last year.

That's why the major networks are launching streaming platforms -- like CBS All Access and NBC Sports Gold -- to counter that trend. But these packages have ad-free tiers, so advertisers could be cut of the loop by premium subscription plans.