Aside from a brief failed experiment when my wife and I moved from Connecticut to Florida, we have always been dedicated cable customers.

At our main home, a condo in West Palm Beach, Fla., we have AT&T's (NYSE:T) DIRECTV, because that's what our building offers. We spend over $150 a month for a package that includes HBO and a very solid lineup of channels. We also have Netflix (NASDAQ:NFLX), Hulu, and Amazon.com (NASDAQ:AMZN) Prime subscriptions. We're spending more than we want, but given that we have different tastes in television, as does our 13-year-old son, it's generally worth the money.

When we decided to buy a vacation home, a little place outside Orlando, I balked at the idea of spending big money for cable. Since we were only going to be there part-time, I thought pay television was a good area to save some money on.

In choosing to do that, we've learned that cord-cutting does not have to mean sacrificing. What we're doing in our second home wouldn't quite work in our main residence, but it has proved to be a very viable option. 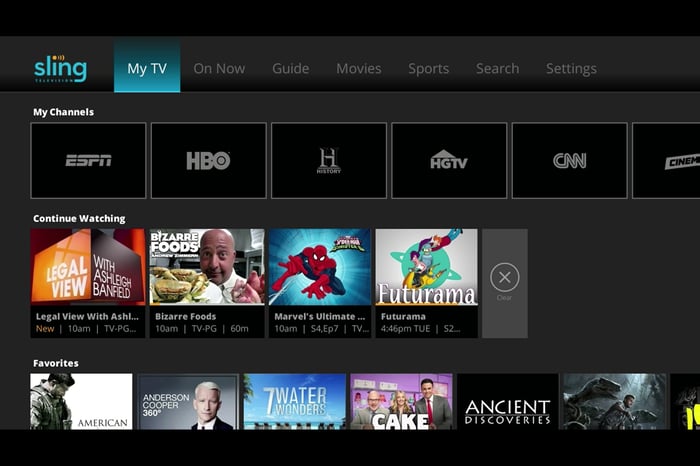 Sling TV has been a big piece of our alternative TV package. Image source: DISH Network.

How did we cut the cord?

Instead of spending roughly $100 month for a basic package from either DIRECTV or one of the other two traditional cable providers in the area, we opted for a mix of streaming services.

I'm not counting Amazon Prime as a cost because we pay for it primarily for the free two-day shipping. In reality, the only new monthly fee we added for the second home was the "Blue" package from DISH Network's (NASDAQ:DISH) Sling TV, which gave us access to a number of live-streaming cable channels, including USA, HGTV, and TBS.

The biggest change between our two locations is that in West Palm Beach, our efforts to grab free over-the-air channels using an antenna didn't work well. Interference or poor signals limited our choice to almost nothing, meaning we had no access to local weather, traffic, and news.

At our new home, a $20 antenna grabbed affiliates for most major broadcast networks as well as an assortment of other programming. Better yet, Roku offers an "Antenna" app allowing us to bounce between Sling, Netflix, Hulu, Prime, and over-the-air stations without switching inputs on the TV.

Between the various streaming services and the over-the-air channels we can pick up, I'd guess we can receive 75% to 80% of the programming we get through DIRECTV at our main home. Some of the broadcast networks have mediocre pictures, and I miss the ability to flip around quickly between channels, but in general, cutting the cord (or in this case simply never hooking it up) has paid off. We lack a DVR, but Sling has some on-demand programming, while Hulu has lots of current shows.

Not having traditional cable is a bit of a sacrifice, but the ability to get over-the-air channels makes the sacrifice worth the savings. I'll have to go to a bar for Monday Night Football since I don't have ESPN, and there are definitely some channels I miss that DIRECTV offers.

In reality, though, having spent the equivalent of a few weeks at the new home, I've mostly caught up on my Netflix queue while using Sling for a bit of live TV. Add in the ability to check the weather on local channels, and I'm saving significant money while not feeling like I'm making a sacrifice.