Which of these tech titans is the best choice for your portfolio?

Apple (AAPL 0.41%) versus Microsoft (MSFT -0.33%). These archrivals have battled against each other for decades, all the while rewarding their shareholders with the spoils of war.

Apple's economic moat is built around the strength of its ecosystem. The iPhone is its Trojan horse into consumer's lives. The high satisfaction rates among iPhone buyers tend to lead to additional Apple purchases, such as iPads and Macs. This "halo effect" is further strengthened by Apple's growing collection of services, with iCloud, iTunes, App Store, Apple Pay, and Apple Music all helping to add additional layers of "stickiness" to Apple's ecosystem. So once a person becomes an Apple customer, he or she tends to remain one.

Microsoft, on the other hand, has recently seen a major portion of its competitive moat crumble. Windows was a major driver of Microsoft's rise to dominance in the '90s, and for many years the PC operating system comprised the core of Microsoft's competitive strategy versus its rivals. Yet, analogous to how the Germans bypassed France's Maginot Line in World War II, Apple circumvented Microsoft's well-defended PC operating-system business with a mobile offensive. 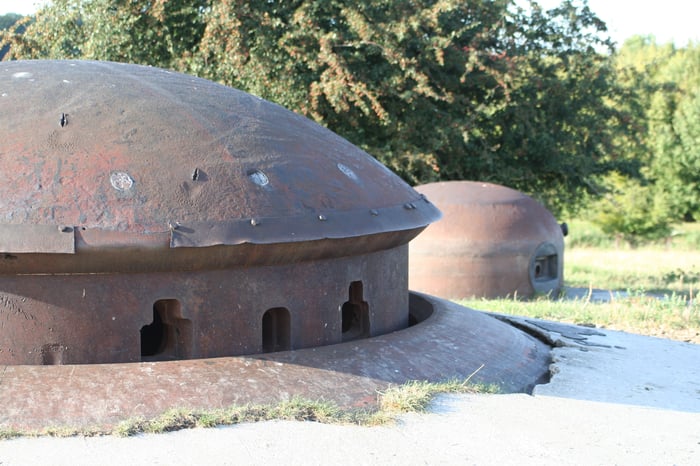 Apple knew that it could not overtake Microsoft's dominant desktop-computer market share with a direct assault, so it instead attacked its opponent's relatively unprotected mobile OS flank. By the time Microsoft attempted to launch a counterstrike with its Windows Phones, it was too little, too late. Moreover, Apple's victories in mobile have allowed it to expand its beachhead in desktop computers, with Macs steadily taking share from Windows-powered PCs in recent years.

Though these two tech titans compete in several other areas, Apple's success in the mobile wars gives it the edge in terms of competitive moat.

Apple and Microsoft are both powerhouse businesses, but let's look at some key metrics to see how they stack up in regard to financial strength.

Apple's and Microsoft's financials are staggering. With more than $50 billion and $30 billion in annual free cash flow, respectively, and $400 billion in cash and investments between them, these tech giants are colossal cash-generating machines. Yet as impressive as Microsoft is in these areas, Apple's profitability and balance-sheet strength are simply unparalleled.

Over the past half-decade, Apple's revenue growth outpaced that of Microsoft by about 10%, while Microsoft's earnings per share rose faster than its longtime rival's EPS by a comparable margin. 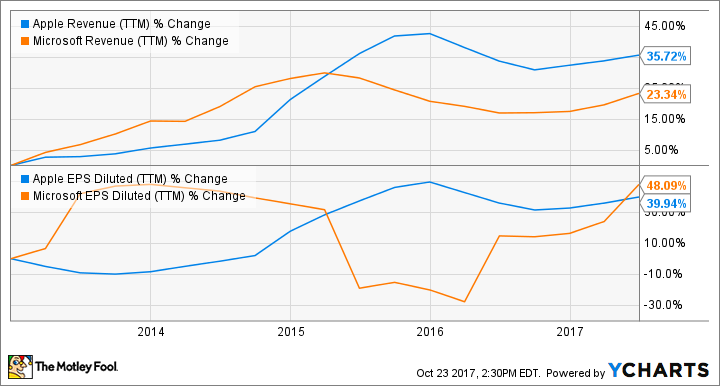 Over the next five years, Wall Street expects Apple and Microsoft to grow their EPS at similar rates: 12.37% for Apple and 11.45% for Microsoft. That's too close to give either company much of an edge in terms of growth.

No better-buy discussion should take place without a look at valuation. Let's check out some key value metrics for Apple and Microsoft, including price-to-sales, price-to-earnings, and price-to-free-cash-flow ratios.

On all four metrics, Apple's shares are far less expensive than Microsoft's, making it the better bargain.