With revenue and adjusted EPS growth of 6.5% and 1%, respectively, the toymaker did a good job managing the challenges associated with the Toys R Us bankruptcy filing and continued softness in the U.K. and Brazilian markets.

Toymaker Hasbro (HAS -0.65%) reported third-quarter 2017 results before the market opened on Monday. Revenue grew 6.5% and adjusted earnings per share edged up 1% from the year-ago period.

The market sent Hasbro shares tumbling to a closing loss of 8.6% on Monday. The culprit wasn't the third-quarter results, which were better than many investors probably expected, but the company's tepid fourth-quarter outlook. The toymaker expects the holiday quarter's year-over-year revenue to increase 4% to 7%, whereas Wall Street analysts had been projecting a jump of 11.5%. The Toys R Us Chapter 11 bankruptcy filing and ongoing challenging economic environments in the U.K. and Brazil were the reasons cited for the weaker-than-anticipated guidance.

After Monday's drop, shares of Hasbro have returned 16.5% in 2017, on par with the S&P 500's 16.4% return. Shares of Hasbro's primary rival, Barbie maker Mattel, meanwhile continue to mightily struggle, returning negative-41% for the year.

Revenue included a favorable $29.6 million impact from foreign exchange. Reported earnings include an EPS benefit of $0.04 compared with the year-ago period resulting from the adoption of a new accounting rule related to employee stock shares. The adjusted EPS comparison excludes this benefit.

For some context -- though long-term investors shouldn't place too much importance on Wall Street's near-term estimates – analysts were expecting adjusted EPS of $1.94 on revenue of $1.78 billion, so Hasbro breezed by the earnings expectations and slightly beat the revenue consensus. 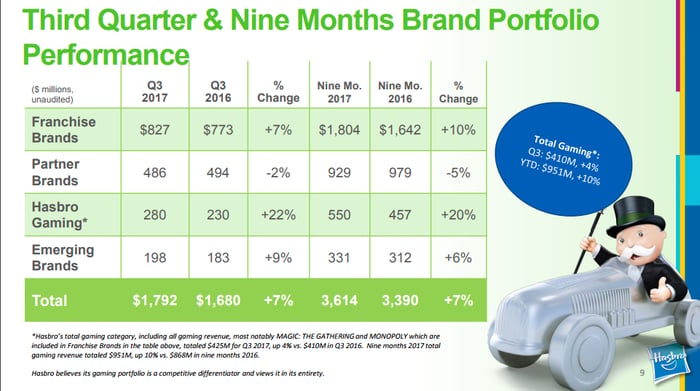 Growth in franchise brands was driven by Nerf, Transformers, My Little Pony, and Monopoly. For partner brands, growth in Beyblade, Disney's Star Wars, Disney Descendants, and Sesame Street was slightly more than offset by declines primarily in Yokai Watch and DreamWorks' Trolls. Partner brands' results can be very lumpy because this category is driven by movie openings.

Hasbro gaming -- the quarter's superhero category -- experienced broad-based growth across its portfolio, as was the case last quarter. Emerging brand growth was primarily driven by Baby Alive and Furreal Friends.

In light of the challenges surrounding the Toys R Us bankruptcy filing and the ongoing softness in the U.K. and Brazilian markets, Hasbro did a commendable job in the third quarter. While revenue from partner brands continued to fall slightly short of the year-ago period, this was largely expected and due to the movie release schedules of its partners.

Main growth catalysts for the fourth quarter include the releases of My Little Pony: The Movie, Disney's Thor: Ragnarok, and Disney's Star Wars: The Last Jedi. Next year promises to be brighter on the partner brand front, thanks to a fiscal 2018 movie slate that looks much stronger for Disney than its 2017 lineup was.

As mentioned, Hasbro expects fourth-quarter revenue to grow 4% to 7% from the year-ago quarter. While this is lighter growth than many investors probably expected, the reasons behind it are largely out of Hasbro's control. Investors should take a longer-term view of the company than one or two quarters.