Please ensure Javascript is enabled for purposes of website accessibility
Log In Help Join The Motley Fool
Free Article Join Over 1 Million Premium Members And Get More In-Depth Stock Guidance and Research
By Andy Gould - Oct 23, 2017 at 8:05AM

Will the payroll and workforce management software provider top expectations once again?

Paycom Software (PAYC 3.94%) is scheduled to report its third-quarter earnings on Oct. 31. With the stock up more than 70% year-to-date, investors are betting that Paycom's cloud-based human capital management (HCM) software will continue making inroads at the expense of larger competitors like ADP. With expectations running as high as ever, here are a handful of items I'll be looking for to see if Paycom can continue its overachieving ways. 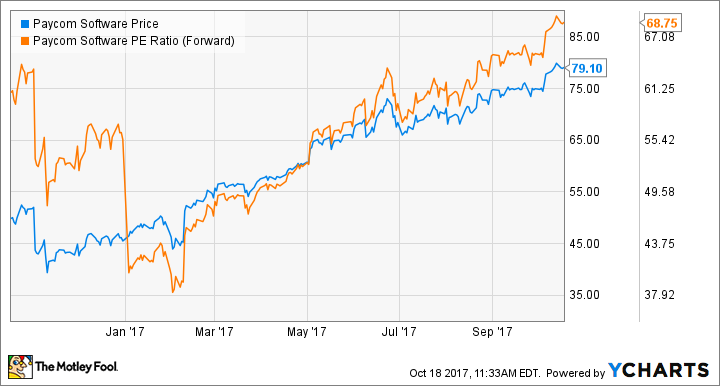 The evolution of Paycom's competitive position

Paycom generally focuses its sales efforts on smaller companies in the 50- to 2,000-employee range, many of whom use multiple software vendors to manage things like payroll, time entry, hiring, compliance with government regulations, performance reviews and more. Replacing multiple single-vendor solutions with Paycom's all-in-one offering can eliminate integration issues, saving time and money, while simplifying things for employees and management alike. 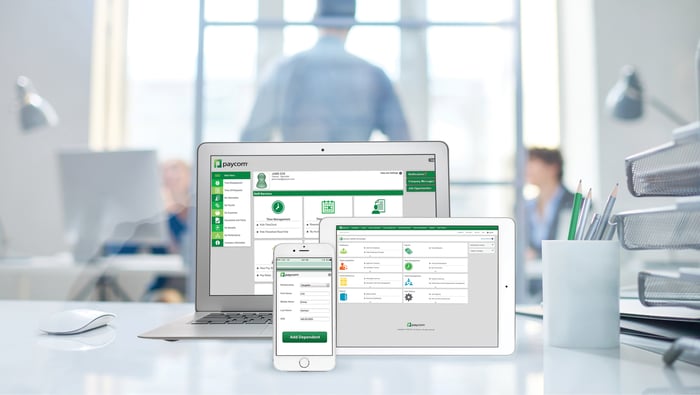 Essentially all of the business Paycom wins comes at another company's expense. Citing the competitive nature of the industry, CEO Chad Richison has compared every customer win to a dog fight. And while Paycom isn't generally the low-cost provider, the company's ROI-driven sales efforts have helped it steal share from established players including ADP and Paychex for years. Besides carving out a niche with the smaller companies in its target market, Paycom has been steadily attracting new customers in the 2,000-to-8,000-employee range as well, although the company no longer announces these larger wins on conference calls due to client confidentiality issues.

While Paycom's competitors aren't resting on their laurels, earlier this year Richison said that "... the competitive landscape as we see it has remained substantially the same for a long period of time ..." On the earnings call, I'll be listening for any remarks about the aggressiveness of Paycom's competitors, and whether the sales environment is getting more challenging.

A higher bar for revenue growth

In the first and second quarters of 2017, Paycom's revenue easily topped analyst estimates as well as its own guidance. Third-quarter revenue guidance is a range of $99 million to $101 million, which represents 29.3% growth at the midpoint, roughly in line with Paycom's long-term target of 30% annual revenue growth. On average, analysts are expecting quarterly revenue of $100.4 million.

In each of the previous two quarters, Paycom also raised its full-year revenue guidance, up to its current range of $429.5 million to $431.5 million, which reflects 31% annual growth at the midpoint. If Paycom beats expectations a third consecutive time, it wouldn't surprise me to see the company raise its full-year guidance once again. On the other hand, with such a cheery consensus baked into the company's stock, missing estimates would likely cause shares to plummet.

What's going on with expenses and margin?

Paycom has been sacrificing its profit margin a bit as it invests heavily in R&D, new sales offices, and marketing to maximize its top-line growth. Specifically, the company's quarterly R&D expenses have been rising at rates of 80% to 100% year-over-year as it continues to develop new modules for its software.

Similar to the revenue side of things, in each of the previous two quarters, Paycom has raised its full-year adjusted EBITDA guidance. A third-straight "beat and raise" quarter would set Paycom's margin on a course for an all-time yearly record. The company believes there's still room for improvement from current levels, setting a long-term adjusted EBITDA margin target of 30% to 33%.

Expectations are, shall we say, steep

As you might expect, the hard part in investing in a rapid-growth stock like Paycom is stomaching its extreme valuation. While Paycom has never exactly looked cheap, shares today are trading at a forward price-to-earnings ratio of just under 70, which is as pricey as it's ever been by this measure. While there's no apparent weakness in the company's business, investors are clearly expecting years of robust growth at current prices. I think Paycom remains a good candidate for buying on dips, so long as you can handle what's likely to be a volatile ride in the years ahead.