In the phase 3 trial called PEPITES, 35.3% of patients responded to Viaskin Peanut after 12 months of treatment compared to 13.6% of patients who received placebo. While the 21.7% difference in response rate was substantial, the trial was set up so that it would only pass if the lower end of the 95% confidence interval was above 15%. Unfortunately, the 95% confidence interval -- a statistical measurement of where the difference in response rate would likely read out if the trial was repeated multiple times -- was 12.4% to 29.8%, just missing the 15% threshold.

DBV Technologies noted that the secondary endpoint, the cumulative reactive dose, which measures the amount of peanut protein a patient can have before reacting, showed patients who took Viaskin Peanut tolerated an average of 900 mg of peanut protein compared to 360 mg for patients who received placebo. Unfortunately, the Food and Drug Administration generally doesn't care about secondary endpoints in trials that don't pass the primary endpoint.

Nevertheless, DBV Technologies plans to continue with its application to the FDA. Data from a second phase 3 trial, REALISE, testing Viaskin Peanut in children treated for six months, is scheduled to be released next month. 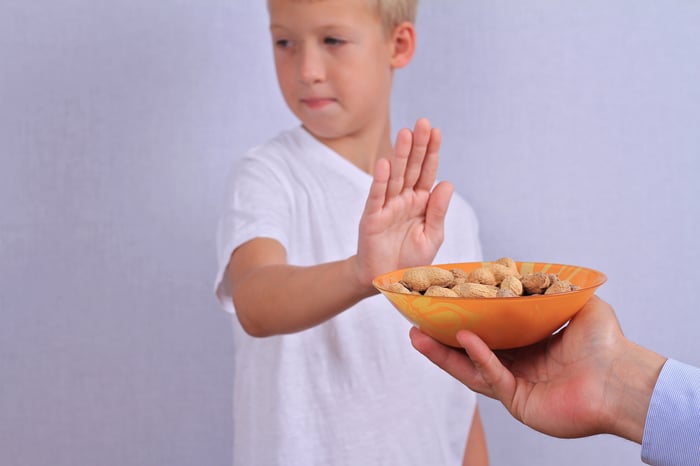 Aimmune Therapeutics' peanut allergy treatment, AR101, isn't too far behind Viaskin Peanut with data from Aimmune's phase 3 PALISADE trial due to be reported in the first quarter of next year. Aimmune Therapeutics is also running a second phase 3 trial, called ARTEMIS, in children and adolescents, although that trial only started a few months ago.

Positive data from REALISE would strengthen DBV Technologies' FDA application, but history shows it's hard to get past the agency batting .500. That being said, the FDA is arguably more lenient than it has been in the past, so it makes sense for DBV to roll the dice and submit a marketing application.

DBV Technologies' failure is certainly good news for Aimmune Therapeutics, which deserves to be up today, but the just-missed-it failure should also be a reminder that biotech is risky and drugs can be derailed for statistical reasons even when the drug otherwise appears to be working.