The company plans to announce new data for its experimental peanut allergy drug this week.

Shares of DBV Technologies (DBVT 2.27%) were jumping 8.9% as of 12:06 p.m. EDT on Monday after rising as much as 11.9% earlier in the day. The solid gain followed the company's announcement that it will present new clinical study results for experimental peanut allergy drug Viaskin Peanut (DBV712) at the 250-microgram dose in children at the American College of Allergy, Asthma & Immunology (ACAII) Annual Scientific Meeting scheduled for Nov. 4 through Nov. 8.

Investors appear to be anticipating that DBV will provide good news at the ACAII meeting that starts later this week. They're likely basing their optimism on comments from DBV Technologies chief medical officer Pharis Mohideen. In the press release announcing the ACAII presentation, Mohideen said, "These data presented at ACAII contribute to our understanding of and excitement for the potential real-world use of Viaskin Peanut, if approved." 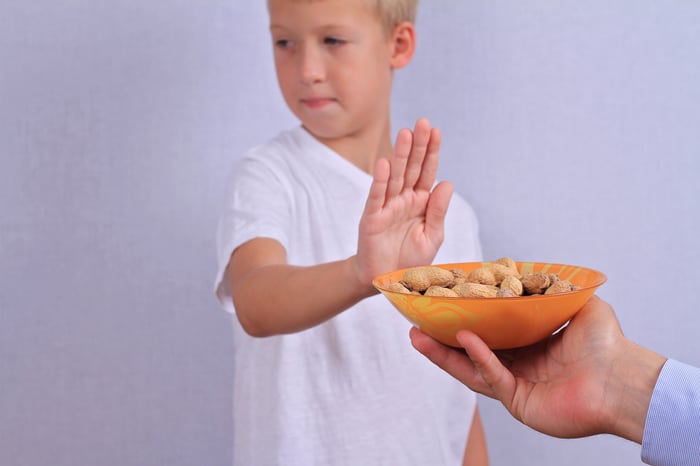 However, today's spike for the biotech stock doesn't erase the huge decline from last week. DBV provided its third-quarter update on Oct. 26. The company stated that the U.S. Food and Drug Administration (FDA) wants to review data from its protein uptake release study before giving additional feedback on the protocol design for the Stamp study of Viaskin Peanut.

The company also said that it's preparing responses to the Day 180 letter from the European Medicines Agency (EMA) that included objections to approval for Viaskin Peanut. DBV indicated it is having ongoing conversations with the EMA about the specific objections.

It's only a matter of days before DBV's new data is presented. However, there's still uncertainty about how long it will take for the FDA to provide additional comments on the protocol design for the Stamp study. DBV won't begin the study until it receives full feedback from the agency.

The EMA decision is also up in the air. However, if DBV satisfactorily addresses the European agency's objections, Viaskin Peanut could potentially win marketing authorization as early as the first quarter of 2022.