It's not as crazy as it sounds.

Netflix (NFLX -1.96%) has been a disruptive force throughout its history.

First, the company upended the video-store model with its DVD-by-mail service. Then, it reinvented home entertainment once again by pioneering video streaming, and now it's remaking Hollywood in its image by spending billions on movies and television shows each year.

It's hard to understate the speed and success that the company has had in its insurgence on the entertainment business. Five years ago, it had not even released an original production. This year, it won more Emmy awards than any other network after Time Warner's HBO. Those efforts have clearly paid off on the business side as the stock is at an all-time high, up about 60% this year, and the service has added 22.5 million subscribers over the last year. It's growing faster than ever.

Netflix is spending more on content than any of its competitors and is set to pour $7 billion to $8 billion into new movies and TV shows next year. It says it will release 80 movies next year, much more than any rival studio. The company is on track to finish the year with 54 million domestic subscribers, and it could hit 60 million as soon as next year, the bottom end of the range of its forecasted ceiling on U.S. membership.

As the company reaches maturity in the U.S., investors and the company itself will wonder how it can continue growing at home, as it can only raise prices so often. Movie theaters present a natural option. 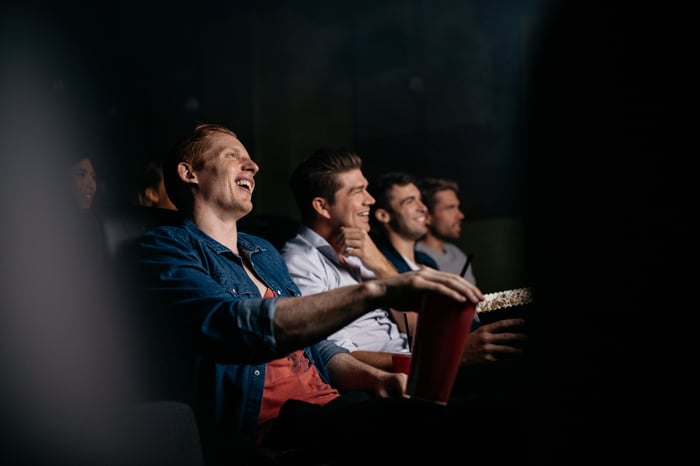 An industry ripe for disruption

The movie theater business is stale. It's seen little innovation over the past generation as efforts like 3D technology have fallen flat, while home entertainment has advanced several times over with premium networks like HBO, VHS tapes, DVDs, and now streaming, making thousands of titles accessible at the push of a button.

Meanwhile, Americans have grown jaded with overpriced concessions and tickets and a lack of originality at theaters with so many comic book-themed sequels.

Movie theater stocks have struggled lately, too, with Regal Entertainment (NYSE: RGC), AMC Entertainment (AMC -0.73%), and Cinemark Holdings (CNK 0.80%) having all fallen this year. Further, ticket sales have essentially been flat for 20 years as theaters have relied on price increases to grow revenues. Box office attendance peaked in 2002 at 1.575 billion even though the population has steadily increased since then.

Not only is there a clear opportunity for Netflix to disrupt theaters, but it's becoming increasingly apparent that it would make business sense for Netflix to do so as well. The company has feuded with theater chains repeatedly, who refuse to show Netflix originals without the streamer respecting the traditional windowing process, whereby theaters have exclusive rights to a film for a number of weeks before it's available at home.

Netflix needs its movies to be shown in theaters in order to qualify for the Oscars, and owning its own screens would eliminate the hassle of dealing with companies that see it as competition.

But more importantly, the massive movie releases Netflix has planned could be getting bottled up in the streaming pipes. Its plans for 80 new movies next year compare to 106 films released last year by the six biggest studios -- Disney (DIS -1.31%), Warner Bros., Twenty-First Century Fox (FOXA) Comcast-owned Universal (CMCSA -0.23%), Sony (SONY -1.97%), and Paramount, owned by Viacom (NASDAQ: VIA). It's an eye-popping number for Netflix.

Those studios rely on box office sales to recoup costs, while Netflix is serving its movies up in a smorgasbord to its subscribers without the benefit of box office receipts. With such a model, it seems to hard to justify spending $90 million on a movie like "Bright," the upcoming Will Smith vehicle from Netflix. Entertainment lawyer Chris Spicer told Marketwatch, "I mean $90 million for a film that's not going to be released in theaters seems crazy."

Netflix also seems to be leaning on the types of content that are more suitable for theaters with its partnership with Disney to make Marvel-themed series and its recent acquisition of Millarworld, the comic-book publishing house that owns Kick-Ass and Kingsman. Comic-themed action movies have become so common in theaters in part because they suit the experience so well, with surround sound and big screens.

There are precedents for such vertical integration. Apple was doubted when it first opened its own retail stores, but today those stores generate more sales per square foot than any other company. Amazon has gradually moved into brick-and-mortar retail over the years, making a full-on dive with its recent acquisition of Whole Foods. Early reports show that traffic spiked at the grocer following the takeover.

Netflix could make such theaters a destination by opening just a handful in major cities across the country. With 80 movies of its own to screen, it wouldn't lack for material, and it could make sure they all get the attention they deserve. It would also have complete control over the experience, which it doesn't now when its movies screen in limited releases. The company could even follow Amazon's example with its own retail stores and offer discounts for subscribers.

And it could pick up some theater screens on the cheap. AMC now has about 8,200 screens nationwide but a market cap of just $1.82 billion, meaning its screens are valued at a little more than $200,000 each.

CEO Reed Hastings rejected the theater idea in a conference this spring, saying the company had "no plans" to launch such a chain and argued that the TVs were getting so good that it made little sense to do so.

However, he also said that movie theaters would persist because they offer a different experience than watching at home. Indeed, even as it gets easier to stay at home with the rise of e-commerce and other such conveniences, people will still want to go out. Movies are one of the few outings that appeals to all ages, demographics, and lifestyles, and theaters often a certain magic that doesn't happen being home in front of a TV.

Netflix has always been disciplined about its business, resisting calls to get into sports or video game rentals during its DVD era. But as the business matures at home and the company asserts its dominance over Hollywood, taking the next step into theaters seems like a logical move.