Investors could be forgiven for shying away from the stocks of small biotechs. Not only is the complex technology behind their products almost impossible for most of us to understand, the majority of these companies don't even make profits. What they usually do is plod through lengthy and uncertain drug trials while consuming huge amounts of cash.

Fortunately, there are a few small biotechs that are not only growing sales rapidly, but making a profit along the way. Three that match this description -- though with very different business models -- are Corcept Therapeutics (NASDAQ:CORT), ANI Pharmaceuticals (NASDAQ:ANIP), and Ligand Pharmaceuticals (NASDAQ:LGND). But what they have in common beyond that is that each has attributes that lessens its risk for investors, compared with most similarly sized biotechs.

Making the most of a valuable niche

Corcept Therapeutics is a drug discovery, development, and commercialization company that focuses on a single pharmacological mechanism: blocking the effects of the stress hormone cortisol. When the body overproduces cortisol, it creates a rare but serious condition known as hypercortisolism, or Cushing's Syndrome. Corcept's earnings today come from one Cushing's treatment -- Korlym -- but the company believes the future generations of the drug could have many other uses. 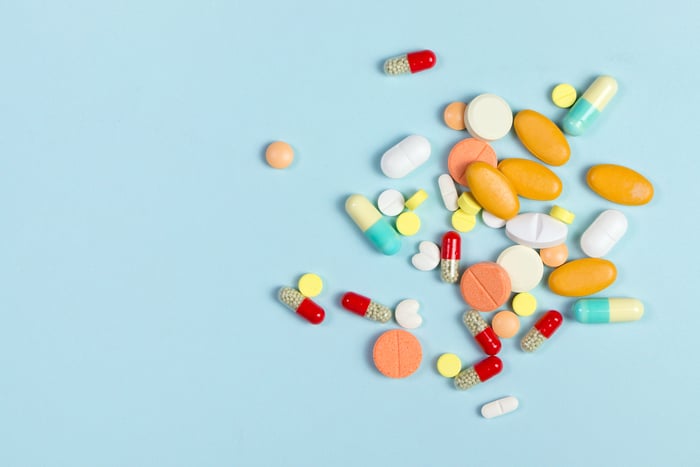 Corcept has been selling Korlym since 2012, but sales are accelerating as doctors have become more familiar with the drug's efficacy, and as screening processes have improved, allowing them to diagnose patients with milder forms of hypercortisolism. The company's 81% revenue growth in the most recent quarter beat analysts' expectations, and it raised guidance for the year.

Corcept is conducting phase 2 trials of an improved version of Korlym that does not have the drawback of affinity for progesterone receptors. If successful, it will expand the number of Cushing's patients who can take the drug. But the company believes that the modulation of cortisol has many other clinical uses, and its drug discovery program is aimed at these opportunities.

For example, chronically high levels of the stress hormone degrade the immune system, so Corcept believes that blocking the effects of cortisol will enhance the effectiveness of newer cancer therapies designed to marshal the body's immune system to destroy tumors. Since excess stress plays a negative role in many disease processes, its library of 300 related compounds may be useful in treating a wide variety of conditions, such as diabetes, obesity, hypertension, Alzheimer's disease, post-traumatic stress disorder, and alcoholism.

Corcept has a pristine balance sheet. It generated over $18 million in free cash flow last year, which it used to pay off all its remaining debt, and has $68 million in cash. The company believes those reserves, plus the cash generation from Korlym, will be adequate to fund phase 2 and 3 trials of its next-generation drug for Cushing's and for solid tumor cancers, phase 1 and 2 trials of a drug candidate for castration-resistant prostrate cancer, and phase 1 trials of a compound that is particularly potent in the liver and which has the potential to treat antipsychotic-drug-induced weight gain and fatty liver disease.

Corcept Therapeutics has been one of the best-performing biotech stocks of the year, but at a recent price of about $18, it sells for a not-outrageous 28 times analyst estimates for next year's earnings compared with a forward P/E of 19 for the S&P 500. The stock has risk because the company is placing all of its bets on a single physiological mechanism, and its drug's potential in diseases beyond Cushing's is far from proven. But the growing profits from Korlym and the resulting financial strength of the company mitigate that risk considerably.

ANI Pharmaceuticals' business model takes most of the risks and uncertainties out of developing new, cutting-edge drugs. It specializes in difficult drug-manufacturing processes that it uses for its large portfolio of acquired and developed drugs, or contracts out to other drugmakers that don't want to invest in those capabilities. ANI's strategy is to focus on drugs that have limited competition, or where there's a high barrier to entry keeping new companies out of the market.

ANI currently manufactures and sells 30 different drugs, which generated $44.8 million in revenue last quarter, up 43% from the year before. Generic drugs, mostly acquired from the likes of Teva Pharmaceuticals, accounted for 70% of revenue, while branded products contributed 26%; the remainder came from contract manufacturing. ANI typically acquires drugs for some upfront payment and a small royalty on sales. 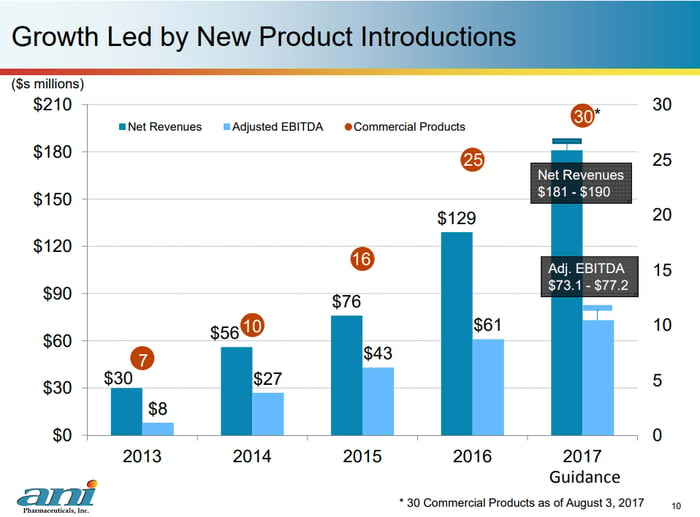 ANI also has a pipeline of drugs in development. Most of these are compounds were drugs that were already approved, but were discontinued by other companies, and which ANI is recommercializing through additional filings with the FDA. That pipeline consists of 71 generic drugs that the company says have an addressable market of $2.1 billion, and five branded drugs with a total addressable market of $1.6 billion.

The company is growing fast: Revenue for the first six months of 2017 was 57% higher year over year. But that growth comes at a price. ANI is investing heavily in acquiring drugs, and now carries $154 million in debt against $8 million in cash on the balance sheet.

With a broadly diverse portfolio and pipeline, the company is not subject to much risk associated with individual drugs, but the capital needs of the business will require ANI to issue more shares or go deeper into debt if it's going to keep expand at its recent pace. On the other hand, with shares trading at around $59, this little-known biotech sells at a below-market multiple of about 13 times estimated 2018 earnings, which makes it the cheapest of these three companies.

Ligand Pharmaceuticals focuses on developing and acquiring technologies that help other companies develop new drugs. After Ligand works with a partner to create a new compound, it gets royalty payments as that partner achieves milestones in the testing, manufacture and sale of it. This business model allows Ligand to operate with a lean cost structure and low capital requirements.

Ligand has 160 programs in various stages of commercialization underway with 100 partners, and is collecting royalties on 17 approved drugs for a broad range of diseases including cancer, osteoporosis, fungal infections, and low blood platelets. Its development pipeline includes candidate treatments for seizures, coma, cancer, diabetes, cardiovascular disease, muscle wasting, liver disease, and kidney disease, among others. Examples of its technology platforms include Captisol, which solves solubility and stability problems for drugs, and OmniAb, an antibody discovery platform.

An attractive feature of Ligand's business model is that royalty income has a gross margin of essentially 100%: With its high operating leverage, new royalty streams drop straight to the bottom line. Even better, most of its contracts have clauses that increase royalty percentages as sales volumes of the underlying drugs go up, creating an accelerating effect. In recent years, not only have the sales of partnered drugs accelerated, but the average royalty percentage on those sales has increased. 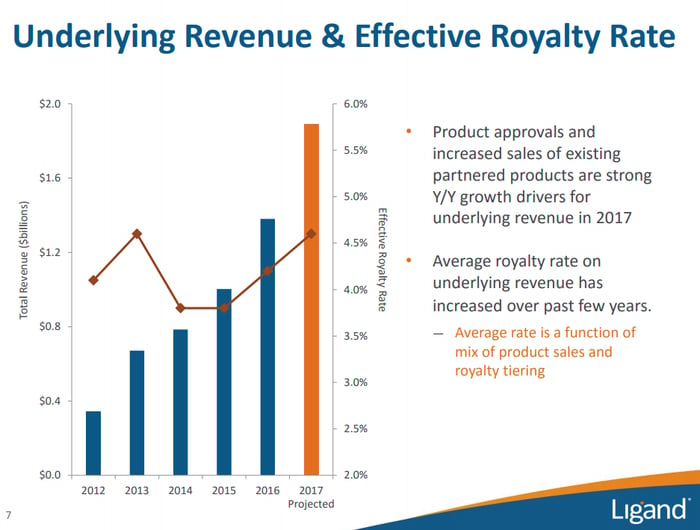 Shipments of partnered drugs are soaring while the royalty rate on those shipments is also increasing. Image source: Ligand Pharmaceuticals.

Since Ligand only helps with drug discovery and development in the very early stages, partners bear the lion's share of development costs along with the risks associated with drug trials and approvals. Its cost structure gives it tremendous financial strength, so there's no need for additional capital raises. As one might expect, this relatively low-risk biotech stock is the most expensive of the three; at a recent price of $144, shares go for 37 times analyst estimates of 2018 earnings.