Please ensure Javascript is enabled for purposes of website accessibility
Log In Help Join The Motley Fool
Free Article Join Over 1 Million Premium Members And Get More In-Depth Stock Guidance and Research
By Timothy Green, Dan Caplinger, and Travis Hoium - Oct 24, 2017 at 7:20AM

No one knows when this bull market will end. You need to be prepared regardless of the timing.

The stock market has been powering higher, with a few corrections scattered here and there, for the better part of a decade. Since bottoming out in early 2009, the S&P 500 index has gained nearly 270%, an epic run that has fattened brokerage accounts, 401(k)s, and IRAs of those invested in this bull market.

All bull markets eventually come to an end, and this one is no exception. Exactly when this end will come is unknown -- and unknowable -- but investors can be sure that stocks can't simply go up forever. What should you do with your money in an aging bull market? Three of our Foolish investors think investing in ExxonMobil (XOM -0.85%), Bed Bath & Beyond (BBBY -9.26%), and Las Vegas Sands (LVS 0.00%) are good options. 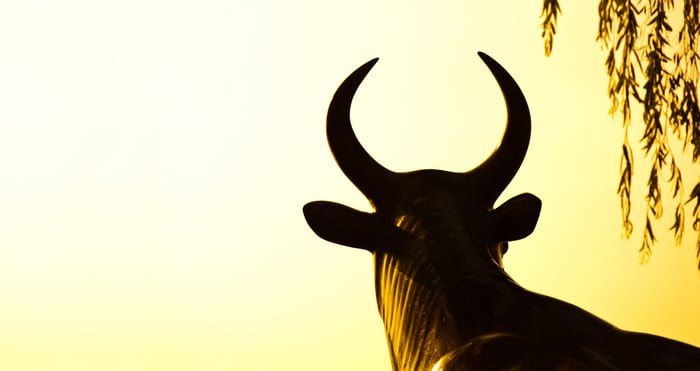 Pump this stock for profits

Dan Caplinger (ExxonMobil): The bull market in stocks has gone on for more than eight years now, and defensively minded investors want companies that can stand up to the next downturn in the market. ExxonMobil has shown in recent years that its share-price trajectory doesn't necessarily match up with that of the overall stock market, and the oil giant is working hard to take maximum advantage of tough conditions in the energy market to shore up its business and find new opportunities for growth.

ExxonMobil has a long track record of rewarding its shareholders with growing dividends, as annual increases have happened for 35 years in a row. Yet despite its mature business, ExxonMobil still has tricks up its sleeve to stay ahead of the pack. For instance, over the past couple of years, a surprise find off the coast of South America turned out to be far more lucrative than expected, and that exploration effort has continued to pay off for the energy giant, with more recent discoveries that have expanded the scope of reserves there.

A lot depends on what brings down the bull market, but ExxonMobil has the benefit of being more tied to oil prices than to the stock market at large. Indeed, if rising oil prices themselves cause the next recession, then it's entirely possible that ExxonMobil stock could gain ground, even as more consumer-driven companies suffer.

Tim Green (Bed Bath & Beyond): With the market punching out new all-time highs nearly every day, many stocks are trading at optimistic valuations. This bull market may continue for some time, and those valuations may get even more optimistic. But paying escalating prices to avoid missing out on potential gains is a dangerous course of action.

One reasonable strategy for this aging bull market: Buy a stock that already has overwhelming pessimism baked into the price. Bed Bath & Beyond, a struggling home goods retailer, is a great example. The company's profits have been contracting for years, as online retailers scoop up market share, and comparable sales have started to decline at a worrying rate. But with the stock trading for just seven times the average analyst estimate for fiscal 2018 earnings, there's a lot of upside if the company performs better than the market is expecting.

Investing in Bed Bath & Beyond comes with plenty of risk, too. The company has shown no sign that a turnaround in sales or profits will take place any time soon, and a recently announced realignment of store management could be a precursor to store closings. But if you don't want to pay dozens of times earnings for stocks that have soared over the past few years, a risky but potentially lucrative turnaround play like Bed Bath & Beyond could be the way to go.

Travis Hoium (Las Vegas Sands): We're in the ninth year of a bull market, and investors looking for value in this aging bull market may have to look well beyond blue chip and well-known stocks. One company that I think is well set up for such a market -- and any potential pullback -- is Las Vegas Sands, the gaming company that dominates the Asia market.

Las Vegas Sands has spent most of the last decade building out a massive fleet of casinos in Macau and Singapore, where it has highly coveted gaming licenses. In Macau, the company has five major resorts, and four on the booming Cotai Strip. In Singapore, it has one of two casinos in the country. The result has been the tremendous growth in revenue and adjusted EBITDA, a measure of cash flow, that you see below. 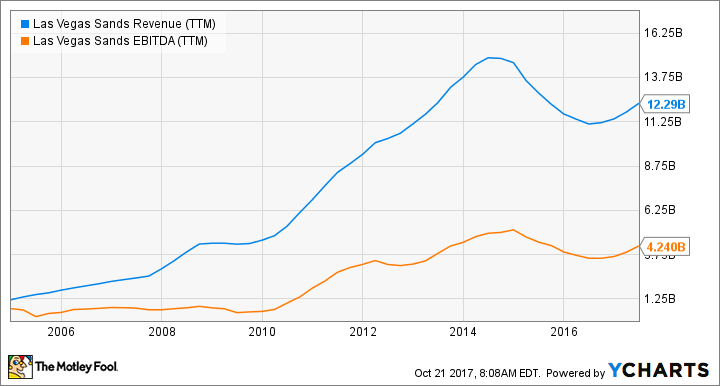 What investors should like about Las Vegas Sands in 2017 isn't its potential for growth, as it is long past its expansion phase. Instead, they should like the cash flow consistently coming into the company and the relatively low debt load of $7.8 billion. Even as this bull market ages, Las Vegas Sands will continue to churn out cash to pay dividends or pay down debt. And if the bull market ends, it has an enviable position as Asia's biggest gaming company to fall back on. That's a great position for investors to be in.