A lot of the investment thesis for Cleveland-Cliffs (NYSE:CLF) over the past several years rested in management's ability to pull off a daring turnaround plan. Based on the company's most recent results, it looks as though it has executed on its plan rather well. Now, with a new focus, Cleveland-Cliffs is looking to grow the business without falling into the traps the former management team did.

On the company's most recent conference call, management highlighted some of its most recent achievements, what's going on in the global iron ore market that's influencing its decisions, and what it plans to do in the coming years. Here are a few quotes from the most recent call that investors should note. 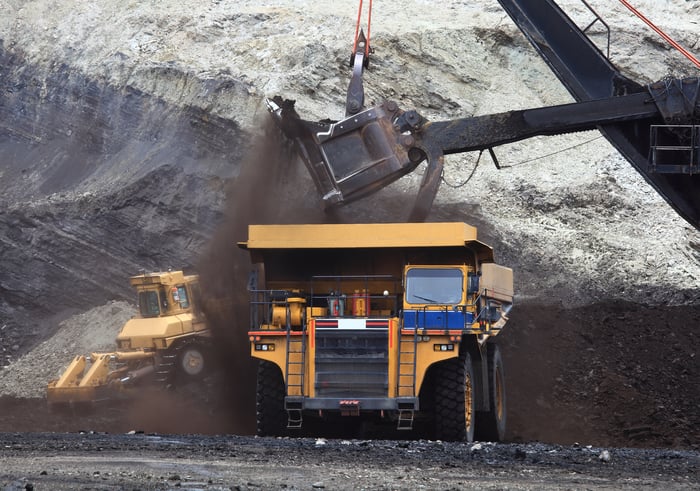 Ever since the current management team took the reins a few years ago, there have been two primary goals: Get rid of unprofitable business segments, and lower the debt burden. Cliffs already achieved the first goal, and in the past few quarters, the management team has worked with cash from operations and opportunistic market timing to pay off or refinance debts.

This past quarter, the company made another big financial move. It didn't really lower its overall debt load, but it did achieve some other notable goals that Chief Financial Officer Tim Flannery noted on the call:

[L]ess than 9 months ago, we had three layers of high coupon secured debt and a maturity tower of nearly $1.7 billion looming in 2020. Post this most recent transaction and in less than a year, we have reduced that 2020 maturity power by almost $1.5 billion. It now sits at just about $200 million with all of the previous tower being retired outright or pushed out 5 years into lower interest notes. In addition, we have vastly simplified our capital structure, leaving us with much more financial flexibility to navigate the always cyclical commodity environment. And of course, our annualized interest expense which at one point hovered around $230 million has been reduced to just $96 million per year.

One of the things that made Cleveland-Cliffs' debt level so scary a few years ago was that it was shelling out so much in interest payments. Now that its interest burden has been cut in half and the company's net debt to EBITDA is around 2.7, the company is on a stable foundation that should lead to much better results in the coming quarters.

With this in mind, management did the next best thing: It brought out the equity partner for its Tilden mine. Here's CEO Lourenco Goncalves explaining the rationale for the deal:

As expanding our pellet production capacity became a priority with the need to supply our new HBI facility in Ohio, we looked at the possibility of organically growing within our current portfolio. After rigorous study, it became clear that organic growth would be a more expensive alternative. We therefore opted to add the tons from a mine and pellet plant fully operational and very well-managed by ourselves in a risk-free transaction. The newly acquired production capacity gives us the flexibility to meet not only the pellet needs of our blast furnace customers, but also the DR grade pellets needs of our own HBI [hot-briquetted iron] facility coming online in 2020. Starting in 2018, we will have our annual capacity in the United States increased to 20 million long tons of pellets.

With iron ore prices in the dumps and the company's better financial position, this was an opportune time to strike. Cleveland-Cliffs acquired the remaining stake in Tilden for $105 million from United States Steel.

Is the tide turning in China?

For the past couple of decades, China has been the 800-pound gorilla in the room when it comes to the iron ore market. At first, it was the country's seemingly insatiable appetite for steel and a rapid expansion of its steel manufacturing capacity. Then, when China's growth tapered off, all that production capacity became excess supply. For the past several years, all that excess capacity was still running and flooding the global markets with cheap steel, and it wreaked havoc on iron ore miners and domestic steel producers. 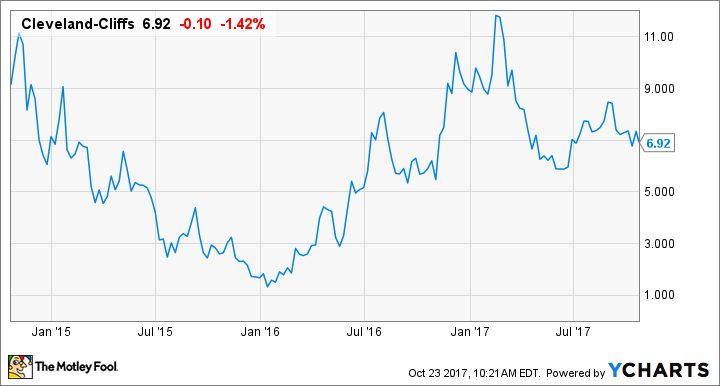 It appears, though, that China is starting to chart a new course. Here's Goncalves explaining what he's seeing in the market and what it could mean for Cliffs' results in the near term:

[A]s we transition to 2018, imported steel should no longer be as much of a problem in the U.S. domestic market, largely due to the measures recently implemented by the Chinese government, which significantly restrict their own steel output. With domestic steel consumption in China pretty much unabated and production restrictions in place, it is not reasonable to expect that the Chinese will continue to be able to flood the international market with cheap steel.

Those steel restrictions have a lot to do with reducing pollution in several major cities across the country. While Goncalves said he doesn't expect China to implement all of the announced cuts -- some cities have targeted 50% capacity cuts -- any sizable cuts should be welcome at this point.

New project getting a lot of good vibes

Last quarter, Cleveland-Cliffs announced its first major expansion project in a long time: an HBI plant in Toledo, Ohio, that will supply electric arc furnaces with the raw products that meet their specifications. The economics of the project certainly make sense, and according to Goncalves, the overall reaction from its customers has been better than expected:

[W]e have made a great deal of progress on HBI. We have lined up commitments from numerous third-party providers and begun staffing a team of some of our most talented internal employees along with more expertise from the outside. ... As for demand, we are excited with the amount of inquiries and demonstrations of interest we have received from potential customers. As we fully anticipated, current users of imported pig iron and HBI are excited to be able to switch to Cleveland-Cliffs as their domestic source of high-quality iron units that are custom-made and much closer geographically.

On top of the customer demand to replace pig iron imports with Cliffs' HBI product, Goncalves also noted that potential equity partners have made several inquiries. Management has said that it is more likely than not that it will take on an equity partner, but there haven't been any formal announcements yet, and the company is ready to shoulder the initial capital spending without a partner in place, if need be.

Cleveland-Cliffs looks like an almost completely different company from a few years ago. It has a decent balance sheet and some catalysts that could send the stock higher, and that catalyst isn't simply higher iron ore prices. Its Asia-Pacific business continues to be a drag on returns, but management has said it plans to sunset that operation when it stops generating cash.

It seems appropriate that the company has changed its name back to Cleveland-Cliffs, because it was barely recognizable from its former self. Investors should probably take a fresh look at this company as well, because the future looks quite good.