Another day, another report of iPhone X production challenges. The latest comes from The Nikkei Asian Review, which says that Apple (AAPL 1.62%) may only ship 20 million iPhone X units in 2017. That represents just half of the original unit volumes that Apple was planning for the year, according to the report. The Nikkei also notes that the OLED panels initially had a problem with the bonding process, which was resolved in July (in line with other reports). iPhone X is the first iPhone to fully adopt OLED display technology.

Apple's new TrueDepth camera system is again being pegged as a major bottleneck, with manufacturers only improving yields on that module in late September. The current production rate is now around 10 million units per month, and with sales kicking off on Nov. 3, Apple might only ship around 20 million units because production up until now has been paltry. The first batch of iPhone X units to leave Foxconn's factories earlier this month was reportedly just 46,500 units, and KGI Securities analyst Ming-Chi Kuo only expects 3 million to be available for launch.

Investors should brace for an earnings miss and soft guidance

If Apple only ships 20 million iPhone X units in the fourth quarter, those production challenges could wreak havoc on Apple's results for the all-important holiday shopping season. To put 20 million units into context, here's how it would compare to how many total iPhone units Apple has shipped in the fourth quarter of prior years. 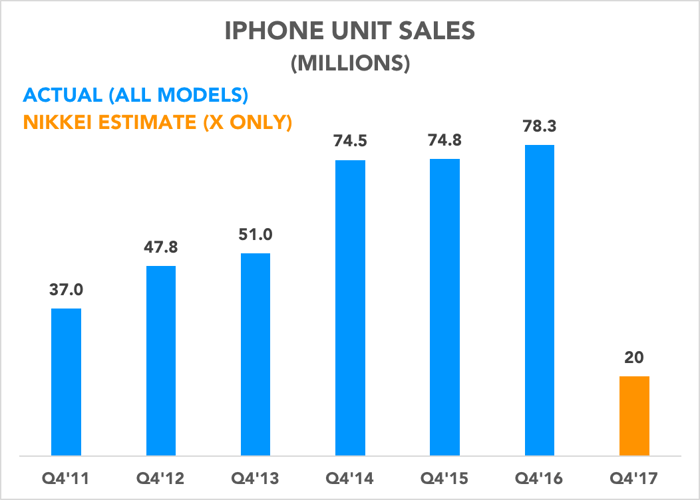 Note that historical figures include sales of all iPhone models, while the Nikkei estimate only applies to iPhone X. Apple doesn't directly disclose product mix, but average selling prices (ASPs) reliably spike during launch quarters as consumers flock to the newest (and most expensive) models each year. There is no shortage of reports that the iPhone 8 and 8 Plus are selling poorly, both because the external design is not aging well and most customers are anxiously awaiting the iPhone X.

The iPhone always represents a disproportionate percentage of sales, but even more so during the fourth quarter. The handset absolutely carries results in the fourth quarter: iPhone comprised 69% of total revenue in Q4 2016. If the flagship product in the most important quarter is plagued with significant supply constraints due to production challenges, that doesn't bode well for the company's financial results.

I still believe investors should be expecting an earnings miss for the September quarter, since the timeline suggests that Apple's rosy guidance was issued before it knew of delays for the TrueDepth camera's dot projector production. Furthermore, if Apple does indeed miss on the September quarter and proceeds to issue extremely soft guidance for the December quarter, the dire combination could take a big bite out of shares.

It's true that the challenges are short-term in nature, and most of those sales are just delayed instead of lost, but investor pessimism could create a short-term overhang while the production issues persist. Investors will get more clarity when Apple issues guidance alongside earnings on Nov. 2.