As expected, General Motors (NYSE:GM) swung to a GAAP loss of about $3 billion in the third quarter, and its revenue fell sharply from a year ago, on a year-over-year drop in production and $5.4 billion in one-time charges related to the sale of its German subsidiary Adam Opel AG to French automaker Peugeot SA.

Beyond those issues, GM's underlying performance was fairly strong. All of its regional business units were profitable, and it outperformed Wall Street's expectations.

When adjusted to exclude the effects of one-time items and Opel's results, GM earned $1.32 per share in the third quarter, well ahead of the consensus $1.13 Wall Street estimate as reported by Thomson Reuters. Revenue of $33.6 billion also beat Wall Street's $32.67 billion estimate. 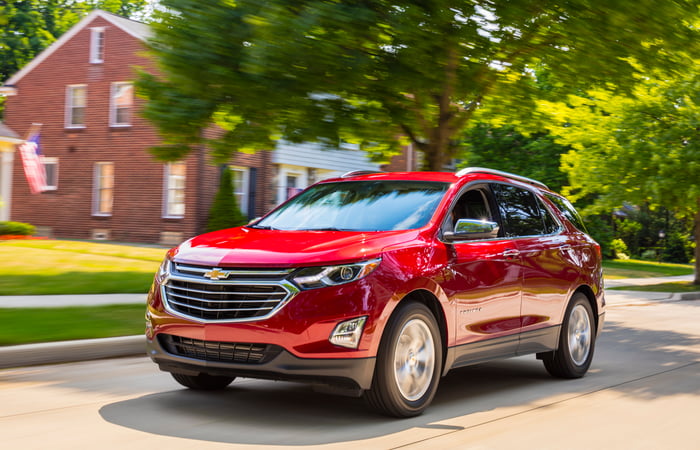 GM's third-quarter results are complicated by the sale of Opel, which closed on August 1. The sale's closing triggered a series of one-time charges totaling $5.4 billion.

To help investors make sense of the situation around the Opel sale, GM is reporting its financial results two different ways for the time being: on a "continuing operations" basis, which excludes Opel, and a "consolidated" basis, which doesn't.

Analysts and most investors will focus closely on the continuing-operations numbers, which show how GM-minus-Opel is performing. On that basis, GM was profitable in the third quarter, though just barely: Its net income was $115 million, down almost 96% from a year ago.

Here are GM's key numbers for the third quarter, as presented on a continuing-operations basis:

Data source: General Motors. "Adjusted" numbers exclude the effects of one-time items. 2016 numbers are presented on a 2017 continuing-operations basis, excluding results from GM's now-sold Opel subsidiary. See below for an explanation of "EBIT-adjusted."

The numbers that analysts, investors, and GM's management watch most closely are what GM calls "EBIT-adjusted," which is essentially operating income minus one-time items, and its EBIT-adjusted margin, which is EBIT-adjusted as a percentage of revenue.

Here's a look at how each of GM's four principal business units performed. All profit numbers in this section are presented on an EBIT-adjusted, continuing-operations basis.

About those Opel-related special items

As noted above, GM took a total of $5.4 billion in one-time charges related to the Opel sale. The total charges were a bit lower than the company's forecast of $5.5 billion to $6 billion. 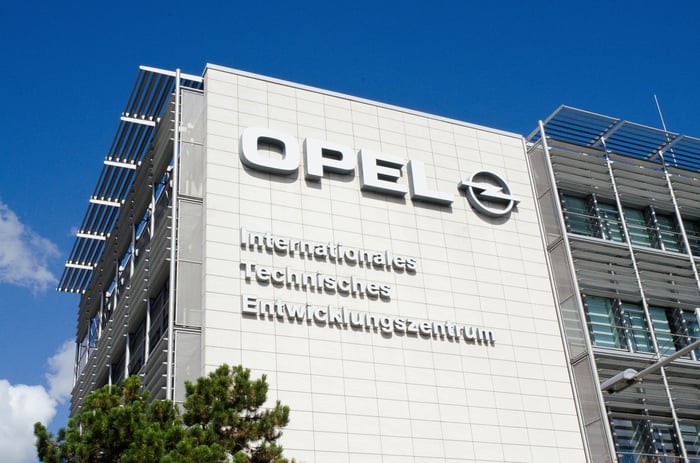 The sale of German automaker Opel to Peugeot had a big impact on GM's third-quarter results. Image source: General Motors.

The charges include a $4.3 billion charge for deferred tax assets that GM can no longer realize. Essentially, GM has tax credits related to its heavy losses years ago that it hasn't taken. Because of the sale of Opel, it now can't ever take the portion of those tax credits related to Opel's losses at the time. But the thing to remember is that this is an accounting charge; it didn't burn any of GM's cash.

The remainder of the special item is related to pensions, and some of it did involve cash: It includes premiums that GM agreed to pay to Peugeot in exchange for Peugeot's agreement to assume some of Opel's pension liabilities.

On a continuing-operations basis, GM's "adjusted automotive free cash flow" (free cash flow related to its core auto-making business, minus special items) was negative $1 billion, down by $5.1 billion year-over-year, on lower net income, the timing of certain expenditures, and production lost from a strike at a GM factory in Canada.

Through the first 3 quarters of 2017, GM's adjusted automotive free cash flow is just $1 billion on a continuing-operations basis, down from $5.7 billion in the same period in 2016. Having now absorbed the financial hit of the Opel sale, GM expects its cash flow to normalize in the fourth quarter, and to report about $6 billion in positive adjusted automotive free cash flow from continuing operations for the full year.

GM's overall guidance is unchanged: It still expects its full-year 2017 financial results, on a continuing-operations basis, to be "generally in-line with the record results delivered in 2016." Specifically, GM now expects that its adjusted earnings per share for the full year will be roughly in the middle of its previously forecast range of $6 to $6.50. GM earned $6.12 on that basis in 2016.

GM also noted that it expects to return about $7 billion to shareholders in 2017, via dividends and its ongoing share-repurchase program.