But should investors expect a trick or a treat out of this stock?

Party City Holdco Inc. (PRTY -4.35%) stock debuted to great fanfare on the NYSE two years ago, going public at $17 a share, but quickly climbing 20% to close at $20.70 the next day. It's been mostly downhill from there.

Over the past two years, Party City has shed nearly half its value, closing yesterday at $11.20 per share. But now, analysts at BMO Capital Markets are trying to get the party started again, announcing a big upgrade to outperform and a new price target of $16 (43% upside to the stock). 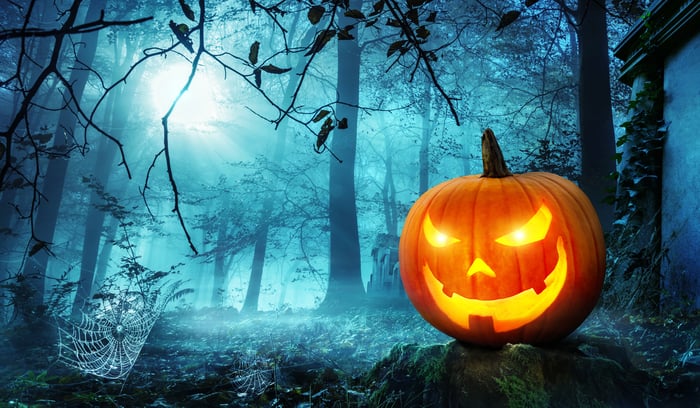 An upgrade for Party City

StreetInsider.com (requires subscription) covered the details of today's upgrade, noting that Party City stock has shed 34% of its value over the past 12 months, creating "a favorable risk/reward entry point." BMO further observes that its "channel checks" of Party City's business look "strong," with little indication that Party City is discounting its wares (as one would expect it to do if sales were weak) this year.

Assuming sales are strong, EMO believes that a target price of $16 is "possible," and that the stock could even regain its 52-week high of $17.

Why would sales be weak?

Much has been written in recent months concerning the effect of Amazon.com's (NASDAQ: AMZN) sales growth on the businesses of competing brick-and-mortar retailers. Now, predicting strong sales from Party City in such an environment seems like asking for trouble. However, a new survey conducted by phone-charging company ChargeItSpot (which surveyed 500 customers visiting its charging kiosks nationwide) suggests the situation may be different for themed retailers such as Party City.

Earlier this year, the National Retail Federation published a report estimating that shoppers will spend $9.1 billion on Halloween supplies this year -- up 8% from the $8.4 billion spent in 2016. And where will they be spending those dollars?

ChargeItSpot's just-released "Halloween Shopping Report" finds that 71% of shoppers surveyed prefer to do their Halloween shopping in brick-and-mortar stores rather than online. This may be because of the last-minute, panicked buying that comes about when realizing that trick-or-treaters will soon be at the door. It may be because little Johnny and Suzie have suddenly decided they no longer want to dress up at Frozen characters, and are in the mood to be Marvel superheroes this year. Whatever the reason, ChargeItSpot says that the majority of these dollars will be spent on candy (which Party City sells), and about 48% of dollars spent will go to buying costumes, decorations, and party supplies -- which Party City specializes in selling.

Does this, however, mean you should rush right out and invest in Party City stock before the holiday arrives, as BMO advises? Not necessarily.

I admit that on the surface Party City stock looks attractive. With nearly $116 million in trailing net profits, and a stock price that's deeply in the dumps post-IPO, Party City stock currently sells for a seemingly cheap 11.6 times trailing earnings. But here's the thing: that valuation does not take into account Party City's heavy $1.7 billion debt load, imposed upon the company by private equity firm Thomas H. Lee Partners when the company went public two years ago.

Thanks to that debt, Party City's enterprise value is more than twice the company's market capitalization. At an enterprise value of more than $3 billion, this business is valued at nearly 26 times trailing earnings. Yet according to data provided by S&P Global Market Intelligence, even the most optimistic analysts don't expect to see Party City grow its earnings much faster than 12% annually over the next five years, and the average analyst thinks 11% growth is actually more likely.

At an enterprise value-to-earnings ratio of more than 2.0, I fear investors who follow BMO's advice and buy Party City stock may be in for more of a trick than a treat this Halloween.