Kraft Heinz (NASDAQ:KHC) will report its third-quarter earnings on Wednesday, Nov. 1, after the market close. The stock is down 12% year to date following soft sales performance to start the year. Consumers are buying more fresh foods and less packaged foods, which has hurt demand for Kraft Heinz's products.

Will management's initiatives be enough to reignite sales growth? The earnings report will let us know how things are going. Here's what investors need to watch. 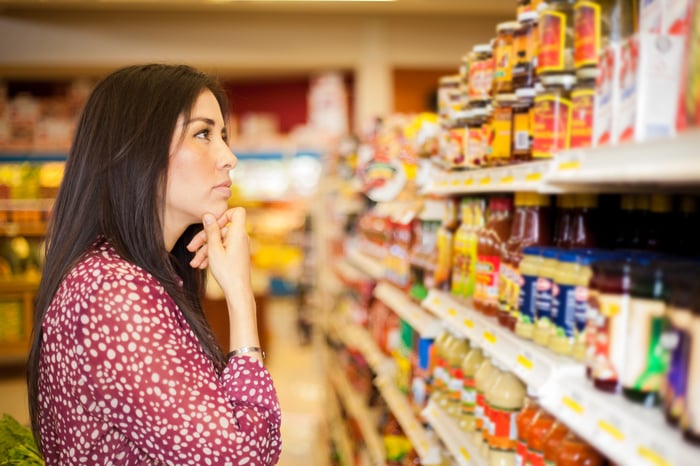 Kraft Heinz doesn't give quarterly guidance, but analysts' average estimate is that the food giant will report $0.82 in earnings per share, one penny less than last year's third quarter. For the full year, analysts predict the company will grow earnings 9% over Kraft Heinz's 2016 adjusted earnings per share of $3.33. While management doesn't give specific numbers to investors, they have said they expect "solid" earnings growth for 2017. However, increased investments in marketing, distribution, and new products will likely hold down margins for 2017 versus 2016.

Earnings growth will come from cost-cutting, as Kraft Heinz has struggled to find meaningful growth on the top line. Since new management took over in 2015, the company has cut $1.45 billion in cumulative costs through the second quarter. This aggressive cost-cutting boosted earnings growth by 52% in 2016. Management is targeting another $250 million in cost savings by the end of the year.

Sales growth is what investors should really pay attention to going forward. Organic net sales grew 1.6% in 2016, but declined 1.8% year over year in the first half of 2017. The food industry has seen very weak sales performance lately, and Kraft Heinz is no exception. Consumers are shifting from heavily processed packaged foods to fresher foods. Kraft Heinz was hit hard with lower demand in the first quarter, but saw improvement in the second quarter.

The good news is that Kraft Heinz's market share was stable during the first half of the year despite the decline in sales, which means the problems facing the maker of Oscar Mayer hot dogs and many other brands is an industrywide problem, and not anything Kraft is doing wrong.

Although the first half of the year was disappointing from a sales perspective, management is not concerned because most of their growth investments are weighted to the second half of the year, where they expect further improvement across the business to drive top-line growth to finish the year.

Outside the U.S., efforts include investments in distribution in South America and Mexico. As for the U.S., management expects sales growth to accelerate in the second half of 2017, stemming from better in-store execution and the introduction of new products to capture opportunities across different food categories.

Keep in mind, Kraft Heinz is majority owned by 3G Capital and Warren Buffett's Berkshire Hathaway -- two shareholders that are very focused on the long term. So, it's not that important how Kraft performs quarter-to-quarter. Management's relentless effort to cut costs should continue to drive growth in earnings, so investors shouldn't have to worry about the bottom line. The most important thing to watch going forward is whether Kraft Heinz can reaccelerate sales growth amid a consumer backlash against packaged foods.