Don't panic -- this is just business as usual right now, priming the pump of a long-term cash machine.

Netflix (NFLX -4.44%) is tapping the debt market again. The digital video veteran raked in $1.6 billion this time, all in U.S. dollars, and the debt papers were signed on the same day that the debt-raising plan was announced.

This is what Netflix's debt portfolio looks like today:

The May 2017 round is unusual because it was raised through European banks and paid in Euros. The effective balance of that particular bond varies over time, along with fluctuations in the dollar-to-Euro exchange rate, and that effect reduced Netflix's third-quarter earnings by $0.09 per share. The rest of the company's debt papers, including the new addition, have nothing to do with foreign currencies, and their market value will remain stable over time.

The new senior notes increased Netflix's long-term debt balance by 33%, stopping at a grand total of $6.5 billion. Cash on hand instantly doubled to approximately $3.3 billion. The company is essentially tacking $1.6 billion on at the end of these two chart lines: 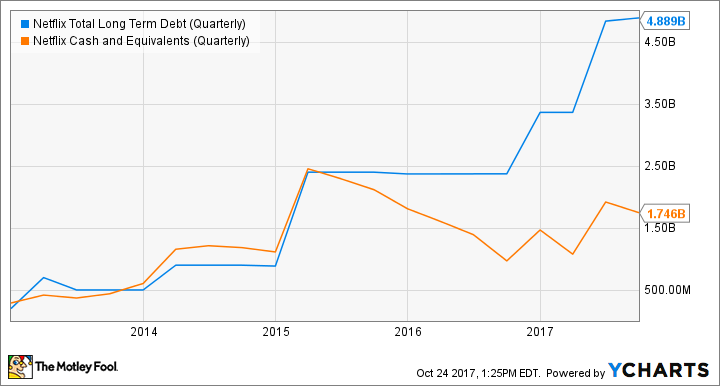 Why is Netflix signing up for more debt?

It's no secret that Netflix needs additional capital to keep its ambitious content production slate going. The company is reporting positive earnings and EBITDA profits these days, but those metrics do not account for the high cash costs of producing Netflix-branded shows and movies. That's an expense directly against cash flows, and Netflix has burned $2.1 billion of negative free cash flows over the last four quarters.

Management has made it clear that this will continue for a few more years.

"Negative FCF, despite growing operating income, is due to growth of our content spend, original content in particular, where we pay for the titles before consumers enjoy the content, and the asset is amortized by estimated viewing over time," Netflix stated in the recent third-quarter earnings release.

And there is little doubt about which capital market Netflix prefers tapping into:

"We anticipate financing our capital needs in the debt market as our after-tax cost of debt is lower than our cost of equity," the earnings report continued.

In other words, Netflix management prefers selling bonds over issuing additional shares of stock, when push comes to shove. Stock-based equity is more expensive for highly volatile stocks, and that's certainly true for Netflix, where share prices have jumped 54% higher in the last 52 weeks, more than tripling in three years. So debt becomes the cheaper way to access fresh capital, and that choice doesn't saddle shareholders with heaping loads of share dilution along the way. The debt option looks even better when you consider the tax benefits that come with making interest payments.

Okay, so Netflix clearly needs to raise cash every so often, and using debt papers to get it done also makes sense. But why now? The cash barrel hasn't exactly been emptied in recent quarters, after all.

The U.S.-based portion of Netflix's latest cash balance update actually works out to roughly $1.3 billion, down from $1.46 billion at the end of 2016. The rest is sitting in foreign accounts around the world, collected either from overseas operating profits or as part of the Euro-based debt round. Moving cash across national borders can be costly, so it's generally best to leave your cash collecting interest where it was made in the first place -- or put it to work locally. So the American cash reserves have been drying up, albeit at a fairly slow pace.

From that perspective, Netflix just boosted its domestic cash balance by 123% overnight. Content production is a messy, lumpy business where the costs can vary wildly from one quarter to the next, and it's starting to look like Netflix's production teams have a busy winter ahead of them.

Long story short, this is business as usual for Netflix. The business is running on borrowed cash for now, to be repaid a few years down the road when the big bet on original content has matured and started returning more cash than it consumes. Don't panic over Netflix and its rising debt balances.