Please ensure Javascript is enabled for purposes of website accessibility
Log In Help Join The Motley Fool
Free Article Join Over 1 Million Premium Members And Get More In-Depth Stock Guidance and Research
By Matthew DiLallo – Oct 24, 2017 at 11:00AM

The hotel REIT's financial results were above its guidance range despite having to temporarily shut down its resort in Naples.

Pebblebrook Hotel Trust's (PEB 0.44%) third-quarter results came in well ahead of expectations after guests flocked to its recently redeveloped hotels. That said, profitability did decline from the year-ago quarter because the company sold several hotels over the past year. Furthermore, Hurricane Irma forced the closure of the LaPlaya Beach Resort & Club in early September, and it will remain closed until repairs wrap up next month. That said, despite the lost income from that resort, Pebblebrook expects full-year results to be within its guidance range. 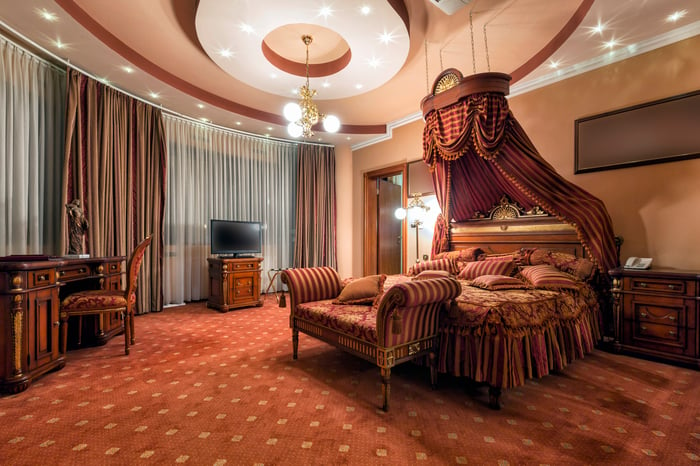 During the third quarter, our hotels performed better than our overall expectations, even with the negative impact from several natural disasters that occurred during the quarter, as Same-Property EBITDA, Adjusted EBITDA and Adjusted FFO exceeded our outlook. Our recently redeveloped hotels including Union Station Hotel Nashville and Hotel Zeppelin San Francisco led the portfolio in the third quarter, as these hotels continue to ramp up their performance following their recent transformations. In addition, overall macro-economic factors remain encouraging and would seem to indicate improvements in the economy and travel demand ahead in 2018.

Pebblebrook overcame several headwinds during the quarter (both figurative and literal). One of the bright spots was in San Francisco, where the company's hotels performed better than anticipated despite the continued renovation and expansion of the Moscone Convention Center, which is a major driver of hotel stays in the area. Meanwhile, another positive has been the growth in its non-room revenue, which includes food and beverage. The hotel REIT expects these income streams to continue growing, because one of its focuses has been to redevelop many of the restaurants and bars at its hotels.

Pebblebrook is once again tweaking its full-year guidance thanks to better-than-expected quarterly results. The hotel owner now sees AFFO coming in between $173.8 million and $176.8 million, which is slightly higher than the midpoint of its previous guidance range of $171.7 million to $177.7 million. Meanwhile, the company anticipates that AFFO per share will be in the range of $2.48 to $2.52, which is also a bit higher at the midpoint than its prior guidance range of $2.45 to $2.53 per share.