Please ensure Javascript is enabled for purposes of website accessibility
Log In Help Join The Motley Fool
Free Article Join Over 1 Million Premium Members And Get More In-Depth Stock Guidance and Research
By John Maxfield - Oct 24, 2017 at 9:27AM

This explains why banks have strived over the years to build up this business.

As a general rule, JPMorgan Chase (JPM 0.02%) generates enviable profitability, especially given the fact that it's so big. But not all of the New York-based bank's business units are equally profitable. In fact, you might be surprised to find out which one stands out from the rest.

Profitability at a bank like JPMorgan Chase tends to be measured by one of two metrics. The first is return on assets, which is calculated by dividing a bank's net income by its total assets. This shows a bank's unleveraged profitability. 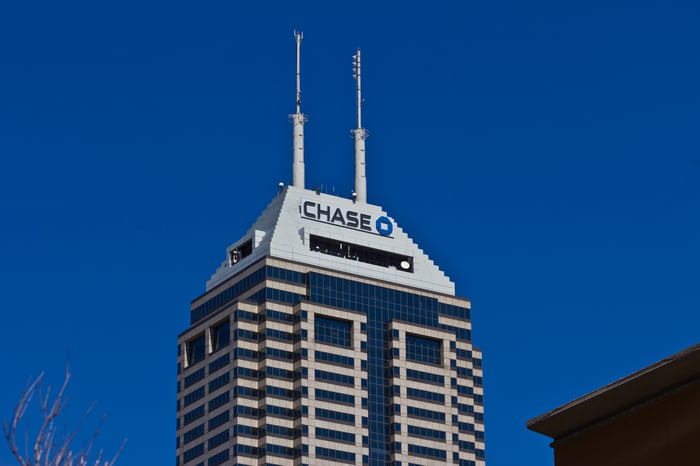 The second metric, and the one we'll be looking at here, is a bank's return on equity. This is similar to return on assets, but the denominator in the calculation is shareholders' equity as opposed to assets. This measures a bank's profitability including leverage, which is a fundamental characteristic of banking.

Overall, JPMorgan Chase earned an 11% return on equity in the third quarter, the results of which the nation's biggest bank by assets released in the second week of October. This exceeds the 10% threshold that most banks strive to beat, making its latest performance particularly impressive given the inhospitable operating environment facing banks right now, with low interest rates and high regulatory costs.

As a universal bank, JPMorgan Chase operates in a variety of different subsectors of the financial services industry. This diversity is reflected in the bank's four operating segments:

JPMorgan Chase's consumer and community bank is its biggest segment, generating net income of $2.55 billion in the three months ended Sept. 30. Together with its commercial banking segment, these are the two units at JPMorgan Chase that one can think of as a Main Street bank, focused primarily on making loans and holding deposits.

But while consumer banking may be JPMorgan Chase's biggest segment when it comes to total net income, it isn't the most profitable. And the same can be said of its commercial banking segment, which provides banking services to large companies and other types of institutions.

Not even JPMorgan Chase's famed investment bank is its top segment in terms of profitability. This may be surprising to some, given the dominance of this segment on Wall Street. It's also a bit surprising because this segment produces almost as much income as JPMorgan Chase's community bank, but with much less revenue -- $8.6 billion in second-quarter corporate and investment banking revenue vs. $12 billion in community banking revenue.

Instead, it's JPMorgan Chase's smallest segment that also happens to be its most profitable -- namely, asset and wealth management. Its return on equity last quarter was 29%. That's nearly three times the standard threshold in the bank industry, and it's well above the runner-up segment at JPMorgan Chase, consumer and community banking, which reported a 19% return on equity last quarter.

In short, if you're wondering how JPMorgan Chase has been able to generate consistent and respectable profitable through such tumultuous times, one culprit that should not be ignored is its asset and wealth management segment.