Boeing continues to produce record free cash flow -- and it has more room for improvement in the coming years.

On Wednesday morning, Boeing (BA -0.14%) continued its run of strong performance, posting a solid profit, despite absorbing another charge related to its KC-46 military tanker development program. Furthermore, the company increased its free cash flow compared to the excellent result it posted in the year-ago period. This is allowing Boeing to return massive amounts of cash to its shareholders.

Boeing returned to revenue growth in the third quarter as the 737 production rate increased and deliveries of the new 737 MAX started to ramp up. The increase in output was supported by an order backlog that remains just shy of $500 billion.

Boeing's core operating margin also ticked up by 0.6 percentage points, reaching 9.8%. This was a testament to the company's improving operational performance, as Boeing took a $329 million charge on the KC-46 tanker program during the quarter. This reflects additional costs related to modifying early production aircraft to incorporate recent design changes. Without the KC-46 charge, Boeing would have posted a core operating margin of more than 11%. 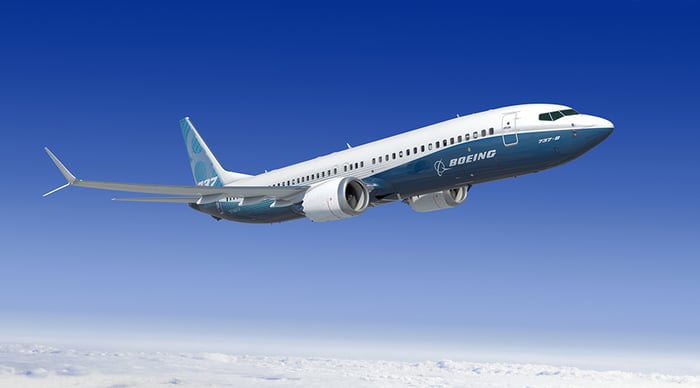 Reaping the rewards of success

Boeing's recent cost-cutting efforts and steadily falling production costs for the 787 family have driven stellar cash flow growth this year. Through the first nine months of 2017, Boeing has generated $9.1 billion of free cash flow, up more than 60% year over year.

This rising cash flow has allowed Boeing to return significantly more cash to its shareholders. In each of the first three quarters of the year, the company has repurchased $2.5 billion of stock. It has also paid out more than $2.5 billion in dividends year to date, having raised its quarterly dividend by 30% last December.

As a result, Boeing has already returned more cash to shareholders in the form of dividends and buybacks during the first nine months of 2017 than the $9.8 billion it returned in all of 2016. Importantly, almost all of these capital returns have been funded by free cash flow rather than incremental debt.

Boeing stock has surged more than 90% just in the past 12 months. After years of skepticism, investors finally seem to be taking Boeing's free cash flow potential seriously. 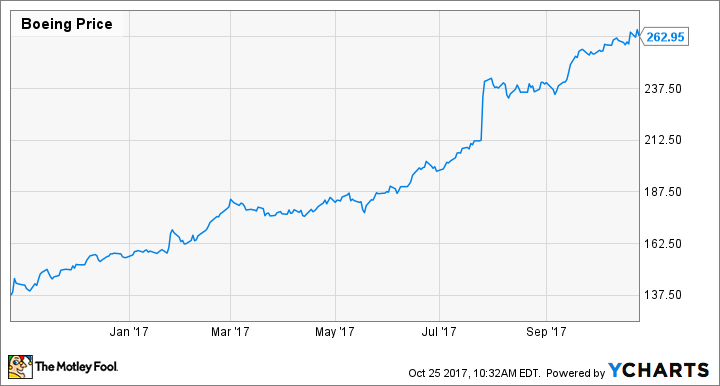 Fortunately for Boeing shareholders, the outlook for free cash flow growth remains positive. The company's decision last month to boost Dreamliner production from 12 per month to 14 per month in 2019 will help in a big way.

Just two years ago, Boeing was still losing money on every Dreamliner it built. However, as unit costs have decreased and the product mix has shifted to the more lucrative 787-9 model, Dreamliner production has turned consistently cash-positive. This has allowed Boeing to reduce its deferred production costs -- essentially a tally of the cash losses incurred on Dreamliner production thus far -- by nearly $1.6 billion over the past four quarters.

Mix improvements will continue in the next couple of years as Boeing starts building the largest Dreamliner model, the 787-10. Meanwhile, production costs are set to decline further due to scheduled pricing reductions from suppliers. A faster production rate will drive costs even lower, primarily by allowing Boeing to spread its fixed costs over more aircraft.

As a result, the Dreamliner program's cash flow production could more than double in the next few years. This should allow Boeing to continue rewarding shareholders with a rising dividend and ample share buybacks.