Long a favorite in Europe but ignored in the U.S., sparkling water consumption among Americans is now surging. Sales have increased 42% over the last five years and continue to grow.

The trend has propelled stocks like La Croix-parent National Beverage (NASDAQ:FIZZ) and SodaStream International (NASDAQ:SODA) -- which has pivoted from soda to a sparkling water brand -- to new heights.

As the chart below shows, both stocks have surged this year. 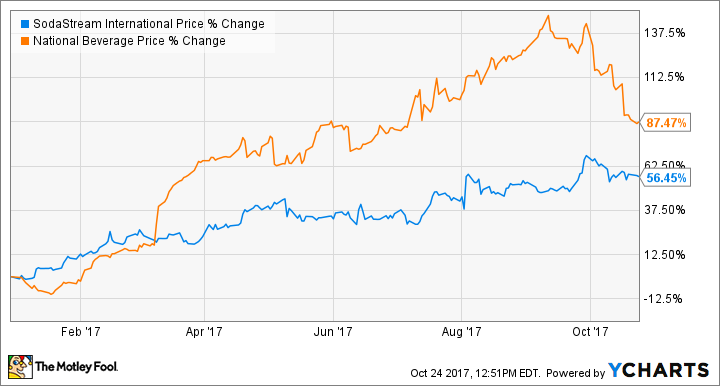 The big boys, Coca-Cola (NYSE:KO) and PepsiCo (NASDAQ:PEP), have taken notice. Amazingly, until recently the two beverage giants had no significant sparkling water brands of their own, but that is quickly changing. 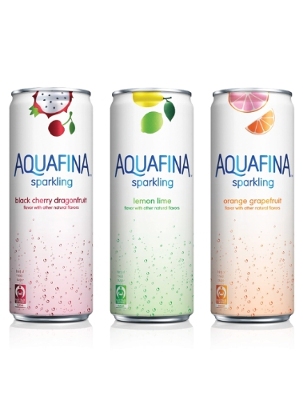 Pepsi's Aquafina launched a line of flavored sparkling water last year with multiple flavors including black cherry dragonfruit, while Coca-Cola has made similar moves by introducing brand extensions of Dasani and SmartWater with sparkling water versions. However, Coca-Cola's biggest move into sparkling water came earlier this month when it made its first acquisition in the space.

Bringing out the big guns

Acquiring small brands and using their distribution and marketing muscle to pump up sales has been a key component of Coca-Cola's strategy over the last generation. The company has swallowed up brands like Zico coconut water, Honest Tea, and Glaceau, the maker of VitaminWater, in addition to similar partnerships with Keurig Green Mountain and Monster Beverage. Now, Coke appears to be using the same tactic with sparkling water with its purchase of Topo Chico, a Mexican-made premium sparkling mineral water, which it acquired on Oct. 2 for $220 million.

If you haven't heard of Topo Chico, there's a good reason for that. Though the brand is sold in 35 U.S. states, 70% of its domestic sales come from Texas, where it's much better known and in wider distribution. It's even become a favorite cocktail mixer at bars in Austin. Topo Chico will join Coke's Venturing and Emerging Brands portfolio, a 10-year-old division that has shepherded products like the ones above into larger markets.

National Beverage stock did not take to the news well as shares dropped nearly 11% in the two days following the announcement, and have continued to slide since then. They're now down 22.6% so far this month. CEO Nick Caporella even issued a bizarre press release in hopes of shoring up the stock after the recent pullback. Caporella noted that the company has seen 60% organic revenue growth over the past ten years and that revenue continues to accelerate.

What's next for National Beverage

Part of the recent pullback in La Croix-maker's stock may simply be a market correction as the stock has gotten pricey, trading at a price-to-earnings of over 40. Recent growth has been strong as revenue increased 20% to $260 million and EPS was up 32% to $0.82 in its first quarter of fiscal 2018, but the question for shareholders may be if La Croix's moment in the limelight is sustainable. The company is making a big push for the beverage with a new Key Lime flavor and expansion into Canada.

That expansion and accelerating revenue growth could be a sign that National Beverage and its star sparkling water brand is just starting to break out. Revenue is headed for more than $1 billion this year, but that pales in comparison with Coca-Cola, which brings in more than $40 billion annually. If National Beverage can ramp up expansion into convenience stores and other locales where Coke products are ubiquitous it could have a bright future ahead of it. But Coke's recent decision to acquire Topo Chico means that a La Croix takeover is probably not in the cards.

Whether or not La Croix's buzz remains, sparkling water looks like it's here to stay. The beverage is a healthier alternative to sodas and is better-tasting than still water. In Europe, sparkling water's market penetration is about 30% compared to just 3% in the U.S.

Expect Coke and Pepsi to continue to go after this hot market with new brand launches and acquisitions. Over time, that could threaten La Croix's improbable rise.