Please ensure Javascript is enabled for purposes of website accessibility
Log In Help Join The Motley Fool
Free Article Join Over 1 Million Premium Members And Get More In-Depth Stock Guidance and Research
By Rich Smith - Updated Oct 25, 2017 at 11:23AM

RBC Capital picks Synopsys as the one IoT stock to trump all others.

Internet of Things stocks are a hot commodity in investing these days. By connecting everyday appliances ranging from light bulbs to refrigerators to alarm clocks to... everything else, IoT promises to make the entire world more interconnected, more efficient, and a whole lot smarter. But which stock is the best one to buy to profit from the Internet of Things revolution?

RBC Capital thinks it knows. Now here's what you need to know. 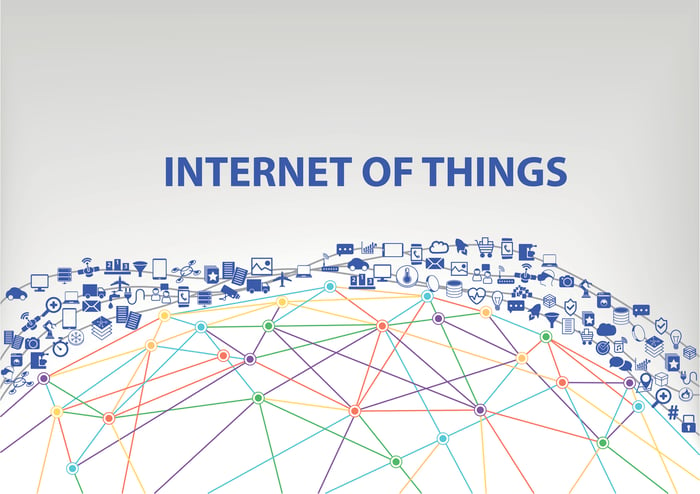 One day, the Internet of Things may connect the world -- but is Synopsys stock really the best IoT stock in the world? Image source: Getty Images.

What is Synopsys, exactly?

This morning, RBC capital announced that it is upgrading Synopsys (SNPS -0.81%) -- already one of its buy-rated stocks -- to the level of its "Top Pick." Assigning Synopsys a $100 price target, RBC predicts that Synopsys stock will return approximately an 18% profit to new investors today. But what is Synopsys anyway?

Synopsys is that "someone" that codes the software that operates the machines that make the chips that make the Internet of Things possible. Sitting at the top of the IoT supply chain, Synopsys is also RBC's top pick.

Synopsis of a buy thesis

What is it that makes Synopsys RBC's favorite IoT stock? According to the analyst, semiconductor chip designs and redesigns are becoming increasingly complex, and require more and more advanced electronic design automation (EDA) tools to manufacture and test them. As a key member of the government's Intelligence Advanced Research Projects Activity (IARPA) team, and recipient of an IARPA contract to develop superconducting electronics, Synopsys possesses the expertise needed to keep up with developments in EDA.

As explained in a write-up on TheFly.com (requires subscription) this morning, RBC expects the company to translate this expertise into improving profit margins over the next two to three years as the company increases its exposure not just to IoT, but to the manufacturers of semiconductors for use in artificial intelligence and driverless cars as well.

So how has that thesis been working out?

Synopsis of a more efficient business

Pretty well, actually. Despite generally declining gross margin, Synopsys has been cutting costs out of its business, allowing its operating profitability to grow as a result. According to data provided by S&P Global Market Intelligence, over the past three years, Synopsys has expanded its margin by 3.5 percentage points -- growing from 12.1% in fiscal 2014 to a recent high of 15.6% operating profit margin over the past 12 months.

Profits are growing as a result, with annual net income up roughly 27% over the past three years. But where you really see Synopsys' moneymaking strength is on its cash flow statement, which shows that over the past 12 months Synopsys has generated nearly $530 million in positive free cash flow -- 60% ahead of the company's reported $329 million in net income. Further improvements in profit margin should only grow that cash haul over time.

What does this mean for investors? Valued on net income alone, Synopsys stock looks extremely expensive at 40 times earnings. Valued on the company's real free cash flow, however, the stock sells for a more reasonable multiple of just 24 times FCF. (The stock looks even cheaper when you back out net cash from its market cap. Synopsys's enterprise value-to-free-cash-flow ratio works out to just a little more than 22.)

Are these valuations cheap enough to buy? That all depends on how fast Synopsys can grow going forward, and this is where things get tricky for an investor. According to the consensus of analysts surveyed by S&P Global, Synopsys's profits could grow as slowly as just 9% annually over the next five years. More optimistic analysts believe Synopsys can roughly double its earnings between 2016 and 2020, which works out to a growth rate of 18% annually -- but even this faster growth rate would fall just short of justifying a 22-times-free-cash-flow valuation for Synopsys stock.

Long story short? RBC capital spins a good story about Synopsys stock, but with Synopsys shares up 44% already over the last 12 months, I fear a lot of the value has already been baked into this share price. My synopsis: Although the prospects look bright for Synopsys' business, the stock currently looks too expensive to buy.

Why Synopsys Stock Gained 15% in August