Please ensure Javascript is enabled for purposes of website accessibility
Free Article Join Over 1 Million Premium Members And Get More In-Depth Stock Guidance and Research
By Chris Neiger - Aug 11, 2017 at 10:46AM

The Internet of Things market is already huge, and it's still growing. Here's what investors should know.

The Internet of Things (or IoT) sounds like one of those futuristic buzzwords that's still just a little too far off to think much about. But the IoT -- where once-unconnected things like watches, cars, healthcare equipment, etc. will be connected to the Internet -- is already here, and it's changing our health, how we build things, and how we get around, and creating billions of dollars in value across multiple sectors.

So let's take a look at some of the most mind-blowing IoT stats and why all of it matters for investors. 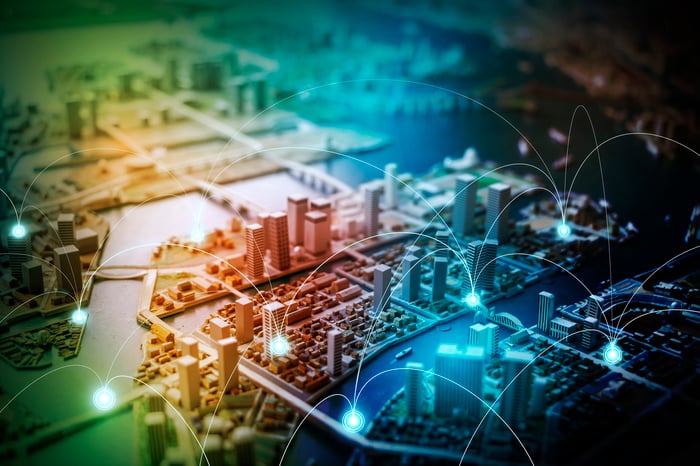 3. Spending on IoT devices and services will reach nearly $2 trillion this year. That spending will mostly be spread across North America, China, and Western Europe, where  about 67% of IoT devices exist.

4. Consumers are still driving IoT device growth right now, and will account for 5.2 billion IoT devices this year, which represents 63% of the market.

5. Wearable devices like Apple's ( AAPL -1.17% ) Apple Watch and Fitbit's ( FIT ) fitness trackers are growing in popularity, and wearable until sales will reach 82.5 million in 2020, according to IDC. The competition is already heating up in this segment, with China-based Xiaomi's wearable devices leapfrogging shipments of Apple's wearables and Fitibit's devices for the first time last quarter.

7. According to a PTC report, manufacturing will be the biggest IoT platform by 2021, reaching $438 million as the Industrial Internet of Things (or IIoT) increases efficiency and decreases downtime for manufacturing companies. A separate study by Accenture says the IIoT could help reduce machinery breakdowns by 70% and reduce overall maintenance costs by 30%. 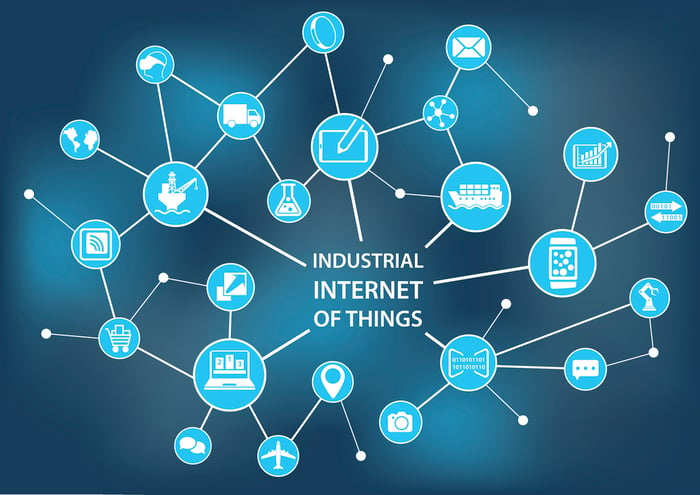 8. The surge from industrial companies using IoT devices should have very positive results for economies around the world. Accenture estimates the the IIoT will add $14.2 trillion to the global economy by 2030. That's great news for IoT pure plays like CalAmp ( CAMP -1.58% ), which sells hardware, software, and services that connect industrial equipment to the Internet. CalAmp made about 86% of its total 2016 revenue from its mobile resource management (MRM) technologies and machine-to-machine (M2M) communications tech.

9. IDC expects 80% of consumer service interactions in the healthcare industry (like meeting with your doctor) to use IoT and other analytics services by 2020. Alphabet's ( GOOG -0.87% ) ( GOOGL -0.68% ) Google recently relaunched its Google Glass device and found that that using it allowed doctors to easily access patient information and decrease the amount of time it took them to take notes -- both of which resulted in more time spent with patients.

10. The Internet of Things also has the ability to improve our quality of life beyond the doctor's office. Bosch estimates that Internet-connected cars will reduce traffic accident injuries by 350,000 every year by 2025, and save 11,000 lives each year.

11. According to BI Intelligence research, agricultural IoT device shipments will jump from 43 million this year to 75 million in 2020. Agricultural companies are investing in technology that helps them to know where, when, and how much seed to plant using sensors, pre-planned seeding maps, and GPS-connected equipment. This precision farming and smart agriculture will make growing food more efficient and help farmers keep up with rising food production needs. 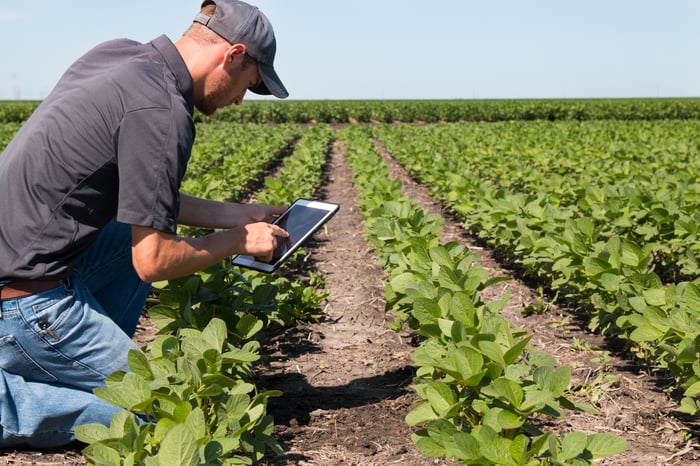 The IoT will transform many different industries, but investors should remember that not all companies are betting on the IoT at the same scale. For example, the Apple Watch leads the smartwatch pack, but Apple brings in just 6% of its total revenue from sales of its "other products" (which include the Watch, Apple TV, Beats headphones, and other accessories). Apple could eventually become a bigger player in the wearable devices space if it launches its rumored augmented reality glasses, but at this point the iPhone maker doesn't have tons of IoT exposure. A better bet may be CalAmp, with its its industrial IoT equipment and services, which makes nearly all of its revenue from the IoT.

Additionally, the IoT faces some serious security risks. The Mirai botnet attack in 2016 targeted IoT devices and used them to make a Distributed Denial of Service (DDOS) attack (when a server is flooded with so much traffic that it crashes). That resulted in Netflix, Shopify, Twitter, and other sites going offline for a while. The cost of adding connectivity to devices and other things continues to come down, which is great for IoT device expansion -- but it has also made it easy for smaller players to release devices that aren't secure.

All of this means that IoT investors should look for solid businesses in established markets, and bet on them over the long-term. The Internet of Things is growing quickly, but it will still take years for it it to mature and for some companies to see the benefits.