Please ensure Javascript is enabled for purposes of website accessibility
Free Article Join Over 1 Million Premium Members And Get More In-Depth Stock Guidance and Research
By Chris Neiger - Jul 21, 2017 at 11:06AM

Google has relaunched Glass for the enterprise market, and there's research showing this might be a good bet for the company.

Alphabet's ( GOOG -0.87% ) ( GOOGL -0.68% ) Google has officially brought back Google Glass after a pretty spectacular failure in the consumer space just two years ago. Apparently, people don't want cameras constantly pointed at their faces and to never know whether they're being recorded.

But unbeknownst to nearly everyone besides Google and a few companies, the tech leader quietly repurposed its wearable tech over the past two years for enterprise uses. Now Google has brought glass back into the light, and it's already proving to be a valuable asset for the enterprise market. 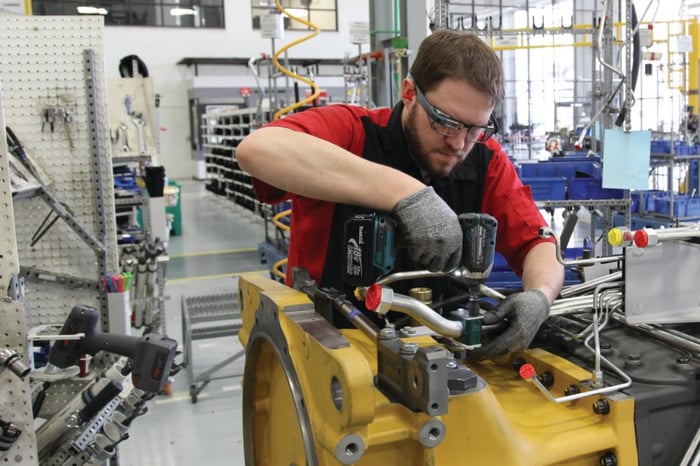 Before we look at Google's opportunity with Glass, we need to first understand what the new Google Glass Enterprise Edition is and how it's already helping companies improve their efficiency.

On the Glass website, Google says the device helps users "[a]ccess training videos, images annotated with instructions, or quality assurance checklists that help you get the job done, safely, quickly, and to a higher standard."

The Wi-Fi-enabled glasses allow factory workers, doctors, mechanics, and others to see manuals, instructional videos, health information, etc. all in their line of sight. The users are also able to call each other and share what they're seeing so that they can collaborate or ask questions about what they're doing, without the need for the other person to be physically present.

One major change with Glass Enterprise Edition from the consumer version is that it now has a light that indicates to others when a user is recording something. That's notable, because the lack of that simple feature was a major hurdle for consumer adoption with the previous version. Another key difference is that Glass can be attached to existing safety goggles and other lenses, so that they work better in the environments and with those who are using them.

There are 50 businesses already using Glass, and the results have been pretty impressive. For example, Google says AGCO, an agricultural manufacturing company, has seen a 25% reduction in production time on some of its low-volume, complex assemblies. General Electric and its partners have used Glass to improve the wiring assembly for some of its turbines and has seen a 34% increase in productivity, compared with using paper manual instructions for the same tasks.

Doctors at Sutter Health are using Glass to automatically take notes while they're with patients and bring up relevant patient information. The result has been a reduction in time spent logging patient notes at a computer and an increase in time spent with patients.

Finally, DHL gave some of its order pickers Google Glass so that they could fulfill customer orders without having to scan items before they moved them out of carts and into bins. The result was a 15% increase in operational efficiency, on average.

All of this is good news for companies looking to improve their efficiency, but how is Glass really going to benefit Google? The opportunity comes from the growing enterprise wearable tech market. Forrester Research estimates that 14.4 million U.S. workers will use smart glasses for their jobs by 2025, which is up from just 400,000 this year. Grandview Research believes the worldwide market for enterprise wearables will reach $22.3 billion by that same year.

Google clearly sees the value in repurposing its Glass device to tackle this growing market, but it's still unclear how things will unfold. Microsoft ( MSFT -1.97% ) is taking a similar approach with its Hololens headset and has already made the device available to developers. Google Glass is cheaper than Hololens, though, with prices varying from $1,300 to $1,500 versus Hololens' $3,000 price tag.

But the real obstacle for Glass probably won't come from its competitors. Google will have to prove in more than just some test cases that Glass is a truly useful tool in many different work environments over the long term. While there is potential for this to be the case, investors probably shouldn't get any lofty ideas about seeing Glass rake in huge revenue for the company.

I think Glass is viable in the enterprise market right now, and I think it could even help Google make a return to the wearable consumer market eventually, in the form of yet another iteration of the device. Apple is rumored to be working on its own augmented-reality glasses, and you can bet that if consumers appear ready to embrace the iPhone maker's glasses then Google would be likely to bring back a consumer version of Glass as well.

Until then, investors should see the enterprise edition of Glass for what it is: a good way to keep pursuing wearable technology at time when augmented reality is gaining acceptance among both companies and consumers.