Please ensure Javascript is enabled for purposes of website accessibility
Log In Help Join The Motley Fool
Free Article Join Over 1 Million Premium Members And Get More In-Depth Stock Guidance and Research
By Demitri Kalogeropoulos - Oct 26, 2017 at 10:00AM

A few charts that explain how a tiny DVD-by-mail specialist has grown into a global entertainment powerhouse.

Netflix's (NFLX -0.98%) streaming service has come a long way in the 10 years since its launch. Back then, executives predicted that video discs would continue to dominate the entertainment market, but that their new streaming offering would eventually take over. "At some point in the future, internet delivery of content to the home will surpass DVD," management said in their 2008 annual report.

With 109 million streaming members at last count, it's fair to say that the inflection point came sooner than Netflix had expected. Here are a few ways that home streaming shift has impacted the business lately.

Netflix investors had many reasons to expect the company to slow its expansion pace in 2017. CEO Reed Hastings and his team rank high on that list, given that they projected slowing subscriber growth over the first half of the year.

That's not at all what happened, though. Netflix is now running about 3 million members ahead of its forecasts so far for the year. Just hitting its fourth-quarter projection, meanwhile, will mean that the streaming video giant gained about 22 million members in 2017 to mark its fourth consecutive year of accelerating gains. Netflix's international segment is delivering a greater portion of those subscriber gains. In fact, that business chipped in less than half of its new paying members in 2013, while this year that figure is about 79%. As a group, these outside markets should produce about $200 million of segment profit for the year. That figure will likely grow meaningfully for many years just as Netflix's contribution margin in the U.S. jumped from 23% at the start of 2014 to about 40% today. 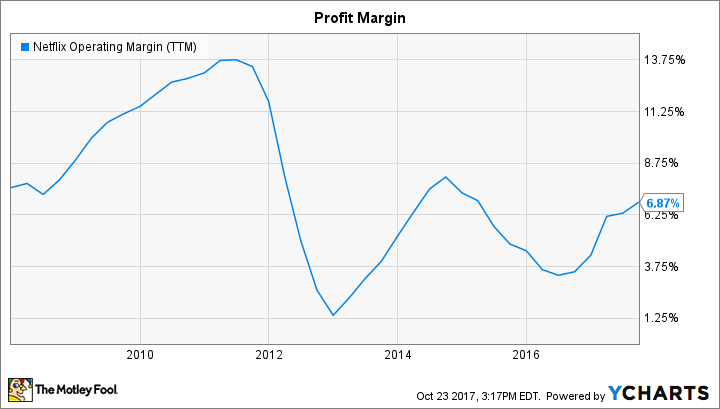 Netflix is spending about $8 billion to run its streaming service for the year, and content costs are only expected to rise from here. Yet the combination of fast sales growth and rising monthly prices is powering a solid improvement in profitability even though the company is spending more heavily on its TV shows and movies.

Operating margin is on track to rise to 7% of sales this year from 4% in 2016. That number will keep marching higher from there, if you believe the management team, as Netflix balances its growth priority against a desire for bigger profits. 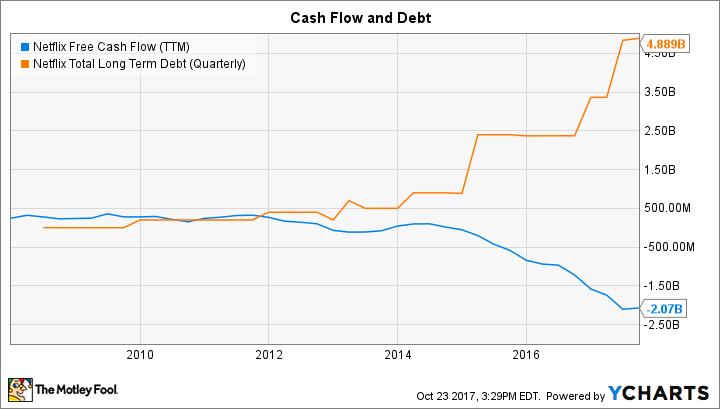 There's a big downside to the content strategy that's powering Netflix's awesome membership growth. Original content requires an upfront cash commitment that the company can only recoup much later once the content begins streaming to its members.

Netflix's focus on that kind of content means it should burn through over $2 billion this year, on top of a $1.7 billion outflow in 2016. These cash needs are far greater than operating earnings, and so Netflix must close the gap with debt, which is likely to continue growing for many years. Netflix has over $17 billion of content spending commitments on its books today, with around $8 billion of that spending set for 2018. Rather than looking at this figure as a big liability, Hastings and his team see that portfolio as a critical asset that they'll be able to use over the years to boost subscriber engagement and attract new users.

Citing that $17 billion commitment and the $2.5 billion of owned content it has built up, the CEO recently told investors, "We remain quite comfortable with our ability to please our members around the world."

Happy, engaged subscribers will be key to whatever growth Netflix's streaming service manages in its second decade of existence.