Verizon Communications (NYSE:VZ) is the largest consumer wireless service provider in the United States. It also owns a wireline business, providing phone, internet, and video service to the home, as well as a digital media business called Oath, combining the assets of Yahoo! and AOL.

The vast majority of its revenue and earnings come from its wireless business, where it faces intense competition from T-Mobile (NASDAQ:TMUS), Sprint (NYSE:S), and AT&T (NYSE:T). As T-Mobile and Sprint make moves to win over customers, they have chipped away at the industry economics that have benefited Verizon and AT&T. That's leaving some investors wondering whether Verizon stock is a buy. 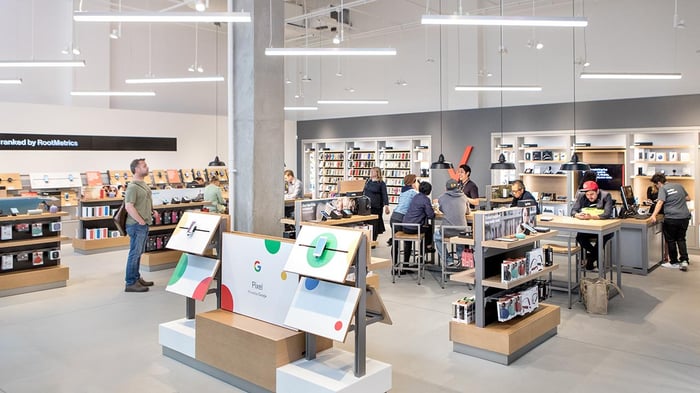 Does Verizon have a moat?

Verizon's scale also protects it against future entrants into the industry. Building out a wireless network requires substantial upfront costs. There are also barriers to obtaining the wireless spectrum necessary to operate a wireless service. Considering these barriers, the threat of a new competitor entering the space in earnest is low. Companies like Comcast and Charter are actually using Verizon's network to launch their own wireless services instead of trying to enter the market on their own.

Verizon also has a strong brand and network. That gives it some pricing power, but improvements in T-Mobile's network combined with its aggressive pricing have cut into Verizon's ability to charge a premium.

Verizon is still, in my opinion, the best-positioned wireless carrier in a hyper-competitive market.

Trending in the right direction

Verizon's third-quarter earnings report gave a few reasons to be optimistic about the company's future.

First of all, Verizon added over 250,000 net postpaid phone subscribers for the second quarter in a row. That reverses a trend of poor or negative net adds over the last couple years. That also shows the strength of Verizon's brand and network in both retaining existing subscribers and attracting new ones.

More importantly, Verizon has started to turn around its falling wireless service revenue. The amount Verizon brought in from service contracts last quarter increased for the first time in three years, and management said the trend will continue in the fourth quarter. That said, service revenue is still falling year over year, but should start to show improvements as soon as next year.

Verizon is a strong company and its operations are moving in the right direction, but whether or not the stock is a buy ultimately comes down to what investors have to pay for it.

Here's how the four major wireless companies stack up in terms of valuation.

With an EV-to-EBITDA ratio of 6.9, Verizon appears to be fairly valued. It's trading for the same multiple as AT&T, its closest competitor. Considering AT&T's massive investment in the pay-TV industry and its declining postpaid phone subscriber base, I think Verizon's growth prospects are actually better than AT&T's and should earn it a higher multiple.

Meanwhile, T-Mobile trades for a slightly higher EV-to-EBITDA ratio. It probably deserves a higher multiple than Verizon due to its rapid growth. The opposite is true for Sprint, and it's reflected in its depressed price.

As such, Verizon appears fairly valued on an EV-to-EBITDA ratio. For investors looking to get into the wireless industry, it presents a good buy right now. I'll be holding onto my own shares for the foreseeable future.