Oceaneering International's (NYSE:OII) return to profitability didn't last long. After finally jumping back into the black last quarter -- reversing a string of losses -- the offshore service and product company's earnings headed back into negative territory during the third quarter. The company expects that trend to continue. It anticipates an even deeper loss next quarter and that 2018's results will "significantly lower" than this year's because the oil industry expects to spend even less money drilling offshore. 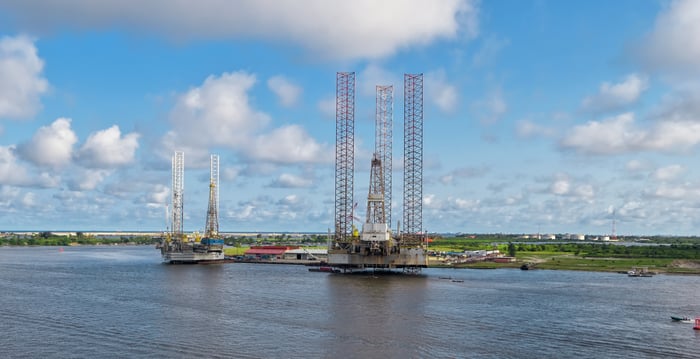 Our third quarter adjusted operating results were in line with our expectations, with the exception of ROVs. Furthermore, each of our operating segments remained profitable and generated substantial EBITDA. On a consolidated basis, for the first nine months of 2017, we have generated $179 million of adjusted EBITDA and $84 million of free cash flow. These results are commendable in light of an offshore oilfield services and products market landscape that remains extremely challenging due to continued pricing degradation and the sluggish rate of subsea project approval and progression.

Oceaneering reported a solid quarter considering how tough the offshore drilling market is these days. Furthermore, despite the reported loss, the company has remained cash flow positive this year, which is giving it the money to continue paying a dividend while maintaining a healthy balance sheet.

Unfortunately, Oceaneering doesn't expect market conditions to improve anytime soon. According to Larson, seasonality and reduced industry activity levels would cause fourth-quarter results to be "considerably lower" than the third quarter. That said, he still expects the company to be "marginally profitable at the operating income line" for the full year.

However, as challenging as 2017 has been, Larson believes that 2018 will be even worse, stating:

Based on the current number of floating rigs working and expectations for further reductions in oil and gas industry capital and operating expenditures as offshore activities get pushed into 2019, we believe our 2018 earnings will be significantly lower than 2017.

On the bright side, he did note that the company expects to generate enough cash flow to service its debt and fund maintenance and expansion capital expenses. He also anticipates that offshore activity levels should start improving in the second half of next year and that oil and gas companies will eventually invest more money offshore so they can meet future oil demand.