Find out what made these stocks climb so much higher than the overall market.

The stock market had a relatively quiet day on Thursday, with major benchmarks inching higher as investors continued to believe in the long-term prospects for the U.S. economy. Market participants are looking forward to getting their first major reading on earnings from the biggest technology-sector players in the coming days, but for now, investor sentiment has been able to overcome what would ordinarily be a troubling rise in long-term bond yields that could signal a steeper move higher for interest rates in the near future. Some stocks responded quite favorably to good news, and Buffalo Wild Wings (BWLD), Whiting Petroleum (WLL), and Spirit Airlines (SAVE 0.91%) were among the best performers on the day. Below, we'll look more closely at these stocks to tell you why they did so well.

Shares of Buffalo Wild Wings finished higher by more than 19% after the company reported third-quarter financial results. At first glance, the sports bar and casual-dining establishment's numbers might not have seemed all that impressive, with a revenue gain of less than 1% and a double-digit drop in adjusted net income. Yet despite declines in comparable-restaurant sales of about 2% to 3%, Buffalo Wild Wings impressed its shareholders with the extent to which it has followed through on cost-cutting moves to improve its internal efficiency. Even though some investors had feared that changing a popular half-price wings deal could backfire, Buffalo Wild Wings has executed well, and that could point to even better times ahead. 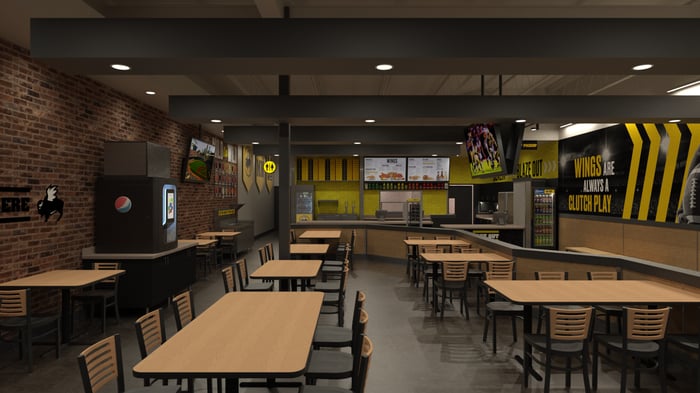 Whiting Petroleum stock jumped 14% in the wake of the company's third-quarter financial and operating results. The oil and natural gas exploration and production company said that production totaled 10.5 million barrels of oil equivalent, about five-sixths of which came from petroleum and natural gas liquids. Net losses were down by about 60% from year-ago levels, and even though production was down slightly from the third quarter of 2016, Whiting managed to make considerable progress even with sales of assets that had contributed substantially to production in last year's results. Whiting is still vulnerable to market shifts, but today's move in crude prices above $52 per barrel points to a slow but steady recovery for energy producers.

Finally, shares of Spirit Airlines picked up 7%. The discount airline struggled during the third quarter, with hurricanes dramatically hitting its operations in the Caribbean and along the U.S. Gulf Coast. Yet revenue climbed, and even with its bottom line taking a temporary hit, Spirit was happy that it managed to hold up as well as it did given the magnitude of the storms. Fare wars among major carriers could continue to weigh on Spirit's performance, but the company's management team still sees the opportunity for cost savings that could further bolster results in 2018 and beyond.