There's always money in the enterprise.

Facebook (META -0.76%) has been eyeing the enterprise for a little while now, with its Workplace enterprise collaboration offering representing its first big push. Workplace was first introduced about a year ago hoping to challenge hot start-up Slack, following a year of testing. The social network is pricing Workplace incredibly aggressively in an effort to undercut rivals.

The enterprise push is good news for investors, since there's generally a lot more money in enterprise software than consumer software. Facebook is even bringing on channel partners for distribution. Yesterday, the company provided some updates on where Workplace now stands after a year. 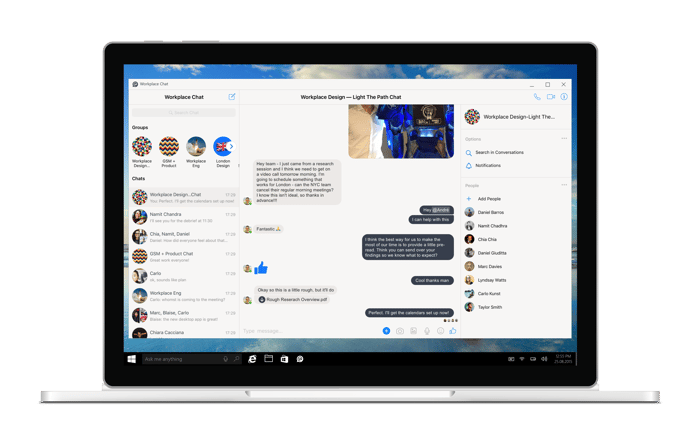 Workplace now has 30,000 organizations on board worldwide, more than double the number of organizations that were using the suite just six months ago. Facebook didn't specify how many enterprise seats or users those organizations represent, or how many of those organizations are non-profits or educational institutions (which get to use Workplace for free). Nonetheless, that progress is still pretty impressive compared to Slack, which announced last month that it had 50,000 paid teams, 2 million paid users, and 6 million daily active users. (Remember not to compare Facebook's 30,000 total organizations directly to Slack's 50,000 paid organizations.)

Facebook is launching a new Workplace Chat desktop app for Microsoft (MSFT 1.07%) Windows PCs and Macs. Having a native desktop app is an important step since the performance and usability will be better than the browser-based web app. The app includes features like video chat, screen sharing, and file sharing, among other things you would expect from an enterprise collaboration app. Most importantly, it includes GIFs.

The existing mobile Workplace apps are also getting some aesthetic updates.

Watch out for the heavyweight

It's hard to talk about enterprise collaboration software without addressing the elephant in the room: Microsoft. The software giant said in September that Microsoft Teams, its own response to Slack's rising popularity, was now being used by 125,000 organizations. Since Microsoft Teams is part of Office 365, all of those organizations are by definition paying customers. There is no free version for consumers, and Microsoft has no intention of offering a free tier.

Facebook Workplace is an important move by the social network, one that has optionality since it wouldn't be a huge deal if Workplace fails. But considering the opportunity to expand into the lucrative enterprise software space, that's a risk worth taking.