The company's core market is shrinking faster than expected, a trend that will continue into 2018.

Nokia (NOK 0.00%) reported its third-quarter results before the market opened on Oct. 26. A steep revenue decline was driven by weakness in the network's business, with a strong performance from the technologies segment unable to pick up the slack. Profits nearly doubled, but the company again lowered its outlook for the full year, citing challenging market conditions and increased competition. Here's what investors need to know about Nokia's third-quarter results. 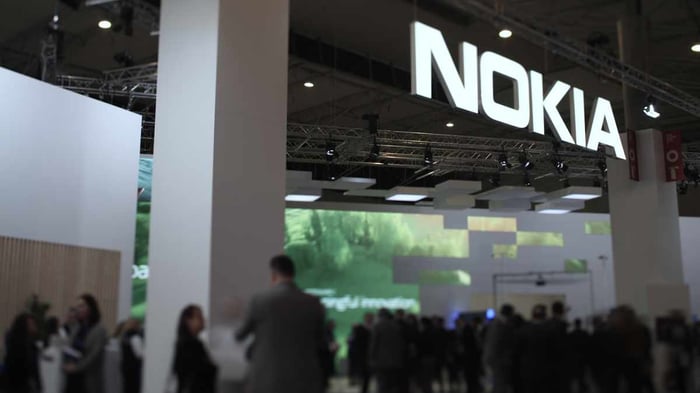 We also saw strength in many parts of our Networks business in the quarter. On the sales side, we saw constant currency year-on-year growth in Global Services and IP Routing as well as our Middle East and Africa, and Asia-Pacific regions. Orders were up in many areas, including Applications & Analytics, which logged its fifth consecutive quarter of order growth in Q3, showing the progress we are making in our strategy to build a strong, stand-alone software business.

Suri described some of the problems facing the business:

In terms of the issues we are facing in Mobile Networks, I have noted in previous quarters that the R&D team in this business group has faced an extraordinarily high workload. Given this situation, we have seen some issues with the time taken to converge some products that have, unfortunately, impacted a small number of customers. As a result, Mobile Networks has experienced both revenue pressure and an increase in expected network equipment swap costs.

While Nokia had a rough third quarter from a revenue perspective, its profit continues to grow at a breakneck pace. That growth rate isn't sustainable, but it provides some evidence that Nokia can maintain its margins even in a difficult market environment.

Nokia's outlook for 2017 worsened slightly, and it expects competition to hurt its results in the fourth quarter. It also expects continued revenue declines in 2018 for its core networks business. But Suri is optimistic that the company is well positioned for the eventual roll-out of 5G networks.