The railroad was still able to post a 10% earnings-per-share gain despite impacts from the weather.

The recent string of hurricanes that hit the U.S. was likely going to have an impact on earnings to a certain degree for just about every company out there. This past quarter, Union Pacific Railway's (UNP 1.63%) earnings were impacted slightly, but the gains it made from increased oil and gas activity across the U.S. more than made up the difference. Here's a look at the company's most recent results. 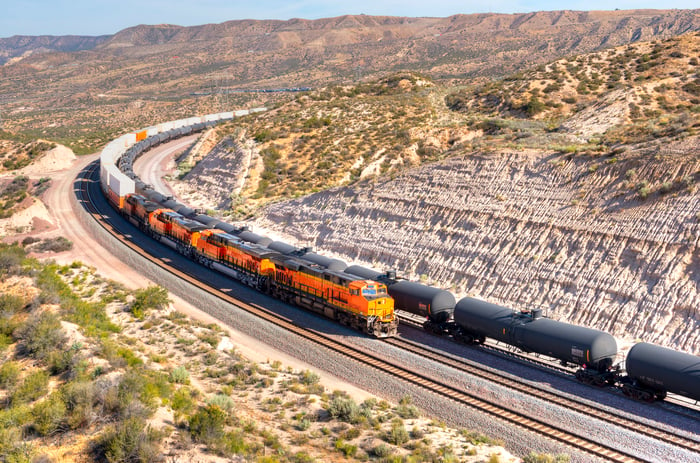 Unless the company had noted that Hurricane Harvey impacted results for the third quarter, it would be hard to notice in the earnings statement. Revenue increased 5% compared to the prior year even though total volumes declined 1%. Its revenue gains came mostly from higher fuel surcharges, raising prices on core services, and a more favorable product mix. The most substantial driver of revenue was its industrial products segment, which saw an 80% year-over-year increase in carloads attributed mainly to moving frack sand for oil and gas producers. All of this additional frack sand has been a boon for railroads with exposure to the Western half of the U.S. 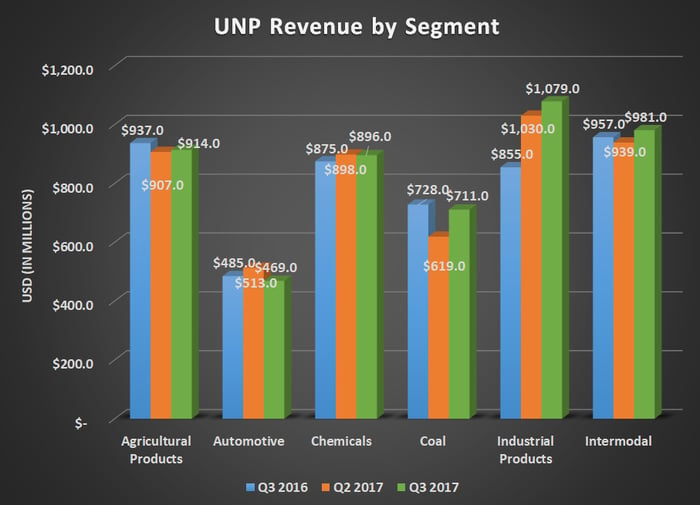 Even with the higher operating costs, the company was still able to post better net income results and a 10.2% increase in earnings per share. That double-digit earnings-per-share gain came in no small part from the company's share repurchase program, which has so far repurchased $2.8 billion in stock in 2017 and reduced overall share count by 4.1% year over year.

Here's CEO Lance Fritz on the company's plans for the coming years.

As the economy continues to ebb and flow, we will focus on executing our value strategy. We will use innovation to enhance our customer experience while continuing to drive resource productivity throughout the organization as we progress our G55 + 0 initiatives.

That "G55 + 0 initiatives" refers to the company's objective to get its operating ratio down to 55% while maintaining a zero incident rate. As railroads cut costs and try to lower their operating ratios -- the lower the number, the more efficient the operation -- the risk is that they will incur a greater risk of incidents. Getting to a 55% ratio is an ambitious plan and would make Union Pacific the most efficient American railroad company by a wide margin, but this isn't a pie-in-the-sky number, either. The two Canadian railroad companies, Canadian National and Canadian Pacific, currently have operating ratios in the mid-50s. 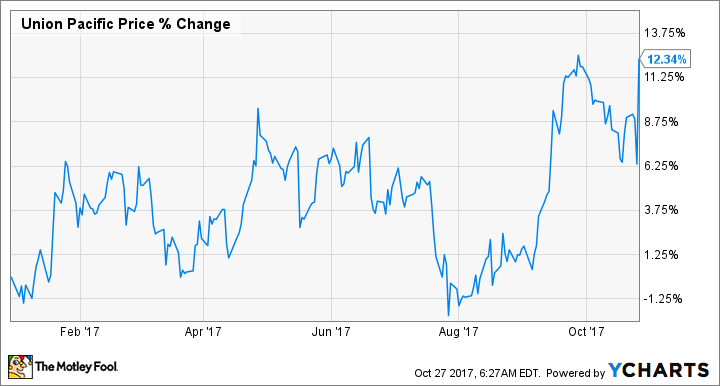 It's hard to find much fault in Union Pacific's most recent results. Even with the impact of Hurricane Harvey, the company produced double-digit net income gains. Even railroads that didn't feel the ill effects would like to produce those kinds of results. Having revenue coming from so many different sources means one segment can cover for weakness in others, as we saw this past quarter. Measured gains in revenue coupled with small improvements in operating ratio and its share repurchasing program should go a long way in enabling Union Pacific to post results like this for a while.