Please ensure Javascript is enabled for purposes of website accessibility
Log In Help Join The Motley Fool
Free Article Join Over 1 Million Premium Members And Get More In-Depth Stock Guidance and Research
By Jeremy Bowman - Oct 28, 2017 at 10:31AM

A new CEO and a massive divestiture could lead to comebacks for these two stocks.

Buying beaten-down stocks may take more gumption than the average investing method, but when you hit you can hit big.

Priceline Group (BKNG 1.09%) languished for several years after the dot-com bubble burst, but thanks to a smart acquisition strategy the stock eventually surged and has now returned nearly 30,000% since hitting its all-time low in October 2002.

Netflix (NFLX 2.90%) stock plunged after the so-called Qwikster debacle in 2011, when the company attempted to separate its DVD-by-mail and streaming services. Investors doubted its ability to recover, but its streaming service has since become dominant, and the stock is up almost 2,000% over the last five years.

More recently, SodaStream International (SODA) shares have gained almost 400% since early 2016 as the company has successfully transitioned from a soda-maker to a sparkling-water brand.

Of course, not all zombie stocks will come back from the dead. But for investors looking to make a big return on a stock that's fallen significantly, the two below present appealing options. 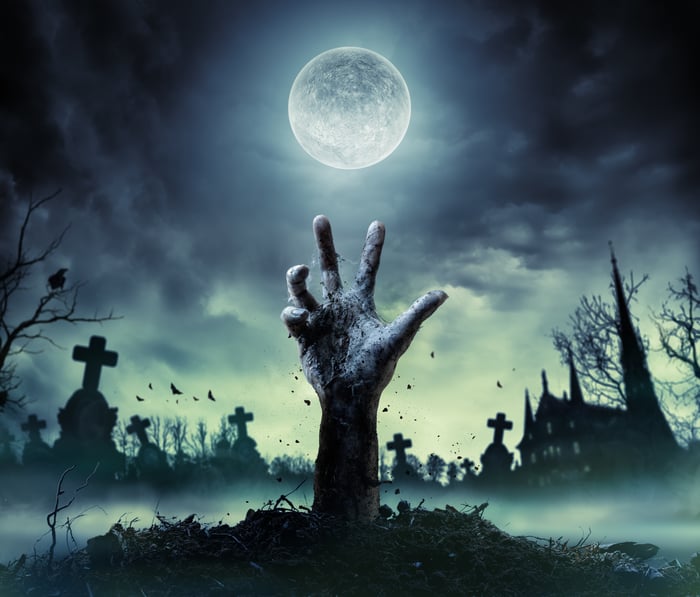 A drugstore chain in transition

Rite Aid (RAD 1.63%) stock has plunged a whopping 78% this year. Investors turned away from the stock after the Federal Trade Commission indicated it would block Walgreen Boots Alliance's (WBA 1.74%) planned acquisition of Rite Aid for $9/share in January.

The stock lost 31% over that month and continued to drop afterwards as the FTC chipped away at subsequent iterations of the deal. In the end, Rite Aid agreed to sell 1,932 stores, or nearly half of its total, to Walgreen for $4.375 billion, in addition to a $325 million breakup fee. Rite Aid needed this deal, as it's suffering under a debt burden of $7 billion; it will use the bulk of the proceeds to pay down debt. That should help alleviate an annual interest expense of over $400 million, which in turn should boost profits.

In addition, the 2,600 stores Rite Aid is holding onto are mostly better-performing than the ones it's selling, and it will spend some of those proceeds on renovations. Rite Aid will also gain the ability to purchase generic drugs through a Walgreen affiliate at a cost substantially equal to Walgreen's for the next 10 years, which should also help shore up its margins.

Investors haven't yet bought into the turnaround story as the stock is now trading near a four-year low, but performance should improve once the deal closes in the spring of next year. With shares having dropped to below $2, the bar for a recovery is low.

A new CEO could be the answer

It may be hard to call a $200 billion-dollar company a zombie, but General Electric (GE -0.20%) shares touched four-year lows after new CEO John Flannery slashed guidance and said the company may even cut its treasured dividend after reporting third-quarter earnings.

While that news was jarring to investors, sending the stock down as much as 6%, Flannery's prescription may just be the bitter medicine that investors need, especially coming after profligate spending under former CEO Jeffery Immelt, who destroyed billions in shareholder value at the helm. Reports emerged after his departure in August that Immelt would have an empty jet follow his own private jet on trips in case his plane experienced mechanical problems.

Flannery promised to sell $20 billion worth of GE businesses, about 10% of the company at its present market value, and said, "Everything is on the table" in the earnings call. He's also scaling back on lavish corporate perks that were de rigueur in the Immelt era, such as a three-day annual Florida retreat filled with sunshine, fishing, and golf. Those decisions will cut back on costs, and could bring a much-needed cultural change to the company.

Flannery's attitude and approach to the turnaround look like a breath of fresh air, and, if successful, will bring GE stock out of its long-lasting slumber.

When on the hunt for zombie stocks like the ones listed above, it's important to look for a catalyst to spark a comeback. For Rite Aid and GE, a huge asset sale and a new CEO could be just the thing to help these stocks bounce back.