Like much of the sports and outdoor retail sector, Sportsman's Warehouse (NASDAQ:SPWH) has had a rough 2017.

Shares are down over 55% year to date, but the company is still expanding rapidly, adding eight stores through the first half of the year to bring its grand total to 83 across 22 states. Management plans to continue adding new locations aggressively, with a goal of increasing its square footage by 10% annually for the next several years.

With the stock's sell-off this year, shares now trade at a bargain according to conventional metrics, with price-to-earnings at just over 6x. Is it time for investors to jump back into Sportsman's Warehouse? Let's see what's in store for the outdoor chain. 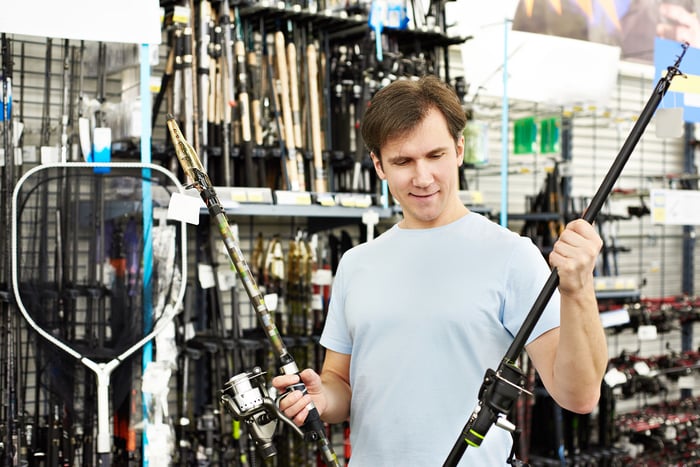 Sportsman's Warehouse specializes in outdoor sporting goods such as camping, fishing, and hunting, and it sells gear like firearms, clothing, and footwear to outfit such activities. Last year, revenue increased 10.3% to $780 million, and earnings per share improved from $0.66 to $0.70. However, comparable sales, a sign of underlying strength as it strips out the effect of new store opening, fell modestly, down 0.8%.

The company considers its brand name and leadership in outdoor retail in the western U.S., where it has three times as many stores as its closest rival, to be among its strengths. It also values its real estate strategy, focusing on small to medium markets with low-cost operating structures and attractive unit economics. The company says it targets a 50% pre-tax return on invested capital within the first year of opening.

Unlike most retailers, Sportsman's Warehouse is somewhat protected from e-commerce competition, as it derives 33% of its sales from firearms and related products with regulations that limit their availability online. It considers Bass Pro Shops to be its closest major competitor, though it also competes with Dick's Sporting Goods, Wal-Mart, Target, and Amazon.

Where it stands today

Sportsman's Warehouse's most recent quarterly report shows why the stock has tumbled this year. Same-store sales have fallen 8% through the first half of fiscal 2017, with management having anticipated softness in firearms sales as it lapped the Orlando tragedy in June 2016.

Earnings per share have also dropped sharply through the first half of the year, from $0.20 to $0.05. The second half is seasonally stronger for the retailer, however, as the company benefits from the fall hunting season and holiday spending. Management's full-year guidance called for same-store sales to decline 5% to 6% and earnings per share of $0.60 to $0.66, down from $0.70 a year ago.

Sportsman's Warehouse's strength in firearms gives it some insulation from the upheaval in the retail industry, but as the stock's performance this year shows, nearly every brick-and-mortar retailer is at risk. The outdoor and sporting goods sector has certainly shown cracks in recent years, as a number of competitors declared bankruptcy, including Gander Mountain, which has a similar profile to Sportsman's Warehouse. The recent merger between Cabela's and Bass Pro Shops also seems to reflect industry weakness, as sluggish demand often brings consolidation. Shares of Dick's Sporting Goods, the country's largest sporting goods retailer, are down over 50% this year as well -- management has slashed guidance multiple times.

Sportsman's Warehouse is well managed, and company leadership has done a good job with accurately predicting sales trends in its guidance, but the bull thesis for the stock seems to mostly rely on management's expansion plan. If same-store sales and profits continue to decline, it will be hard to justify opening stores at such a rapid clip.

Cheap stocks like Sportsman's Warehouse are often volatile, and shares could easily pop on a strong earnings report, when the company delivers third-quarter results in November, but the headwinds facing the company from e-commerce and the broader retail malaise should continue to threaten it in the long term.

Investors interested in Sportsman's Warehouse may want to instead consider buying one of the company's suppliers, including gunmakers such as Sturm, Ruger, American Outdoor Brands, or Johnson Brands, the maker of fishing and boating equipment whose shares have nearly doubled this year.

Since these manufacturers have strong brand names, consumers will seek them out through a variety of sales channels. That means they have the potential to outperform retailers themselves during periods of industry upheaval.