Following a spectacular 2016 in which its stock price surged 50%, Dick's Sporting Goods (NYSE:DKS) shares have reversed course this year. To date, they've lost nearly half their value as the retailer struggles to adapt to changing consumer preferences and intensifying competition from businesses that also happen to be its most important suppliers.

Unfortunately, the sell-off in Dick's stock may not be over. Here are five reasons why.

1. Key suppliers are going directly to the customer

Nike (NYSE:NKE) is Dick's No. 1 vendor, making up approximately 20% of the sporting goods retailer's 2016 merchandise purchases. Yet while its wholesale segment remains an important part of its business, Nike is investing heavily in its direct-to-consumer operations. That doesn't bode well for Dick's, because Nike's DTC sales bypass the retailer altogether.

There are two main aspects to Nike's DTC business: its Nike-owned retail stores and its e-commerce operations. Together, Nike's stores and websites generated $9.1 billion in revenue in fiscal 2017 -- or 28% of Nike brand sales -- and accounted for 70% of the company's growth. These sales are also more profitable than Nike's wholesale segment, which gives the apparel titan a strong incentive to grow this aspect of its business.

Dick's No. 2 vendor, Under Armour (NYSE:UA) (NYSE:UAA), has a similar goal. Nike's rival is intent on significantly growing its substantial direct-to-consumer business in the years ahead. In fact, CEO Kevin Plank has said, "I don't know if anyone can imagine that they can put enough money toward their digital businesses today."

Although it's relatively small compared to Nike's at $1.5 billion, Under Armour's DTC business accounted for 35% of its total revenue in the second quarter, up from 31% in 2016. That figure should continue to rise in the coming years as Plank prioritizes Under Armour's direct-to-consumer growth.

2. Nike cozies up with Amazon

In addition to building its own DTC business, Nike also recently inked a deal with Amazon (NASDAQ:AMZN) to sell its wares on the e-commerce giant's website. This deal highlights what is perhaps the biggest threat to Dick's business: the disruption of traditional brick-and-mortar retailers by online rivals. The more ways people have to conveniently buy sporting goods online -- and no one does convenient online shopping better than Amazon -- the fewer reasons they have to step foot inside one of Dick's stores.

This onslaught of online competition is denting Dick's profit margins, which have fallen sharply in recent years: 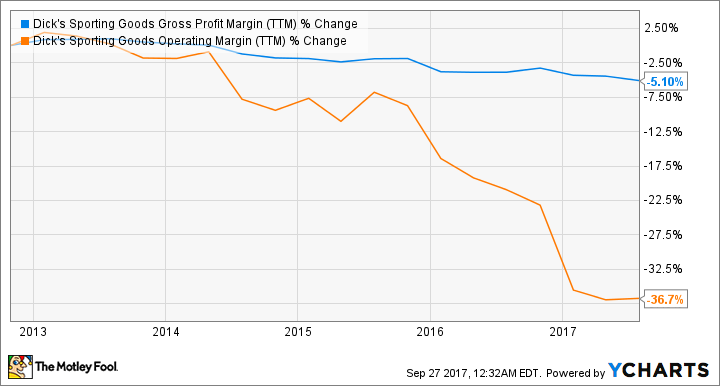 The rise of e-commerce is also pressuring Dick's same-store sales, which have been deteriorating since the end of last year:

As my colleague Brian Withers explains, this is despite the fact that Dick's includes revenue from its website in its same-store sales numbers. If Dick's were to exclude e-commerce sales from this metric, the performance of its stores would look far worse.

Even in the face of its weakening store-level results, Dick's continues to expand its store count. The company opened 13 new Dick's Sporting Goods stores in the second quarter. It plans to open 15 more in the third quarter, and a total of 43 in 2017.

Dick's has said that it plans to slow its store-count expansion in 2018. But as its stores appear to be entering a period of declining sales and profits, shareholders should consider whether their capital could be better used for other purposes, such as strengthening the company's e-commerce operations.

5. Cheap can get cheaper

The core argument of Dick's Sporting Goods bulls is that these concerns are already reflected in its stock price, which is currently about 9.5 times analysts' estimates for fiscal 2018. Thus, they argue, a low valuation makes Dick's shares attractive.

Yet if the challenges mentioned above cause Dick's to slash its guidance, as it did in the second quarter, it's possible that its shares may turn out to be far more expensive than they currently appear. That's the problem with investing in businesses facing disruption: Their seemingly cheap stocks can become a lot cheaper -- all the way up until the business enters bankruptcy. Although Dick's is still far from such a fate, investors may wish to steer clear of its stock all the same.