Shares of Dick's Sporting Goods (NYSE:DKS) were running out of breath Tuesday after the retailer posted underwhelming results and lowered its guidance in its second-quarter earnings report. The stock was down 18.5% as of 11:22 a.m. EDT.

Overall revenue, meanwhile, increased 9.6% to $2.157 billion as total store count increased by 12% over the past year to 833, and online sales improved 19%. The top-line result was slightly below estimates at $2.161 billion. 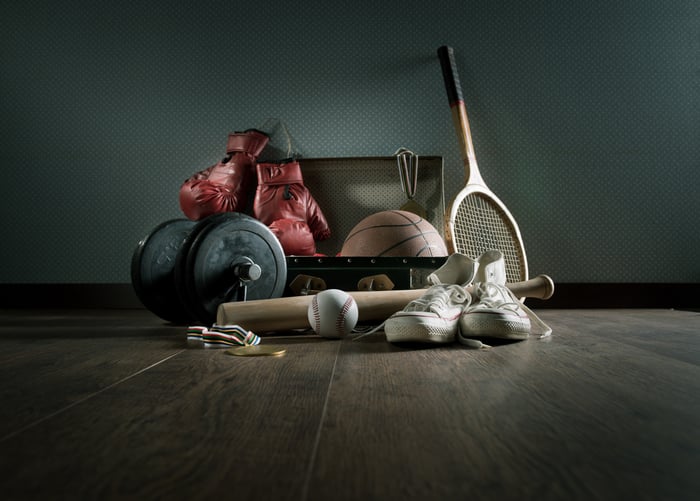 The news weighed on peers like Foot Locker and suppliers including Nike and Under Armour, whose stocks were all down 2% or more at one point on Tuesday. That's a sign that investors see ongoing weakness in the sector, which Dick's CEO Edward Stack confirmed by calling the current environment, "A very competitive and dynamic marketplace." He also noted that the company "continued to capture market share, but sales were pressured by weakness in hunting, licensed, and athletic apparel." The company, he said, plans be more aggressive with promotions over the remainder of the year to defend its market share.

As a sign of its expected promotional efforts to continue gaining market share, Dick's lowered its full-year EPS guidance significantly. It now expects an adjusted per-share profit of $2.80 to $3, down from a previous range of $3.65 to $3.75. It also lowered its comparable sales outlook from 1% to 3% growth for the year to flat to a low-single-digit decline.

Given its decision to slash guidance, Tuesday's slide is not surprising. While Dick's shares are cheap, the stock looks like a value trap as long as profits are falling.