Sneaker and sport apparel manufacturer, Nike (NYSE:NKE), grew its direct-to-consumer (DTC) channel eight times faster than its wholesale business last year. While this channel only generated $9.1 billion of revenue, or 28% of Nike brand sales for the company in fiscal 2017, it accounted for 70% of the growth.

Investors should understand how Nike's company-owned stores, digital commerce platform, and international locations are all playing a part in this exciting, and increasingly important, part of the company. 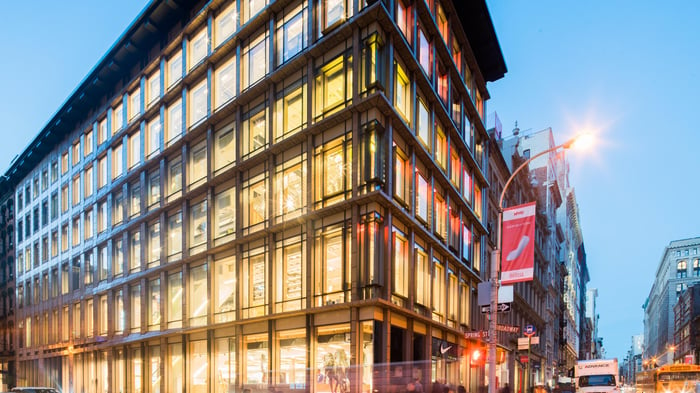 Direct to consumer is more important than ever

As you can see from the chart below, DTC growth is powering results for the overall company, despite its minority share of the top line. 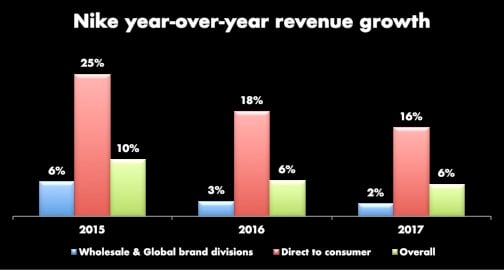 In the most recent earnings call, CFO Andy Campion emphasized the importance of the direct channel by saying it was "more productive and profitable than other less differentiated consumer experiences."

The DTC business is both fast growing and high margin -- a strong combination. Next up, let's peel back the onion and look specifically at company-owned stores, which account for the bulk of revenue in this channel.

At the end of fiscal 2017, the company had 243 Nike brand and in-line stores in the U.S. with another 713 in non-U.S. locations. These 956 stores racked up an impressive $6.9 billion in sales last year and put up solid same-store sales performance, too. Recall that same-store sales compare stores that have been open for more than a year and have not changed significantly in size nor been permanently relocated in the past year. 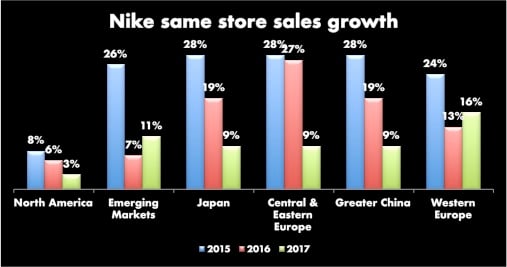 While growth has been decelerating across the globe, the numbers outside the U.S. remain robust. All regions outside the U.S. enjoyed currency-neutral growth of 9% or more, which is especially impressive since Nike doesn't include its digital sales as part of these numbers.

The company also uses these stores to highlight its brand. For example, the New York Soho district store is an impressive five-story showroom, complete with a half-court basketball court to allow customers to perform real-world product testing.

And while company-owned stores make up the biggest component of DTC revenue, the digital channel is growing even faster.

Nike includes sales from its 45 e-commerce websites and its Nike+ and Nike+ SNKRS apps as part of its digital commerce sales. This subset of the DTC channel has almost doubled in the last three years to $2.2 billion in 2017, with 30% growth in the most recent fiscal year. During the latest earnings call, Campion highlighted how e-commerce helps the top and bottom lines.

[...] fulfilling demand through NIKE.com generates nearly twice the revenue and significantly higher margin on each transaction and over time, we see the growth of digital as accretive to NIKE's bottom-line profitability.

While the company doesn't break out its digital business in any more detail than a total revenue number, it certainly is an important growth driver, along with international DTC sales.

International is the future

International sales make up more than half of total DTC revenue, coming in at $4.6 billion for fiscal 2017. Every single one of the company's international regions grew faster than North America, and by a wide margin. The DTC business in every region also grew several times faster than its corresponding wholesale business. 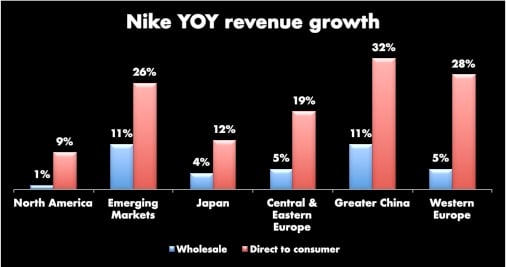 To highlight the size of this international presence, Nike's direct business in China is equal to Under Armour's entire global DTC operation at $1.5 billion when you compare the two company's most recent fiscal-year numbers.

There's no denying that Nike is still dependent on its wholesale partners, as they accounted for 72% of Nike Brand revenue last year. But its direct to consumer business is growing faster than wholesale, no matter how it's measured, while contributing more to the bottom line. It's no wonder that the company is looking to press the accelerator on the DTC channel. Investors should watch this part of the company closely if they want a clear vision of future growth at Nike.