Please ensure Javascript is enabled for purposes of website accessibility
Log In Help Join The Motley Fool
Free Article Join Over 1 Million Premium Members And Get More In-Depth Stock Guidance and Research
By Tyler Crowe - Oct 30, 2017 at 7:33AM

It's not that often that all three of Exxon's businesses produce decent results.

Something good is brewing in the oil and gas market, and you can see it in ExxonMobil's (XOM 0.87%) most recent earnings result. Even though commodity prices are up slightly and the company's production hasn't changed much, earnings continue to improve as management implements cost cuts across the business.

That certainly helps today, but long-term investors should be much more excited about the next several years as the company continues to find new, low-cost oil sources that should ensure better results down the road. Let's look at Exxon's most recent results, as well as some of the new deals the company inked this past quarter. 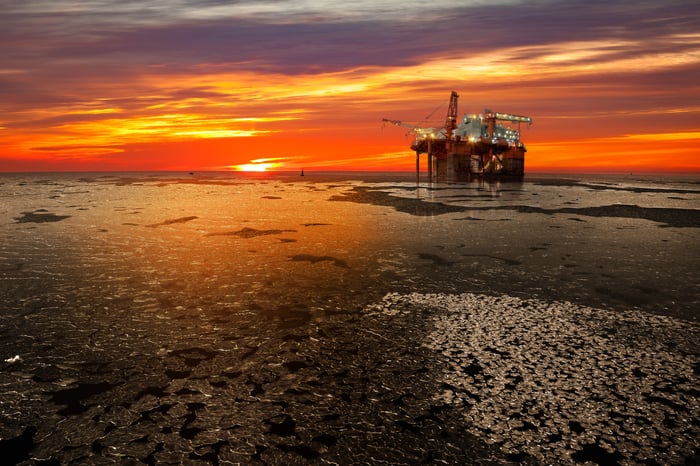 Perhaps the most encouraging aspect of ExxonMobil's most recent earnings release is that just about every business segment performed relatively well. Higher oil and gas prices led to a vastly improved upstream performance, while refining margins improved and chemical margins remained rather strong. Also, those results don't include the petrochemical facility ExxonMobil purchased last quarter, so we can expect those results to improve considerably in the next quarter.

The one region where ExxonMobil's results leave something to be desired is with its U.S. upstream business, which continues to produce losses. This past quarter, that loss narrowed to $238 million, but that's more than two years of negative results. Investors can hope that the company will be able to use its Permian Basin production to start offsetting losses from legacy assets. 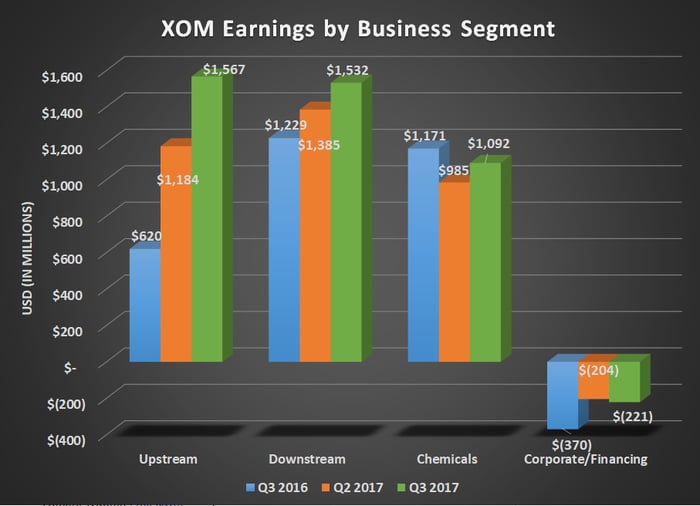 The recurring theme that Wall Street keeps returning to with ExxonMobil and other integrated majors is the lack of cash flow to cover capital spending and dividends. As part of his prepared remarks, Executive Vice President Jeff Woodbury went out of his way to highlight that this is becoming less and less of an issue for Exxon.

As shown, year-to-date 2017 cash flow from operations and asset sales of $24.4 billion funded shareholder distributions, net investments in the business, and a reduction in debt.

In addition, we continue to generate free cash flow while selectively investing in the business and maintaining capital discipline. This quarter marks the fourth consecutive quarter where free cash flow has exceeded distributions to our shareholders since the significant drop in oil prices.

The rumors of ExxonMobil's demise seem greatly exaggerated. The company's most recent results show that it can more than handle itself in a low-crude-oil-price environment without having to go to more drastic measures such as cutting its dividend or shedding assets to merely raise cash.

Management said it doesn't intend to buy back stock for at least the rest of 2017. Part of that has to do with some extra cash payments going out the door in the fourth quarter, and it wouldn't be surprising if the company elects to reduce its debt load more before getting back to repurchases. Overall, though, the company looks to be handling the current market, and an uptick in commodity prices will do this company well.