Please ensure Javascript is enabled for purposes of website accessibility
Log In Help Join The Motley Fool
Free Article Join Over 1 Million Premium Members And Get More In-Depth Stock Guidance and Research
By Adam Levine-Weinberg - Oct 30, 2017 at 7:10AM

GM stock has surged over the past year. Nevertheless, it remains one of the cheapest stocks out there.

Last Tuesday, General Motors (GM 1.35%) posted another strong quarterly profit. While GM's profit fell significantly on a year-over-year basis -- even excluding charges related to the sale of its European operations -- the company still posted adjusted earnings per share of $1.32, which was $0.20 ahead of the average analyst estimate.

GM stock rose on Tuesday, following the favorable earnings report. However, it gave back all of its gains and then some over the next three days, after a widely followed auto analyst cut his rating on the stock, saying it had risen too far. Yet GM stock remains quite cheap, and the company has meaningful opportunities to further improve its earnings in the years ahead. This suggests that the stock has plenty of potential to continue rising.

Last quarter, General Motors had to cut output 26% year over year in its core North American market. This cut included planned downtime related to future product launches, lower production of slow-selling passenger cars to facilitate an inventory correction, and (to some extent) the impact of a strike at the Canadian plant that builds the popular Chevy Equinox crossover. GM had to reduce its production significantly in the third quarter. Image source: General Motors.

In years past, a production cut of this magnitude would have wiped out GM's profit. Instead, the company managed to squeeze out an adjusted operating margin of 8.3% in North America. While GM North America had achieved a spectacular 11.5% adjusted operating margin a year earlier, the Q3 2017 performance proves that the General will be able to withstand a future sales slowdown.

GM's other business segments all reported year-over-year earnings growth for the third quarter, which helped cushion the blow from lower earnings in North America. Furthermore, adjusted operating profit is down less than 5% year to date for GM's continuing operations -- and the outlook for the fourth quarter is solid.

Even though General Motors posted solid results in the face of lower North American production last quarter, auto analyst Adam Jonas cut his rating on GM stock on the day after the earnings report. With the stock having surged by about 50% in the past year, Jonas now gives it the equivalent of a "neutral" rating, with a $43 price target, slightly below GM's current stock price. 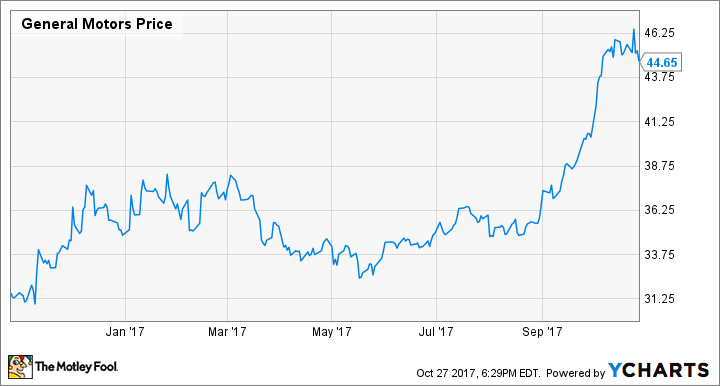 During GM's earnings call last week, Jonas asked CEO Mary Barra whether the company might spin off or otherwise separate out its emerging self-driving car or ride-hailing businesses from the legacy auto business. Part of his relative disappointment with GM may stem from Barra's response: She indicated that GM plans to hold on to those businesses for the foreseeable future.

Plenty of opportunities in the core business

Fortunately for General Motors shareholders, the company still has room to grow EPS in the next few years, even if the domestic auto cycle has already peaked.

Most importantly, GM will roll out a new full-size truck architecture next year. Converting its various pickup and full-size SUV models to this platform over the next couple of years should provide a big profit boost for GM, most of which will come in 2019. The company's ongoing transition to a portfolio of new crossover models should also support strong profitability in North America during 2018 and 2019.

Outside North America, GM will see meaningful benefits next year from exiting unprofitable markets. In the following years, its long-awaited "GEM" platform will start to provide significant cost savings by serving as a universal vehicle architecture for emerging markets.

General Motors is also on track to benefit from the growth of its lending business, GM Financial, in the coming years. Meanwhile, it is buying back GM stock at a rapid clip and paying a generous dividend. If the company manages to successfully execute on its plans for the next few years, there could be plenty of upside left for GM stock.