However, one thing is clearly moving in the wrong direction: Amazon's free cash flow. Amazon reports three separate free cash flow numbers, and all three were down substantially compared to the same point last year. The third and most meaningful of the three, free cash flow less finance lease principal repayments and assets acquired under capital leases, turned negative on a trailing-12-month basis. Chalk that up to the company's prolific spending. 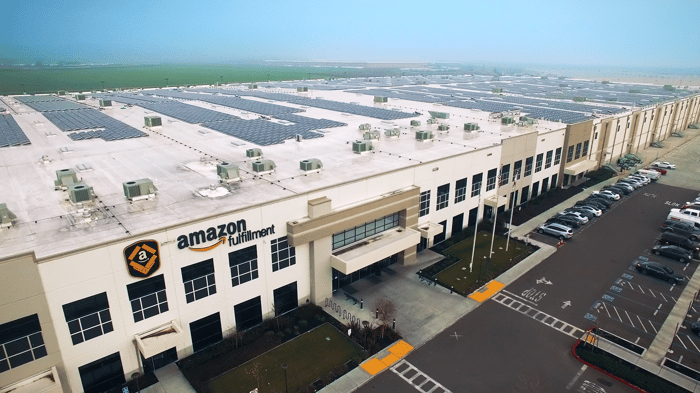 A tale of three cash flows

Amazon has long reported impressive free cash flow numbers, but as I discussed a few years ago, its standard free cash flow metric is grossly inflated. Amazon acquires billions of dollars of assets each year via capital leases. Amazon doesn't pay cash for these assets up front, instead paying over time. However, assets acquired through capital leases are put on the balance sheet and depreciated. That depreciation is added back when calculating operating cash flow, but the cost of those assets is not treated as a capital expenditure.

That's why there's such an enormous difference between Amazon's free cash flow numbers:

That last number treats assets acquired under capital leases as if they were normal capital expenditures. If you want a complete picture of how much Amazon is investing in its business, from warehouses to data centers and everything in between, that's the number to look at.

All three of these free cash flow metrics are in decline, with that last number suffering the most striking drop over the past year: 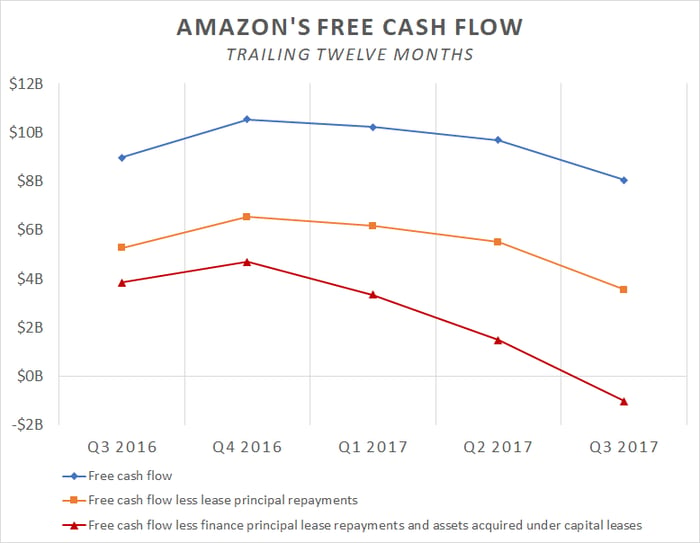 This says two things. First, Amazon has ramped up its spending significantly. Trailing-12-month capital expenditures, including assets acquired under capital leases, now sits at $17.9 billion. That's up from $11 billion one year ago.

Second, cash is no longer coming in fast enough to fully offset that spending. The third TTM free cash flow metric has dropped by nearly $5 billion over the past year, moving from positive territory deep into negative territory.

This is business as usual for Amazon. The company is throwing a lot of money into a lot of stuff, including its core e-commerce business, Amazon Web Services, content spending for its Prime members, its family of devices, and now brick-and-mortar stores following its acquisition of Whole Foods. Investors don't seem to mind as the stock up about 250% since the beginning of 2015.

How long can Amazon keep plowing cash into its empire, producing little in the way of profits or real free cash flow? As long as investors will allow it. Given the reaction to Amazon's third-quarter report, the party doesn't look like it will end any time soon.