Please ensure Javascript is enabled for purposes of website accessibility
Log In Help Join The Motley Fool
Free Article Join Over 1 Million Premium Members And Get More In-Depth Stock Guidance and Research
By Lee Samaha - Oct 30, 2017 at 8:04AM

Rockwell Automation stock's strong run can continue provided the company can perform in these three areas.

Rockwell Automation (ROK 1.96%) is well known as a backdoor way to play growth in the industrial internet of things (IIOT). However, its 50% stock-price surge in the past year is probably more a matter of having its string of earnings upgrades come largely from improving capital spending trends in industrial automation.

The company heads into its fourth-quarter earnings on Nov. 8 with a lot of momentum, but given its high valuation on a current and forward basis, management probably needs to demonstrate its strong run can continue. In this context, let's look at the three things to focus on in the results presentations. 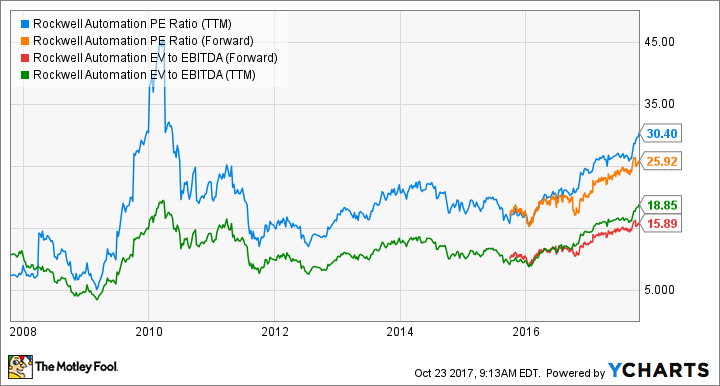 Rockwell's improvements in its end markets have led to margin expansion alongside better free cash flow conversion. Here's a look at full-year 2017 guidance for context.

Simply put, the key to Rockwell's prospects is sales growth, so let's focus on three areas of its sales performance.

The country's better-than-expected GDP growth has helped growth prospects for a wide range of industrial companies in 2017, and Rockwell is no different. In fact, a look at its organic growth by region shows just how strongly the Asia-Pacific region has grown. In addition, U.S. growth has markedly improved in line with the recovery in U.S. industrial production this year. I'll discuss Europe in more detail in a moment. 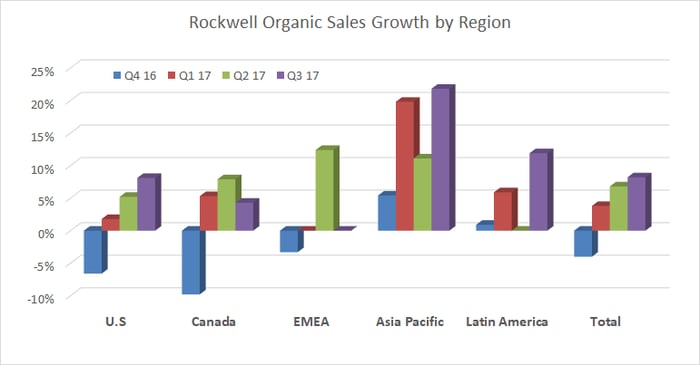 Although the Asia-Pacific region has contributed less than 14% of revenue so far this year,  it's contributed more than a third of total sales growth, with the U.S., accounting for 55% of total revenue, being the other big contributor, with 45% of growth.

In short, investors should keep a close eye on Rockwell's sales figures in China and the Asia-Pacific region, because any kind of GDP slowdown could hurt Rockwell's growth prospects. 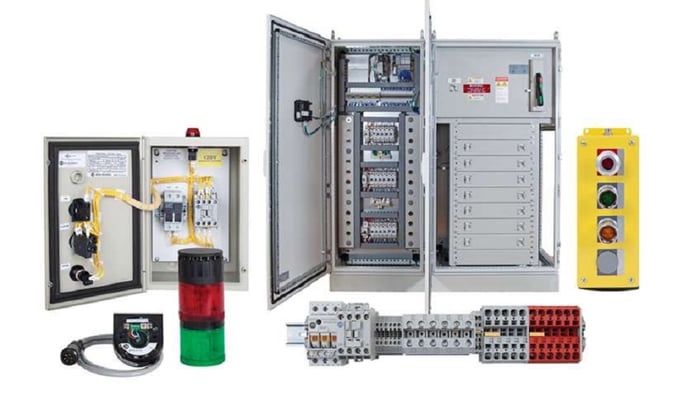 Organic sales growth in Europe, the Middle East, and Africa (EMEA) was slightly negative in the third quarter, and management's commentary on what happened raises as many questions as answers. On the earnings call, CEO Blake Moret talked of how "the timing of projects is driving some quarter-to-quarter variability." When quizzed further, he referred to "customer-specific" variability, with its traditional customers purchasing "a little bit less." CFO Patrick Goris claimed the growth in EMEA "came in as we expected" and reiterated the argument that it was due to project variability.

While management's reassurances sound good, Rockwell will have to deliver in the fourth quarter in Europe. It's a particular concern, because Rockwell competes fiercely in industrial automation with German company Siemens AG (SIEGY -3.69%), bearing in mind Rockwell's discontinuation of its traditional programmable logic controller (PLC), the PLC-5, in favor of migrating customers onto its newer ControlLogix PLC.

Essentially, the PLC controls manufacturing processes and assembly lines, so it's an integral part of Rockwell's offerings. Whenever a company discontinues an existing product, there's the possibility of some sales disruption, and it's possible that Siemens is gaining ground on Rockwell in Europe.

Rockwell's third-quarter earnings were boosted by strong growth in transportation, with automotive-related sales up a whopping 20%. The question is whether it can continue with global automotive production growth starting to slow, particularly in the United States.

On the third-quarter earnings call, Moret admitted that "over time," reduced automotive sales would affect Rockwell,  but he also discussed the possibility that Rockwell could still do well given its exposure to spending on IIOT solutions and from a favorable customer mix.

It's far from clear what the impact of a slowing auto industry will have on industrial companies with significant exposure, but recall that merely a slowing of Rockwell's growth rate could pressure the stock.

Rockwell's stock has been on a fantastic run in 2017, but the focus now shifts to organic sales guidance for its financial 2018, and how the company exits the fourth quarter is obviously the key to its prospects. Management will need to demonstrate that it can grow sales at a similar clip to this year's 6% organic growth target in the face of a slowing auto market and the possibility of slower growth in China. Meanwhile, competition with Siemens, particularly in Europe, needs to be watched closely.