The good news: Most are completely within your control.

What personal-finance issue keeps you awake at night? Are you worried about not having enough retirement savings, or something more immediate, like losing your job? Chances are good that many other Americans feel the same way as you do.

With that in mind, here are Americans' top five financial fears, according to WalletHub's 2017 Halloween Spending and Financial Fear survey, and what you can do to set your mind at ease. 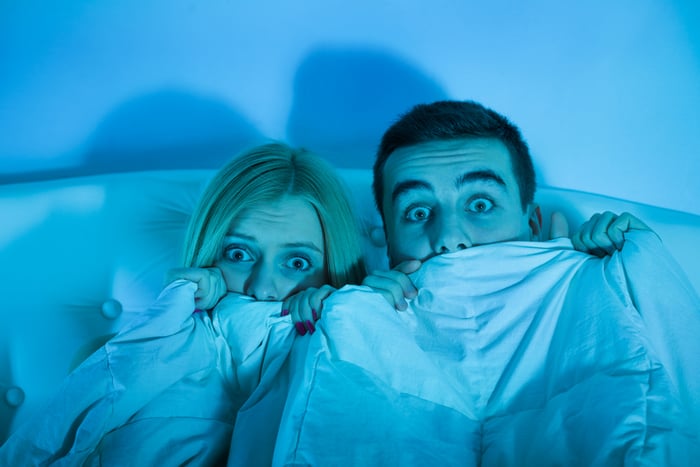 According to WalletHub's survey, which asked over 530 Americans what financial topics frighten them the most, these were the top five responses:

Now, some financial challenges -- specifically, job loss -- aren't totally in your control. For instance, you can't always foresee a layoff coming or prevent one from occurring. However, most of these fears can be prepared for. Here are some statistics that show why Americans may fear these things, and what you can do about it if you're worried about them.

It's easy to understand why an unplanned emergency is at the top of the list of Americans' financial fears. According to a Bankrate survey, nearly six in 10 Americans couldn't cover an unexpected $500 expense without selling something or borrowing the money.

Experts generally suggest that an ideal emergency fund contains about six months' worth of living expenses in a readily accessible place like a savings account. While this may seem like a daunting task, you don't need to get there right away. If you get paid biweekly and can set aside just $50 per paycheck, you'll have an emergency cushion of $1,000, putting you in better shape than most Americans.

Better yet, automate the process. Even if you can't spare much out of each paycheck, set up an automatic transfer so that you never even see the money and it goes straight into your emergency savings account. You may be surprised at how quickly your savings builds up.

This is another legitimate fear. The average American's retirement savings is $95,776, according to the Economic Policy Institute. For pre-retirees (56-61 years old), the average is $163,577. This may sound like a large amount of money, and it is in an immediate sense, but not in terms of a nest egg that will need to last the rest of your life.

So how much will you really need? It depends on a few factors. Experts generally suggest that you'll need about 80% of your pre-retirement income to sustain your lifestyle, and the average person can expect about half of this to come from Social Security. For a rough calculation of your retirement number, try this quick exercise:

If you've fallen behind, now could be a smart time to increase your 401(k) contributions or start contributing to an IRA. Your investment dollars will never have more long-term compounding power than they do right now, so the sooner you act, the better off you'll be.

This is a broad term and could mean a number of things. Identity theft is one concerning form of fraud that can wreak havoc on your financial life, and it's an especially alarming possibility in the wake of the recent Equifax data breach. But there are steps you can take to protect yourself from identity theft if you're worried about it, such as freezing your credit and regularly monitoring your credit reports.

Tax fraud is another major worry for many Americans, and it comes in several forms. It can take the form of a fraudulent tax return filed in your name to claim a bogus tax refund, or it can refer to a tax collection scam whereby a criminal impersonates the IRS to collect money you don't owe. Tax fraud can generally be avoided by filing your return promptly at the beginning of the year, and by knowing what the IRS will and will not do to collect a legitimate tax debt.

It's no surprise that this was low on the list. The average American has a FICO credit score of 700, well into the realm of "good credit."

There's no magic formula to achieving good credit. By paying your bills on time, keeping your credit card balances low, and only applying for credit when you truly need it, it isn't too difficult to get good credit.

If you already have poor credit and need to do some damage control, be sure to check out some of my colleague Jordan Wathen's suggestions that can help speed up the process of repairing your credit.

The bottom line is that millions of Americans do have legitimate reasons to be concerned about these personal-finance topics, but many of the fears can be conquered with some smart financial moves. For example, if you need to build up emergency savings, try implementing an automated savings method, as I described. Or if you're worried about retirement savings, try increasing your 401(k) contributions by 1% or 2% of your salary. You may be surprised at the long-term effect that seemingly small changes can have.