I have to imagine that anyone invested in Boardwalk Pipeline Partners (NYSE:BWP) feels like the wait for a distribution increase has been akin to watching paint dry. The company's progress over the past several years to improve its debt metrics and build out some major growth projects has been agonizingly slow. However, that is what happens when a master limited partnership grows the business without taking on too much debt or issuing loads of equity.

This most recent quarter was a lot of the same: Modest progress, but little to show for it in the financial statements. Here's a look at the company's most recent results and what investors can make of this stock. 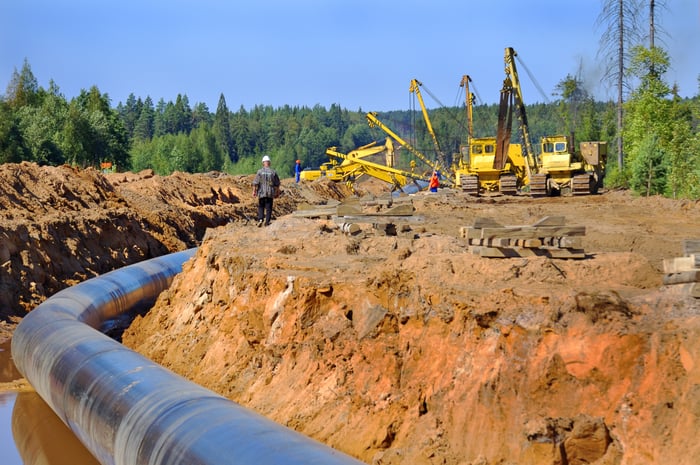 First, the mandatory statement about Boardwalk's results. The company's primary customer base today is natural gas power plants, which means that its results are very seasonal and comparing consecutive quarters doesn't do the company justice. It's better to focus on year-over-year results.

Boardwalk's results are a bit of a mixed bag this past quarter. Revenue was down ever so slightly, but EBITDA and cash flow were up, which doesn't make too much sense until you dig into the specifics. The decline in revenue has a lot to do with management's decision to sell its Flag City processing facility back in May. It was able to offset much of those revenue losses with lower employee-related expenses.

Other than this deal, the quarter was quiet from an operations standpoint. Boardwalk is still in the middle of construction of its most significant project, the Coastal Bend header pipeline, and it expects to put the pipe into service by the first quarter of 2018, and the contractual start date will be no later than the first quarter of 2019 regardless of Freeport LNG export terminal's operational status. 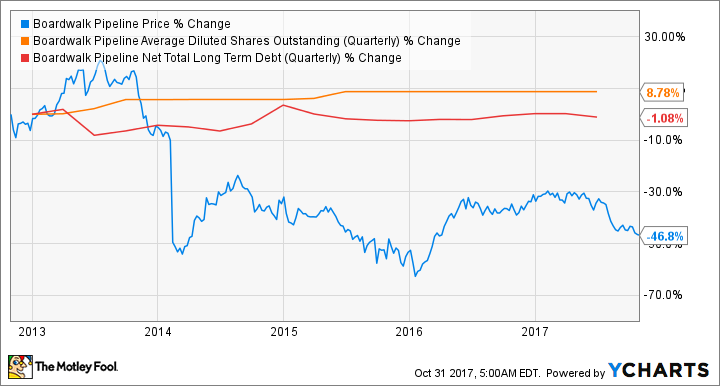 Boardwalk's other projects to build lateral pipelines to several natural gas power plants and petrochemical plants are continuing as planned and should all come on line between 2018 and 2019.

Here's CEO Stanley Horton explaining why Boardwalk decided to make the contract change with Southwestern now rather than wait until its expiration in 2020.

Since the original contract was signed, market dynamics have changed, and lower commodity prices and competitive pressures have reduced near-term drilling in the Fayetteville Shale. Subject to FERC's [the Federal Energy Regulatory Commission] approval, we agreed to reduce Southwestern's contracted capacities on some of the contracts on the Fayetteville Lateral for the remaining contract term, and Southwestern has signed new agreements that provide firm transportation commitments from 2021 through 2030 on our Fayetteville and Greenville Laterals as well as an interim agreement on the Greenville Lateral from April 2019 through 2020.

During the third quarter, we announced a nonbinding open season for the Permian to Katy, or P2K pipeline, a joint venture project with Sempra [Energy] that would transport up to 2 billion cubic feet a day of natural gas production from the Permian basin for delivery to the Katy and Houston Ship Channel demand centers.

It seems like it has been a lifetime since Boardwalk's management made the painful decision to cut its payout to shareholders to focus on building projects and improving the balance sheet. Since then, the company has made measured progress, but at a snail's pace.

Once that Coastal Bend header project is finished, things could change quickly for the company. It will open up lots of opportunities to supply natural gas to several LNG export facilities in the Corpus Cristi region. That, plus a direct line pipe from the Permian to the Houston Ship Channel region would also help to take out some of the seasonality of Boardwalk's results.

It's still going to take a couple of years for Boardwalk to realize its full potential, but the building blocks are there.