Please ensure Javascript is enabled for purposes of website accessibility
Log In Help Join The Motley Fool
Free Article Join Over 1 Million Premium Members And Get More In-Depth Stock Guidance and Research
By Rick Munarriz - Oct 31, 2017 at 10:06AM

The leading maker of wearable cameras reports quarterly results this week. Expectations are high for a stock that has risen 45% since its springtime low.

If GoPro (GPRO 0.54%) is staging a comeback as an investment, it's going to have to get through this week's biggest hurdle to keep its recent rally going. The top dog in wearable cameras reports quarterly results shortly after Wednesday's market close, and big gains -- the stock has roared 45% since bottoming out in March -- are on the line.

Analysts see a return to profitability for GoPro with revenue soaring 30% to $313.1 million. This should be its fourth period of double-digit revenue growth, though it comes on depressed top-line growth the year before that. GoPro's revenue target is actually 22% below where it landed during the third quarter of 2015. You have to go back to late 2015 to find the last time that GoPro's two-year revenue growth rate was positive in any given quarter. 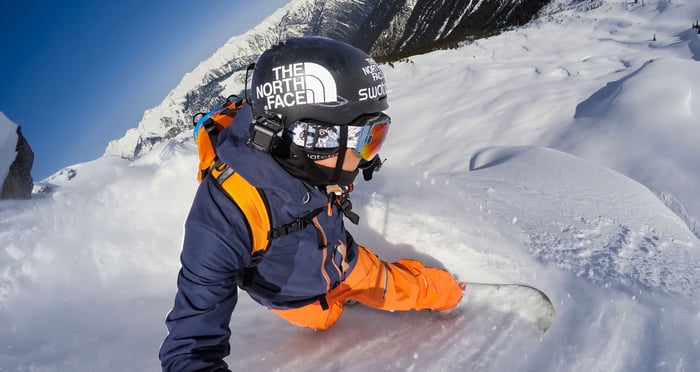 GoPro got a boost two weeks ago as Longbow analyst Joe Wittine upgraded the stock from neutral to buy. His channel checks show healthy initial market momentum for its Hero 6 action camera. Wittine feels that the stock is cheap, trading at early 2017 valuation levels when there have been enough execution improvements to warrant multiple expansion.

Wittine feels that the weakness in the shares earlier this month following the unveiling of Google Clips -- a $249 camera that records short clips without sound -- is creating a buying opportunity. We haven't even gotten to the potential of next month's rollout of Fusion, GoPro's first 360-degree camera. Hero 6 will play a much larger role in the current quarter's guidance than Fusion, but both new products could team up to drive home a huge seasonally potent fourth quarter.

Another potential green shoot is that GoPro announced last week that it was growing its office space for a software engineering division it runs out of Bucharest. Getting bigger in Romania may not seem like a game changer, but it suggests that GoPro is ready to start growing again on technological fronts after scaling back during its sales funk.

Momentum is working in GoPro's favor these days, and it also helps that it has beaten Wall Street's profit targets in each of the past three quarters. GoPro may not wind up earning much more than the $0.02 a share that analysts are modeling for the third quarter, but the trend suggests that it won't disappoint on the bottom line -- birthing the narrative that GoPro is profitable again.

It took GoPro a long time to get back into the double digits. A strong report on Wednesday afternoon will be necessary if it wants to stay there.