If GoPro can make itself the brand to beat in the consumer 360-degree camera category, it could become a growth stock again.

The action sports community is always pushing the envelope when it comes to capturing their experiences. That's how GoPro Inc. (GPRO 0.95%) first came to fame -- by giving people who enjoy jumping out of planes, skiing off cliffs, scuba diving, and the like a better way to record their adventures.

What made GoPro such a hit was that its cameras made experience capture accessible to the average person. Suddenly, it was no longer necessary to buy a specialized underwater camera to record someone's first scuba dive, nor to hire a professional videographer to capture a tandem skydive. A lightweight GoPro could capture all the action from its perch atop a watcher's head.

Now that (nearly) everyone has a camera in their pocket, though, the value proposition has changed for GoPro cameras. The action sports angle is still great, but as more smartphones become waterproof (or at least water-resistant), a GoPro has become more of a luxury than it used to be for those uses. And that makes Fusion the company's most important product this holiday season. 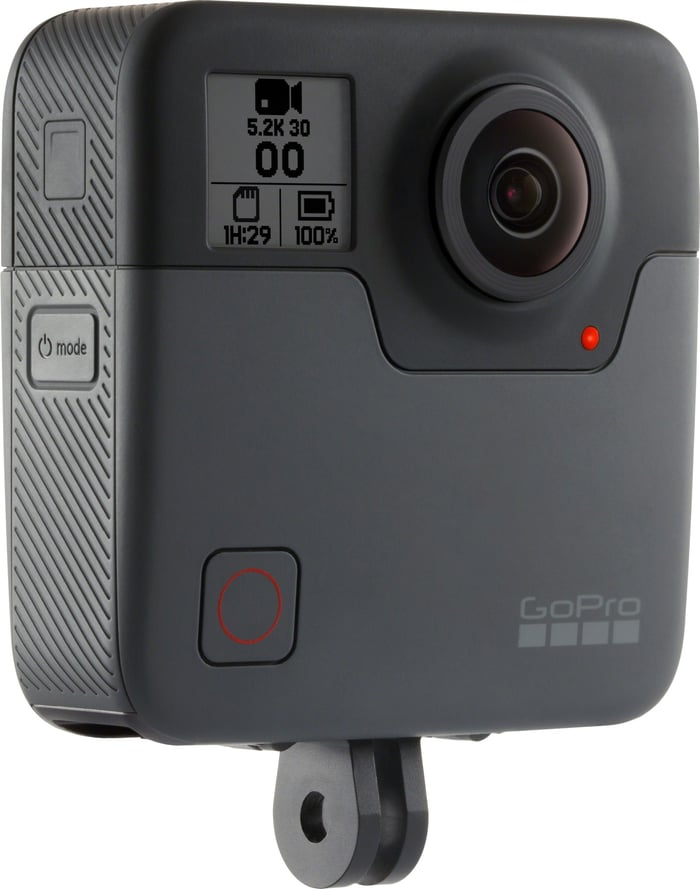 Exploring the world of 360

The Fusion makes 360-degree video accessible to the average person. It's something that's never been offered before in such a consumer-friendly device, and with a voice-control options and the simple Fusion Grip GoPro includes with the camera, it's a breeze to use. The camera even attaches to older GoPro mounts, so it can go on your helmet or wherever you've previously used their devices.

Fusion brings the immersive world of virtual reality to the consumer as well. Earlier GoPro devices tried to capture the essence of an experience like skiing a killer line on a mountain by letting us watch the action from the point of view of the skier; the ability to watch that same action in 360-degree VR adds a whole new level of immersion to such recordings. And by the looks of it, it's even easier to capture and share Fusion recordings than it was with the Hero cameras of just a few years ago.

When GoPro came out with its first action cameras, it was far less common for people to have smartphones in their pockets, but today, most people do, and the cameras embedded in them rival a GoPro for quality. But the 360-degree camera market is essentially smartphone proof. Such devices are much harder to make, and phones in their current form just aren't designed to contain all the components necessary. Having a leading role in a new market that isn't under imminent threat from improving smartphones would be a welcome change for the company.

Two things have me a little concerned about the Fusion's potential: Its price, and the expertise required for a user to produce great content with it. Even for a 360-degree camera, $700 is a lot to lay out, which may make it a tough sell for the holidays.

Editing content may be an even bigger challenge as the product moves deeper into the consumer market. GoPro seems to have made Overcapture and simple editing easy on a smartphone, but the company will also introduce an editing product called Fusion Studio that will allow users to make more precise edits. Unless it can show off an easy-to-use editing program -- like QuikStories for the Hero line -- these cameras may be too intimidating for the average consumer.

Even with those concerns, I still think Fusion will be a hit, and the biggest product for GoPro this holiday season. I'm even bullish enough to give the stock a thumbs up on My CAPS, where you can track a Fool's stock picks over time.

If GoPro can build a business in 360-degree cameras, and start increasing its installed base, that will be a good start and a welcomed growth driver for the company.