Wall Street has had a love-hate relationship with the provider of immersive movie theater experiences.

One of last week's biggest winners was IMAX (IMAX -0.59%), which soared 17% after posting better-than-expected financial results for the third quarter. There's been a lot of chatter about the slow demise of the local multiplex, but you wouldn't know that from IMAX's blowout performance.

Revenue soared for the company despite theater chains in general suffering from waning ticket sales. But there are both sweet and scary sides to this company's outlook. So, in honor of Halloween, let's go over both the tricks and the treats it may have in store for its shareholders. 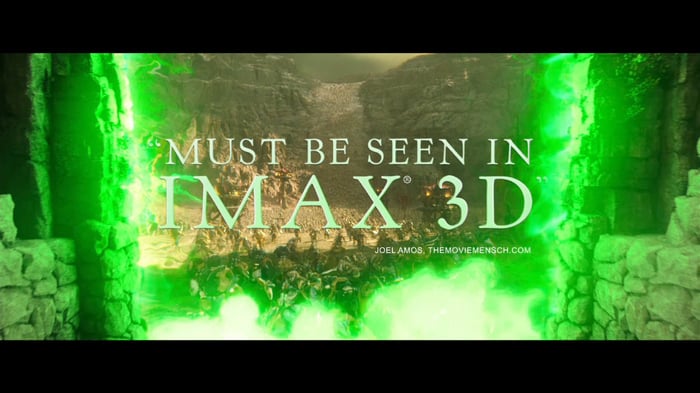 IMAX stock dropped to a four-year low this summer, proof that while the provider of super-sized cinematic experiences is faring better than its industry, it's not completely immune to its woes. Revenue may have moved higher in the most recently reported quarter, but it  clocked in lower in four of the five previous reports.

Folks aren't going out to the movies as often as they used to, and this summer we saw the industry experience its worst weekend in more than 15 years. There's also been a shift in consumer preferences away from 3-D screenings, which cuts into the premiums that IMAX-backed theaters can charge. Lower prices are also affecting IMAX as it expands into smaller markets, where movie tickets are typically cheaper. Things are rough, and IMAX announced a few months ago that it would be laying off 100 full-time employees, roughly 14% of its staff.

The company's third quarter was strong domestically, but box office receipts took a hit in China. This is problematic, as most of the 545 systems in its order backlog are slated to go into the world's most populous nation.

IMAX also isn't the only way to dress up a movie-viewing experience. Some theater chains that are already IMAX partners are testing theater upgrade initiatives that bypass the company entirely.

Then we get to MoviePass. Big-data analytics player Helios and Matheson (HMNY 10000.00%) has been a rollercoaster stock since it acquired a majority stake in MoviePass and slashed the monthly rate of its multiplex smorgasbord to $9.95 a month. Members can watch  a film a day in most theaters, making it a great deal for frequent moviegoers. The number of  MoviePass subscribers has grown from 20,000 to 600,000 in the past two months -- but the pass isn't accepted for IMAX screenings. The more MoviePass succeeds, the more it will nudge its growing subscriber base away from those premium-priced screenings.

That said, IMAX's quarter was a thing of beauty. Revenue climbed 15%, fueled by new theater installations that have pushed its global commercial network to 1,203 screens. Its screenings are also booming. IMAX recorded an 18% increase in domestic box office revenue (up 17% worldwide) despite the industry receipts plunging 14%. A whopping 23% of Dunkirk's domestic box office receipts came from IMAX showings, though those comprised only 10% or so of the total screens the film was shown on. The platform remains relevant.

Moreover, IMAX is hardly behaving complacently in the face of the threats to its bottom line. For example, it doesn't want to miss out on premium-paying customers who will skip a screening because the don't like wearing 3-D glasses. So it's shifting to offer more 2-D screenings even in cases where a 3-D version is available. IMAX is also making the most of its digital projectors to offer more than a single title on the same screen. It did this in China recently when two big movies on IMAX were playing, giving exhibitors the flexibility to go with the hotter release.

And, it's testing out virtual reality as a movie-enhancing experience. It has opened four VR Centre outlets in major world markets, offering something that won't be duplicated by a home theater system  anytime soon. Revenue-enhancing and cost-shaving initiatives should combine to provide strong earnings growth in the coming years -- as long as patrons keep coming to the movies.