Please ensure Javascript is enabled for purposes of website accessibility
Log In Help Join The Motley Fool
Free Article Join Over 1 Million Premium Members And Get More In-Depth Stock Guidance and Research
By Daniel B. Kline - Oct 31, 2017 at 6:01AM

There's nothing less cool than trying to be cool, but that hasn't stopped numerous companies from doing it. Countless brands have slapped emojis on their ads, tried to create clever memes, or used no-longer-clever text abbreviations (LOL, IMO, YOLO) to try to appear hip in an effort to woo millennials. More often than not, those attempts come off as genuine as the Pillsbury Doughboy's efforts to rap in a 1989 commercial.

It's a transparent, hopeless effort that has sunk restaurant chains including Chili's and Applebee's. Both of those chains learned that adding sriracha, kale, salted caramel, and whatever else young people supposedly like to their menus did not result in a flood of millennial customers.

The company wants to compete with private-label brands from rivals including Amazon.com and Target. These aren't the generic store brands of old, but basic efforts at house labels such as Whole Foods 365. These new private labels try to be hip and in the moment.

"Uniquely J is yet another way Jet.com is innovating for the metro millennial," Jet.com spokeswoman Meredith Klein told The New York Post. "From the boldly designed packaging, to the fun, witty label copy and quality ingredients -- everything was designed with this metro consumer in mind." 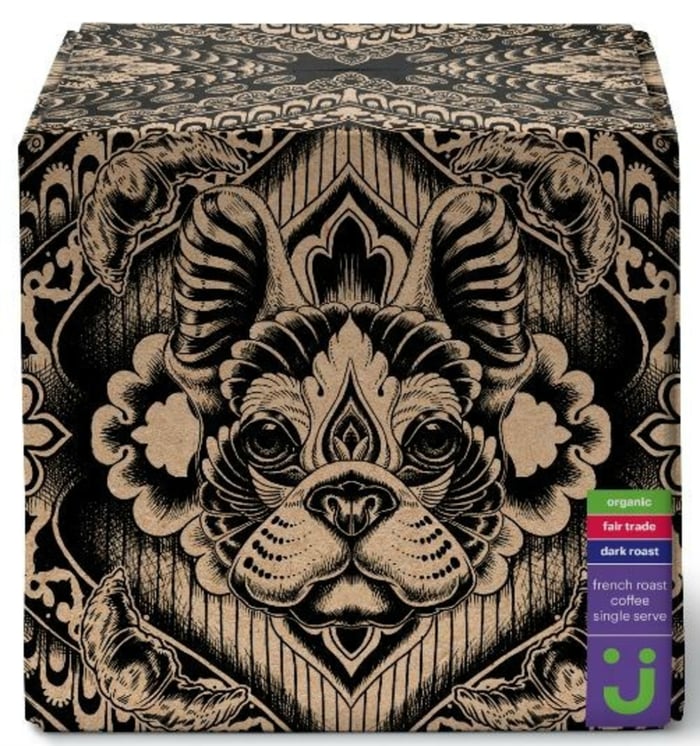 The coffee box packaging may be too over the top. Image source: Wal-Mart.

The good news for Wal-Mart is that the customers Uniquely J is targeting probably don't read The New York Post. In actual appearance, the new product line doesn't openly use the word "millennials," nor does it go too over the top using slang to blatantly pander.

Initially, the line features 50 products spanning coffee, cleaning, laundry, pantry, paper, and food-storage categories. The packaging, which the company called "bold and beautiful," can be a little in-your-face -- the coffee box that looks like an Ed Hardy T-shirt and the slang-filled freezer packaging are a bit much. But for the most part, Wal-Mart avoided the urge to try to be like the cool kids and made Uniquely J, well, unique but not too obvious.

In addition, the line is well priced and does tick off many of the boxes that appeal to millennials. The cleaning products are made of plant-based ingredients, the coffee is USDA certified organic using Fair Trade-certified beans, and the food-storage bags are made from BPA-free plastics.

A YouTube video launching the line does have some cringe-worthy moments. It's hard to know if the company was going for a sort of self-mocking, we-know-we're-not-cool-vibe or if it actually thinks the ad is clever. Still, the the product line mostly delivers, and as with the Post article, the target audience probably won't see the promo video.

Put simply, there are a lot of millennials, and they'll be buying stuff for a long time to come. Pew Research reported in April 2016 that "millennials have surpassed baby boomers as the nation's largest living generation." Defined as people ages 18-34 in 2015, the millennial group now has 75.4 million members, surpassing the 74.9 million baby boomers (ages 51-69).

Millennials are at an age at which they're either starting to spend money independently from their parents or starting up their own households. That makes them an attractive marketing target, because any loyalties they build could pay off for years, if not decades, to come.

Wal-Mart has mostly threaded the needle with Uniquely J. The company tamped down its initial "it's for millennials" proclamation and mostly delivered a line that targets the intended audience without being too blatant about it.