Utter the word "millennial" in a crowded room, and you'll get a mixed reaction of sympathetic smiles and eyerolls. Millennials tend to get a bad rap for being entitled and self-absorbed, but the reality is that many members of the youngest working generation don't expect fantastic jobs to just land in their laps. Rather, they're pushing themselves to succeed at the office, and have work matters on the brain more often than not.

Millennials are so fixated on work, in fact, that it may be messing with their quality of life. According to a study by wellness app Happify, millennials are placing a ton of significance on their careers, and it's making them unhappy as a result. Specifically, when asked what they're grateful for, millennials' responses centered around work-related milestones, like getting a new job or having positive interactions with others at the office. Furthermore, when asked to outline their long-term goals, millennials were quick to focus on their careers -- specifically, aspects like earning more money or finding jobs with better benefits. 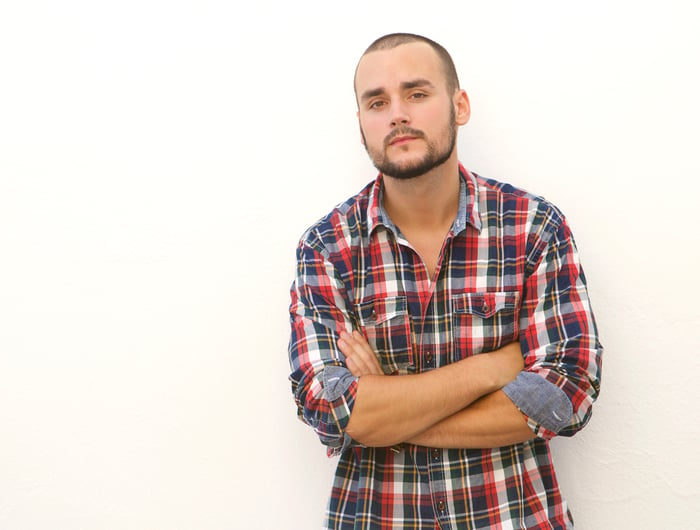 Not only are millennials work-obsessed, but they're actively stressed about it -- and they're very much aware of that stress . But many aren't taking steps to do something about it, and that's probably because most younger workers just plain need the money. According to the U.S. Census Bureau, millennials earn $2,000 less than their parents did, on average, at a comparable age. They're also more likely to not only live at home, but potentially live in poverty.

Not surprisingly, more than 40% of millennials aren't yet saving for retirement, and a big reason boils down to their lack of significant earnings. Of course, the fact that millennials also have some of the highest student debt levels in history doesn't help. The average millennial owes roughly $30,000 in college loans, and given what most younger workers are making, once you factor in those loan payments, there's not a ton of room for savings.

There's a lot of pressure on millennials to rapidly advance their careers, but a lot of that boils down to money. According to the U.S. Bureau of Labor Statistics, the average worker aged 20 to 24 earns $32,500 a year, while the average worker aged 25 to 34 makes $50,232 annually. And while the latter might seem like a decent amount of earnings, it's hardly enough to sustain a 20-something worker who lives on his own and is liable for a massive monthly student debt payment.

In fact, here's how that $50,232 a year might break down. Assuming we're dealing with a single tax filer with no major deductions, I'll assume that you can take 25% of that number out right off the bat for federal and state income taxes and payroll taxes. That leaves our sample millennial with $37,674 a year, or about $3,140 a month. However, since the average monthly student loan payment for borrowers aged 20 to 30 is $351, that after-tax figure gets slashed by more than 10% almost automatically. Factor in housing payments (since not all millennials live at home), transportation, healthcare, food, utilities, clothing, and whatever other basic necessities are needed to function, and it's no wonder millennials not only aren't saving, but are constantly pushing themselves to earn more.

While it's natural, and even respectable, for millennials to focus on work and constantly strive for raises and promotions, there comes a point where happiness needs to trump career status. Or, to put it another way, if some of these millennials don't slow down and refocus their priorities, they're going to fall victim to serious burnout sooner than they think. And that's the sort of thing that can derail an otherwise successful career.

Another thing millennials must realize is that unlike older generations, they're the first batch of workers to be warned to save for retirement from the get-go. This means they have a key opportunity to amass some respectable savings for the future, provided they start early.

Of course, socking away a serious sum of money is easier said than done when you only have a $50,000 salary to work with, but the beauty of retirement accounts like 401(k)s and IRAs is that they allow small contributions to grow into much larger sums over time. Case in point: Saving just $100 a month for 40 years will result in a $240,000 nest egg, assuming an average annual 7% return on investment -- which is more than feasible with a stock-heavy portfolio.

Though it's fair to say that most millennials haven't yet paid their dues, they certainly face their own set of financial and career-related challenges. In other words, maybe they're not as spoiled as we all thought, and, if anything, deserve a little compassion and a whole lot of slack.