We all know that it's important to have health insurance. And if it were free, we'd all sign up and get some. But health insurance is the opposite of free -- it's expensive. And that means that inevitably, a large number of us get priced out.

So just how bad is the problem? According to the Gallup-Sharecare Well-Being Index, 11.7% of Americans were uninsured as of the second quarter of this year. That's a 0.8-percentage-point increase from the end of 2016, at which point 10.9% of the population was without insurance. All told, an estimated 2 million Americans seem to have dropped their coverage between then and now. 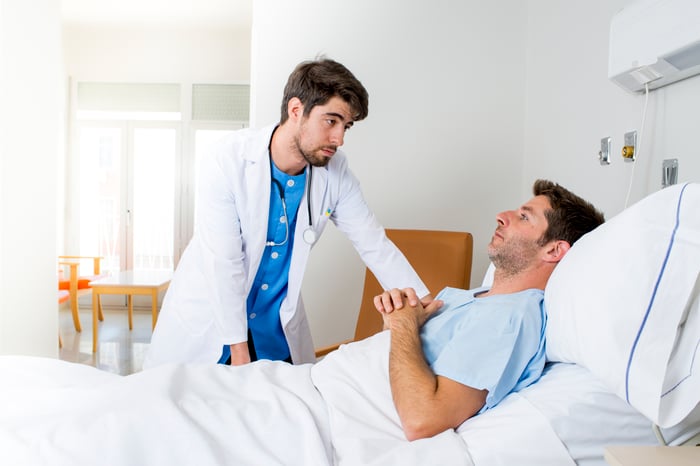 Why the change? For one thing, premiums rose significantly across the board this year for those who don't qualify for federal subsidies, and many folks just couldn't afford them. Furthermore, a large number of insurers pulled out of the open exchange, leaving consumers with a narrower range of choices for coverage. And let's not discount the role the Trump administration's healthcare bill may have played in all of this. With uncertainty about the future of healthcare abounding, many folks have probably just given up, figuring they're better off saving their money for medical emergencies than struggling to pay the premiums they can barely afford to keep up with.

Still, pricey as today's health plans might be, going without health insurance could wind up being a very costly mistake. And if you're not careful, you might end up spending far more money on healthcare than you ever expected.

It's easy to see why so many Americans would rather go without health insurance than cough up those monthly premiums. Though insurance costs vary based on a number of factors, including age and geographic location, according to eHealth, the country's largest private online health insurance exchange, the average cost of an unsubsidized individual monthly premium this year is $393, which is 22% higher than the average $321 premium during 2016's open enrollment. The average unsubsidized monthly cost for a family plan, meanwhile, is $1,021, which represents a 23% increase since 2016's open enrollment.

Clearly, that's a lot of money to spend. But there's a reason many of us pay an arm and a leg for insurance, and it's to protect ourselves from the unknown. According to Healthcare.gov, the average cost of a three-day hospital stay is around $30,000. Now imagine you're currently forking over $393 a month for health coverage, or $4,716 a year, and you never use that insurance once -- until you suddenly get injured and are rushed to the hospital, where you're forced to camp out for several days. Suddenly, that insurance more than pays for itself. Even once we factor in a deductible, which this year is $4,328 on average, and a copay, you're still coming out a good $15,000 to $20,000 ahead.

Even if your health is great, and you don't tend to use your insurance often, you never know when an unexpected medical expense might fall in your lap. And without insurance, you could suddenly find yourself on the hook for thousands upon thousands of dollars in health-related bills. In fact, medical debt is currently the No. 1 reason Americans are forced to resort to bankruptcy. Without insurance, healthcare costs can rapidly skyrocket, and with that comes the potential for financial ruin.

If you don't have any known health issues and aren't on medication, you can probably get away with a low-cost, bare-bones health plan so you're covered in case an emergency strikes. But don't make the mistake of forgoing coverage entirely, especially if you have the option to cut out other expenses to afford your premiums.

Sure, nobody wants to give up restaurant meals and fun purchases to pay for health insurance, but if you don't, you might find yourself in a desperate financial situation the second you get hurt. Even if you're truly living paycheck to paycheck without much wiggle room, it still pays to make sacrifices to bring those premiums within reach. You might, for example, consider downsizing your living space, or making other such lifestyle changes. If you don't, you'll be compromising your financial security -- and, possibly, your health -- in more ways than one.