Please ensure Javascript is enabled for purposes of website accessibility
Log In Help Join The Motley Fool
Free Article Join Over 1 Million Premium Members And Get More In-Depth Stock Guidance and Research
By Anders Bylund - Oct 31, 2017 at 9:57AM

Big-screen OLED TVs provide lots of fuel for the company's growth fires today, but the real long-term play is found in a different market.

Universal Display (OLED -2.54%) has been on a tear in recent quarters. Trailing sales have increased by 47% over the past two years. At the same time, share prices nearly tripled and EBITDA earnings soared 266% higher.

Those in the know have seen the organic light-emitting diodes (OLED) researcher graduate from smartphone screens to larger tablet displays, and now Universal Display's OLED solutions are hitting the mainstream for big-screen television sets. That's all great, because larger OLED screens translate into fatter revenue streams to Universal Display. This is how the company and stock climbed so far and so fast, and bigger screens will remain the core investing thesis for us Universal Display owners for a while yet.

But in the long term, even an explosion of 6-foot OLED TV sets will look like child's play next to the company's real value trigger.

Lots of light in the tunnel ahead

OLED elements happen to be excellent light sources. Unlike LCD displays, OLED pixels emit their own light by teasing photons out of their organic semiconductor structures. In plain English, running current through an OLED device creates light in a very direct and energy-efficient way.

This makes OLED panels an excellent light source for much more than digital displays. It's one of the most efficient ways to turn electricity into usable lighting today, and the flexible nature of OLED panels unlocks plenty of reasons to prefer this solution over alternatives such as fluorescent lamps or inorganic LED bulbs.

Since OLED panels can be made in virtually any shape including curved surfaces and flexible panels -- even rollable ones -- the lighting solution can often be placed closer to where the light is needed.

"Whereas LEDs are concentrated sources of bright light, OLEDs can be configured as larger-area, more diffuse light sources, which may be more practical for general ambient lighting because the soft light can be viewed directly, with less need for shades, diffusers, lenses, louvers, or parabolic shells," says the U.S. Department of Energy. "The diffuse light from OLEDs allows them to be used very close to the task surface without creating glare for the user, which means that less total light can be used in order to achieve desired illuminance levels."

"Their light is more flattering, softer, and more forgiving than any other light source, which is why I call it the 'light for well-being'," said Philips Lighting head designer Rogier van der Heide in an interview with OLED light-fixture maker Dilana Lighting. 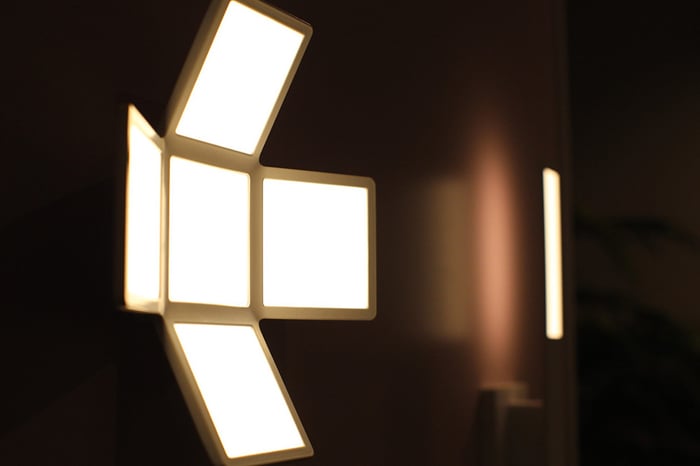 OLED lighting is in the early stages of commercialization these days. Market research firm Yole Developpement estimates that OLED lighting sales stopped at just $30 million in 2015 but should reach $1.5 billion by the year 2021. That's just the beginning of a bell-shaped growth curve, and the total addressable market should reach into hundreds of billions of dollars in 2030 and beyond. Universal Display collects a small share of that top-level revenue flow, but that's enough to power massive growth over the next decade.

The industry is gearing up to support this hockey-stick growth chart. LG Display (LPL -1.76%) recently opened the world's most advanced OLED lighting factory, ramping up toward mass production of lighting panels by the second half of 2018. Chemical manufacturing giant PPG (PPG -2.45%) just doubled its OLED materials production capacity, helping the Universal Display partner keep up with growing demand for these materials.

Manufacturing prices are plunging thanks to these increased economies of scale, dropping from $450 per thousand lumens of lighting capacity in 2013 to less than $100 today.

I fully expect Universal Display's sales and cash profits to multiply many times over, driven by larger screens at first and ubiquitous lighting opportunities later on. Share prices are sure to follow suit. Just follow the light at the end of the tunnel.