Novartis and Gilead Sciences could end up crowding Juno Therapeutics out of this important market, but JCAR017 can still become a blockbuster if it puts up best-in-class safety in its trials. 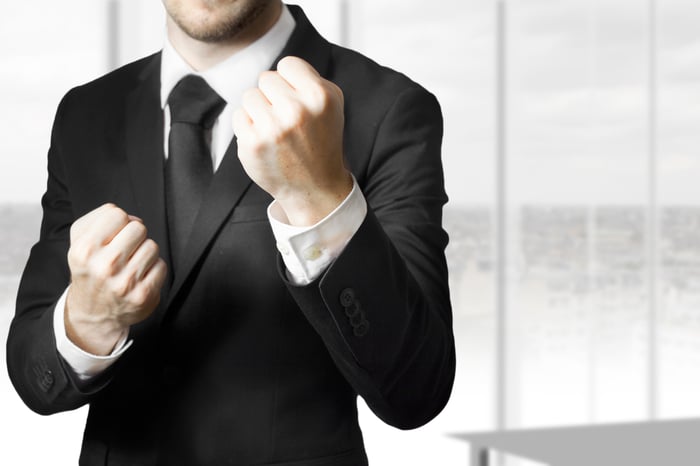 The advanced DLBCL market includes thousands of patients per year, and the CAR-T that delivers the best efficacy and safety in trials will be the one that ends up capturing the lion's share of this market. Initially, however, it's unclear which drug that will be.

Novartis hasn't shared the six-month data it gave the FDA in support of Kymriah's approval in DLBCL yet, but in June, the company said the three-month overall response rate (ORR) was 45% and that 37% of patients achieved a complete response.

In terms of safety, 26% of Kymriah patients experienced grade 3 or higher cytokine release syndrome (CRS), a potentially life-threatening condition, but there were no cases of cerebral edema, or brain swelling. As a refresher, it was cases of cerebral edema that caused Juno Therapeutics to shutter development of its first-generation CAR-T drug JCAR015 last March. In Kymriah's trial, 13% of patients also experienced a grade 3 or grade 4 neurologic adverse event.

Comparatively, Yescarta posted an ORR of 82% in DLBCL patients at the three-month mark, with 49% of patients achieving a complete response. The prevalence of grade 3 or higher CRS in Yescarta's trial was 13%; for neurological events, it was 28%.

Assuming it can deliver similar response rates to Kymriah and Yescarta in DLBCL, then JCAR017's success will depend heavily on if it can best Novartis and Gilead Sciences in terms of safety. Fortunately, that may just happen. Juno Therapeutics reported safety data earlier this year that suggests JCAR017 might be a best-in-class option.

At the three-month mark, only one person of 54 participating in JCAR017's study had developed a grade 3 or higher case of CRS. Also, only 18% of patients suffered from severe grade neurotoxicity. Couple that safety profile with solid efficacy -- an ORR of 51% and complete response rate of 39% -– and you have a recipe that could allow for JCAR017 to leapfrog Kymriah and Yescarta to become the most widely used CAR-T in DLBCL.

Juno Therapeutics' shares could tumble if the final analysis of JCAR017 only shows "me-too" efficacy and safety, but if best-in-class safety is confirmed when Juno's trial wraps up, an argument could be made that Juno Therapeutics is undervalued. After all, Gilead Sciences spent $11.9 billion buying Kite Pharma to get its hands on Yescarta, and Juno Therapeutics' market cap is only $5.4 billion currently.

Admittedly, it's uncertain how this battle will shake out, so Juno Therapeutics' stock is too risky for most investors -- at least until the final data comes out next year.

Nevertheless, risk-tolerant investors might want to use weakness in Juno Therapeutics' stock as a buying opportunity because JCAR017 still has a good shot at becoming a blockbuster drug, despite the fierce competition.